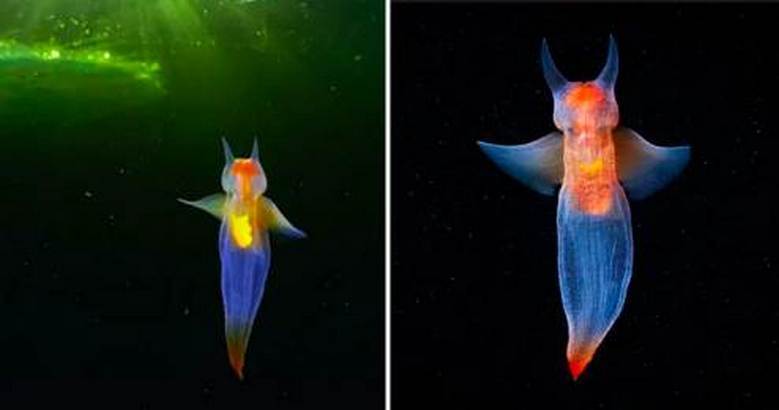 A marine biologist and photographer has spent his whole life studying the ocean. He recently captured some extraordinary photos and video of a tiny vertebrate known as the sea angel.

Alexander Semenov captured this video of a sea angel. This is a species of slug, named for the wing-like feature on its body. These unique creatures have luminescent bodies and live in freezing-cold northern waters.

“Clione limpusine” is their scientific name and they are part of the gelatinous mollusks family. Although they are one of the most studied species in neurobiology, there are still many mysteries about these aquatic creatures.

With the size of 3-5 cm, fluttering that look like wings, and mystic color of blue, red and yellow, it looks like a little flame.

According to Semenov, around February they start to appear under a layer of ice that covers the sea. Sometimes there are can be as many as 500 sea angles per cubic meter of water. However, once the water gets hot, they disappear. Where they go is still a mystery, but next winter they appear again under the ice.

“It is only known that they can survive without food for more than six months, significantly reducing their size during starvation. So far, no one has figured out how to track the life of a tiny angel in the Arctic seas all year round to find out where they are going,” Semenov wrote on Flikr.