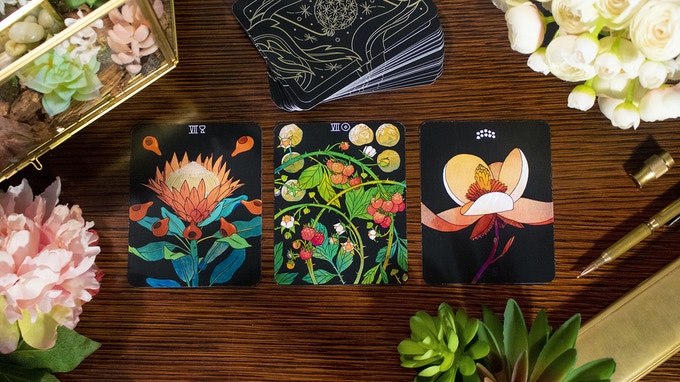 BOTANICA Tarot Deck Is a Gorgeous Set For Divination

For hundreds of years, humans have used Tarot cards as a means to gain insight into their lives. Whether it’s asking about your past, present, or future- interpreting Tarot cards has been a way to answer questions and derive meaning. For those who are less serious, Tarot cards can be a fun activity for a group of friends. At one point or another, we’ve all seen the traditional images of Tarot cards like the Lovers or the Tower. Well Beehive Books has taken those famous images and transformed them into something entirely new-gorgeous paintings of flowers.

The BOTANICA Tarot deck “marries the tradition of Tarot to a lexicon far more ancient: the natural vocabulary of life on Earth.” This 78-card deck is filled with traditional paintings created by illustrator Kevin Jay Stanton. Each Major Arcana card is represented by a single plant or flower. For instance, The Hermit is a Chinese Lantern while The High Priestess is an Elderflower. Minor Arcana cards are plants combined with objects from their suit.For instance, the Seven of Wands features a Thorn Apple plant alongside Japanese vajra (Buddhist ritual objects) that serve as the wands.

Find yourself unfamiliar with plant lore and mythology? Luckily, each deck includes a booklet that names the plants and objects on each card. This booklet also explains the symbolic meaning behind each plant and why it was chosen for that particular Tarot card. So while this set is beautiful, it can also be a fun new way to explore Tarot and learn some cool plant facts along the way. This deck has already far exceeded its original kickstarter goal and has an astounding backing of almost $450,000. Thanks to that, there are multiple editions of the deck to choose from with some cool extras. You can check them all out at the deck’s kickstarter page. Personally, the Enchanter’s Edition with the beautiful terrarium for your deck seems hard to pass up.

So, if you are a Tarot enthusiast or someone looking for a beautiful deck to show off to guests, this could be the set for you. After all, we could all use a little more nature in our lives while stuck inside the walls of our homes.