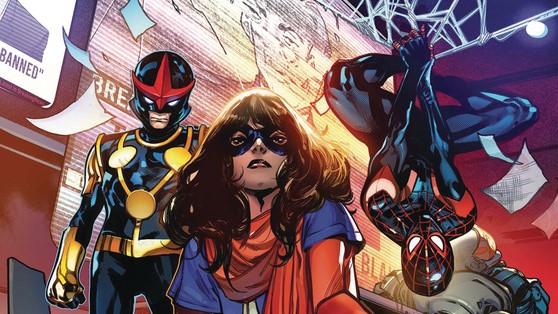 It’s the ‘Super Human Registration’ Act All Over Again !

Champions, a book showcasing some of Marvels finest teenage superheroes, has been off the shelves for a couple of months now. But with this new Marvel event Outlawed , Nova, Miles Morales Spider-Man and Ms. Marvel will take on a government that wants to take down teenage vigilantes.

Can this book execute the beginning of this story line? Let’s jump into Outlawed #1.

The issues cracks open with a court hearing, where leading figures in the super hero community and the members of the Champions speak at a Congressional hearing.

While trying to defend a young activist Ailana Kabua from an unknown attack (Assumed to be Roxxon), Some mercenaries and a dragon attack the high school she was speaking at. After a group miscommunication causing a malfunction in Viv Vision, the area gets destroyed. This is the enticing incident that kicks off this event.

After passing what they’re calling Kamala’s Law, the government establishes the Child-Hero Reconnaissance and Disruption Law Enforcement( C.R.A.D.L.E.). This most likely to be our main physical antagonist in the event.

Writer Eve Ewing does a good job of setting up this event, which is similar to Marvels Civil War(I) but because it involves underage heroes it has different context. In an interview with Checkersaga she goes further in depth with how the law works.

” One of the loopholes of the legislation is that they are allowed to maintain super-heroing if they’ve a government-approved mentor.” Said Ewing. ” So, what does it imply to be a hero who has extra ties to the grownup superhero group, versus one who’s on the fringe? “

Since the Champions was founded on helping where other cannot, it’ll be interesting to see who works with the law and who’s outside it.

Kim Jacinto is the artist for the issue and the line work feels very active, as expressions are exaggerated to exemplify the emotion each character feels. Espen Grundetjern as the colorist, brings this subtle matte coloring which works well with the figures, regardless of if it’s with action or a close-up.

The Efficacy of the Titles Central Question

This is where the central argument comes into play for the event ; If the system worked we wouldn’t need heroes ; but its wrong that these teenage heroes have to take on this responsibility. But if they don’t who will ?

Since the actions of some governmental bodies are unchecked, and billion dollar companies operate against the health and well being of its consumers- the system isn’t perfect. So because dangerous people are able to operate, heroes take the charge of fighting against them. As the mission statement of the Champions is to help the youth no matter the country, no matter the struggle. The Kamala Law is a direct roadblock to these heroes, and it’ll be interesting to see how it all plays out.

One finale note, I can’t help but wonder what would’ve happend if Kamala was out in the field, since she is, usually, in charge of the group. And while they’ve miscommunication before, I could be mistaken in thinking that they were much more coordinated in Jim Zubs run. But then again, everyone has off days, especially super powered teenagers

The Champions title is scheduled to start another run in April, with “Outlawed” tie-ins in Miles Morales Spider-man and the Magnificent Ms. Marvel. Also two new books, New Warriors and the Power Pack, will kick off that month starting with the “Outlawed” story line.

So What’s your opinion of this event? Are you excited for these issues to be explored? Let us know in the comments down below!