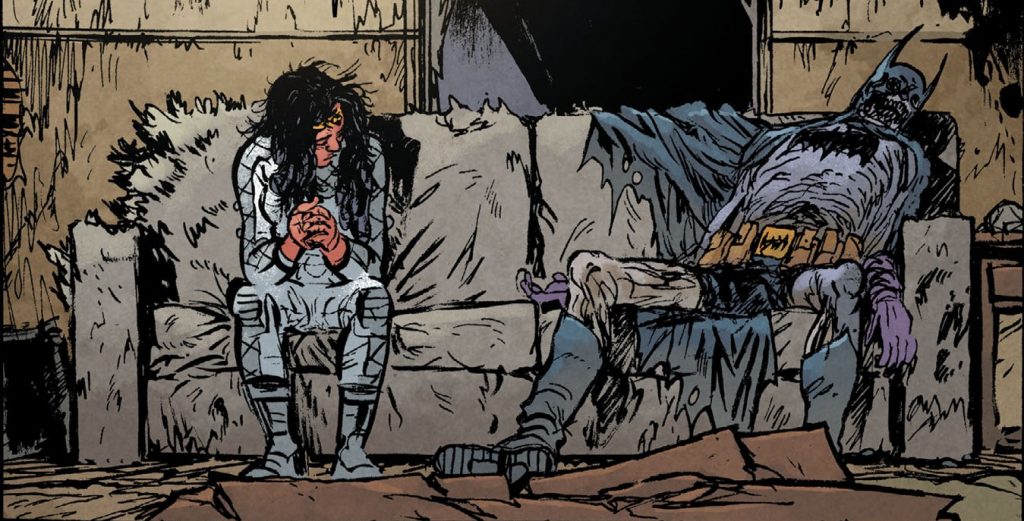 The Last Hero in the End of Days

When you look at the biggest alternative stories about the DC trinity of Superman, Batman, and Wonder Woman, its Wonder Woman who is usually at the back of the list.

Many Writers and artists have taken their shots to explore the intricacies of Batman and Superman, from Superman: American Alien to Batman: Last Knight on Earth.

If your fixing for an alternative, as in outside the main continuity story for Diana Price, DC’s got your back

Wonder Woman : Dead Earth explores a world where the apocalypse has come and Diana Slept Through it .

Well, it’s more complicated than that, so lets get into it.

The Story (Minor Spoilers Ahead)

The premise is a tale as old as time; take an iconic hero and drop them into a world where humanity is dwindling, hounded by all manner of twisted creatures. Wonder Woman finds herself with little memory the worlds fate.

What happened to her ? What are the monsters ? Where are the other heroes? These are the questions she must answer while being the only hope humanity has left.

Daniel Warren Johnson (Space-Mullet, Extremity and Murder Falcon) writes and does the art for the book. Operating under the DC Black Label, he plans to take this story and explore Wonder Womans relationship to humanity and its limits.

” I was trying to come up with a world to make Diana think, ‘Is what I believe truly worth it, when everybody else feels so differently?’ said Johnson to Jim Lee on DCComics.com. “That’s where the impetus of the story came from.”

With this idea in mind, the story will not only push our heroine to her physical limits, but her empathy and optimism as well.

The Art and Design

The most obvious aspect of the books design is its size, 8 1/2 inches by 10 7/8. With a larger canvas to work with, Johnson can pull off different layouts and exaggerate splash pages.

Within this space, the ink art comes across as very gothic – dark, rough with almost like they were carved into the page. This is contrasted by the coloring which is not only vibrant its saturation is able to watch the scene.

The landscapes and backgrounds can change from a painted scene of poured color to jagged dark. Every individual is very expressive with emotion practically pouring out of each face.

What Are You Waiting For

So with a Wonder Woman book centered about her resolve and a scratchy yet vivid art style, Wonder Woman: Dead Earth presents a tale of despair and hope.

Dead Earth is a four part book with art and story by Daneil Warren Johnson, color by Mike Spicer with lettering by Rus Wooton. Two issues are currently out, with part three in stores April 29.

You can pick up the book from your local comic book shop, Amazon and wherever comics are sold.