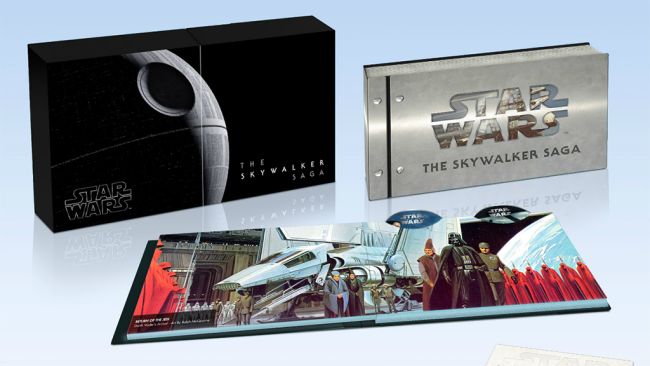 The force is strong in this box set! A massive box set encompassing the entire Skywalker Saga in 4K Ultra HD Blu-Ray is coming soon. At its base, the collection contains the nine core entries of the Skywalker Saga- The Phantom Menace, Attack of the Clones, Revenge of the Sith, A New Hope, The Empire Strikes Back, Return of the Jedi, The Force Awakens, The Last Jedi and The Rise of Skywalker. Eighteen discs of the box set hold these movies- nine of the films in 4K Ultra HD Blu-Ray and nine in standard Blu-Ray. Notably, side stories such as Rogue One and Solo are not part of this collection.

There’s more to this set than just the nine films though. An additional nine discs hold 26 hours of in-depth special features. That adds up to a staggering 27 discs in the entire collection. Some truly beautiful artwork can be seen inside the set as well. Of course, Darth Vader has to be in the center of that artwork as one of the coolest characters in the franchise. This collection will be available exclusively at Best Buy for all U.S. buyers. It will be available starting March 31 and is selling for a whopping $249.99. If you are in the UK, you can pre-order Star Wars: The Skywalker Saga set exclusively on Amazon for £199.99. It will release for the UK on April 20. So you better start working some overtime and saving now, because this collection will be well worth the price.