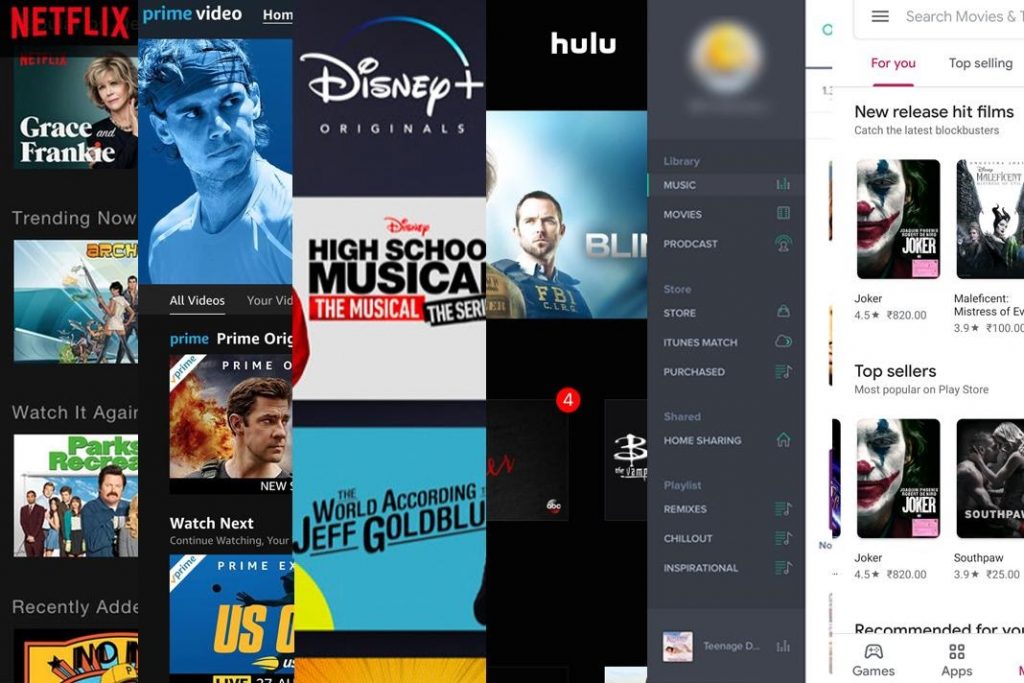 With the invention of the Television, it has paved the path towards becoming a primary source of entertainment for many years. Starting from new movies, TV shows, and exciting content, it has become a part of everyone’s daily life.

However, the days of cabled TV have become a thing of the past in this digital world. Recently, the majority of people have started using Online Streaming services. This was made possible with the introduction of Smart TVs and its growing popularity.

Now, let us take a look at some of the best online streaming services for this New Year 2020. These have been ranked based on content, pricing, and other factors. It has already garnered millions of subscribers and has a worthy amount of content on its platform.

Currently, Netflix is the market leader in online streaming services. It is also one of the earlier   companies that came into existence even before Google. Incidentally, it started out by sending                 movie titles in the form of Discs or VHS by mailing it to the subscriber.

Subsequently, they switched to an online streaming service. However, you can still receive the shows in disc format, if you demand it.

Netflix also hosts the biggest online library as compared to other streaming services. You can find content from various parts of the world. Nowadays, smartphones, Smart TVs and consoles come with Netflix pre-installed in it. Thus, you can stream content on these platforms along with Google Chromecast and TV sticks.

Mainly, there are three basic packages for a Netflix subscription.

Moreover, Netflix is one of the few streaming services that produce their own content. Some of these shows have even won several awards such as Stranger Things. In comparison to other streaming services, Netflix shows and movies are much creative and interesting.

The second contender on the list is Amazon Prime Video. It was called Amazon Unbox and launched in the fall of 2006. Currently, it is the second-largest streaming service provider with a vast online library. Recently, it has started making its own original shows as well.

You can stream Amazon Prime Video on your smartphone, Smart TV and TV sticks as well. However, its movie collection is not as big as Netflix. Generally, you can get Amazon Prime Video if you have subscribed to Amazon Prime. It is a special subscription by Amazon where you can avail a range of benefits. The most notable ones include the following.

Collectively, you can avail all this at only $12.99 per month where you can stream simultaneously in 4 devices. You can choose to pay for the yearly subscription as they give a good discount. You can also avail Amazon Prime Video subscription at $8.99 per month.

Here, you can find thousands of shows, movies, cartoons, and animated shorts. Mostly, you will only get content provided by Disney, Pixar, Star Wars, Marvel and National Geographic. Starting from 2020, all Marvel franchises were removed from other streaming services that were exclusive to Disney Plus. This is also one of the reasons why Marvel shows were canceled on Netflix.

Currently, there is only one basic subscription which is priced at $6.99. With this, you will be able to enjoy simultaneous streaming in up to 4 devices at once. You can also enjoy Ultra HD 4k content with the basic plan.

Along with this, Disney Plus is releasing various originals of its own as well. The Mandalorian experienced immense success on the day of its launch. Alternatively, you can avail the bundled package where you will get Hulu and ESPN+ as well. This package is priced at $12.99 at a great bargain. Individually, Hulu and ESPN+ cost $5.99 and $5 respectively.

While other streaming services are best for watching shows and movies, Hulu is the best platform for streaming Live TV. Similar to other platforms, it can run on Smart TVs, smartphones, desktops, Google Chromecast and TV sticks. Apart from this, it is the only streaming service that can run on Nintendo Switch.

Some of the popular channels that you can watch include Comedy Central, Fox and NBC. Hulu has its own original shows as well. Incidentally, it has two main membership plans which are Basic and Premium.

The Basic membership costs only $5.99 but you will see adverts while streaming.  However, the Premium version doesn’t show ads and is priced at $11.99. Apart from this, there is a separate option for Live TV which can be bundled with these memberships.

However, you can stream in up to 2 devices in a bundled package with Live TV. Also, you can increase the number of screens but it will cost you $14.99.

Although it has been available for the past decade, most people forget that you can stream movies through this app store. You can easily buy or rent movies to stream on your smartphone or tablet at a certain price.

However, both the Apple TV Plus and Google Play Store have a vast online library of almost all the movie titles. The prices differ from movie to movie. For instance, you can find the latest movies at a higher price as compared to old ones. Also, there are multiple sales going on from time to time. Therefore, you can buy it during such online sales.

Google Play Store and Apple TV Plus is a good streaming platform when you want to watch a specific movie title. You cannot watch any TV series and you have to pay for each movie. Additionally, you can rent the movie instead of buying it as well. This will allow you to stream, watch or download the movie. You can do this at any time within 30 days. However, if you start watching the movie, you have only 48 hours to finish it.

We have listed the most popular and the best online streaming services available today. Therefore, you can choose from among them according to your own taste and preferences.

Hulu is more suited for Live TV shows while Netflix and Amazon are suited for original shows and movies. Accordingly, you can go to Apple Tv Plus or Google play store if you only want to watch a specific movie. This is a good alternative for those titles that are not available on other platforms. However, Disney Plus has proved to be an amazing and interesting contender.

The famous Marvel shows from Netflix will now be removed from the platform. It will be made available on Disney Plus. Also, Disney Plus streaming service offers some amazing originals like The Mandolarian and other upcoming Marvel shows. Thus, Disney is an excellent choice for Marvel, Star Wars and Disney fans.