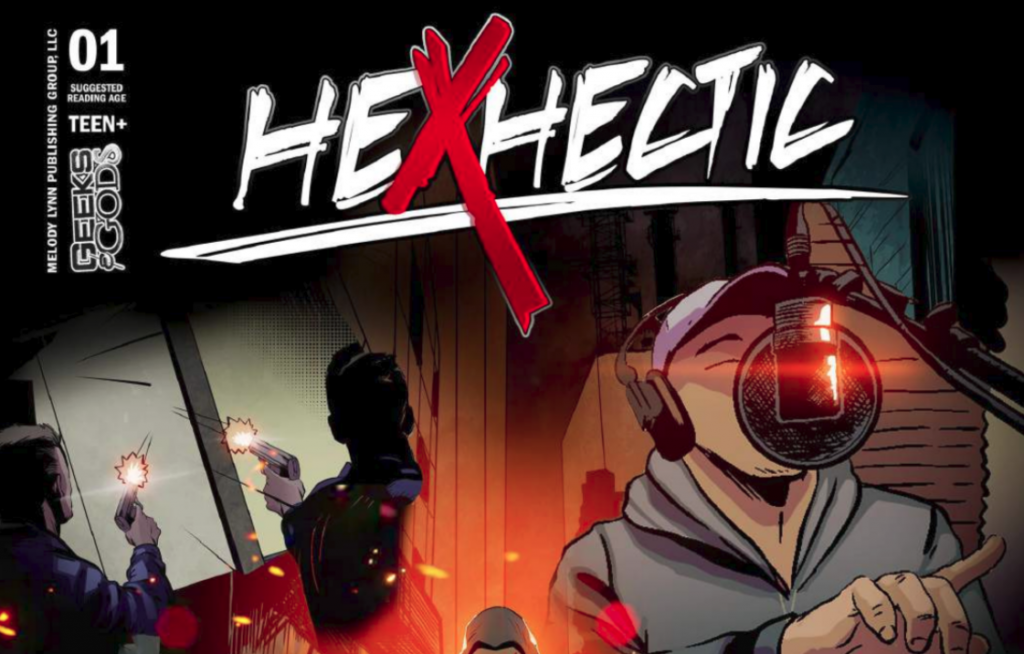 When you think about a comic book they typically focus around the people in the story. They help fictional characters in a fictional world. But Hex Hectic is doing something differently by connecting with its own audience. Or at least the audience it is trying for.

“Set in Second City, Hex is a popular music artist who begins to take vigilante actions against crooked officials and authorities in his hometown. This decision endangers everything he’s worked to obtain, becoming a symbol, and a target. In the introductory storyline, Hex is tasked with breaking into a public archives facility to access & recover information that could be pivotal for some members of the community.”

The first issue of the comic is vague. You know that there is a musician/vigilante that gets a car sent to him for a job. He complains about the car that gets sent, the car brings back a memory. In the flash back he’s quickly put in his place by the driver of the vehicle. “Nobody cares about you”, he says from the front seat. Making you start to feel bad for the guy he picked up and wonder what the flash back means for his story.

He then goes on to steal something. But we don’t know what until we open up the QR code. The code links to an actual document that you can use to expunge your criminal record. Which is what we were talking about when we said that Hex Hectic is really helping people.

Documents and processes like that are not commonly known. Unless you have an amazing legal team you don’t really know that you can get your record expunged. And for minors who commit petty crimes in their youth it is something that can make or break their future. When the author was asked about why he included the document in the comic by Marti Parham in an exclusive Q&A he said this:

People actually have these problems where I come from. I’ve been to the public aid office. I’ve seen and heard people’s frustrations. I was in line at 18 trying to figure out how to get vouchers for baby formula.” -Hector Danniel

Hex Hectic also contains music which you can hear by scanning the spotify code. If you listen to the music while reading it really sets the tone for the comic. I recommend reading the first issue which you can do by following the link below.

People don’t usually realize how limiting it is to have a record. Especially one that follows you from your teens. It can set you up for failure and land you in jail if you make another mistake and already have a record. So that’s why this comic teaching people how to access documents and procedures like getting your record expunged is so important. It appeals to all walks of life everywhere. No matter where you are from and no matter who you are you should definitely check out this comic. It could save someones life!

Hex Hectic was created and written by Hector Daniel, Illustrated by Mariano Fadrilan Jr., Color by Julius Stiawan, Design by Cova Creative, Distributed by Geeks and Gods and Published by Melody Lynn Publishing.