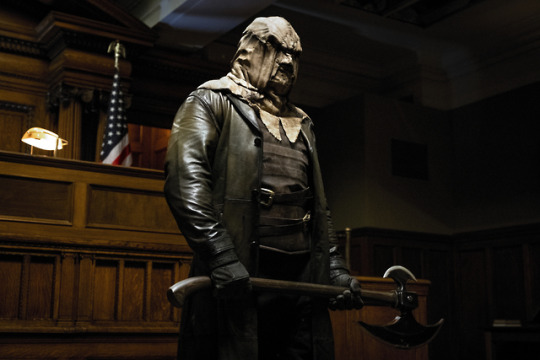 The Executioner Strikes On This Weeks Batwoman

Kate Kane takes on a new murderous villain on this week’s episode of Batwoman – ” I’ll Be Judge, I’ll Be Jury “. Meanwhile, her first love discovers her identity and Alice Reaffirms her loyalty to her partner Mouse.

So this episode was a lot like the Magpie one – Kate Batwomans around Gotham while fighting a “sympathetic” villain, Alice makes some moves in the background and nothing really dramatic happens.

While there was more focus on Luke Fox, which was appreciated, It was still framed as Kates story so he really wasn’t as emotionally involved as he could of been. Her basically blaming her father is representative of how she still blames herself, and she doesn’t seem to be getting over it any time soon.

If there’s a really interesting detail to the episode it’s Alice’s admittal to protecting her sister. Alice gets better every time she takes center stage, and although she takes a backseat she still had some interesting moments.

The action needs to be more interesting, especially since we’ve seen hints of interesting action choreography before. But the fights against the Executioner was boring and one sided. While it was visually enjoyable to see Batwoman get thrown around like she was in a wrestling match, The fact that she was saved by the crows is a huge cop out. It was almost like they didn’t know how to end the fight so they just wrote in that her father and his forces arrive.

If this is what you would say to be the Average episode of Batwoman, than its a solid episode that leaves you wanting for more. More action, plot and emotion that the show promises to have but will leave you hanging.

Weeds Making a Return to Starz