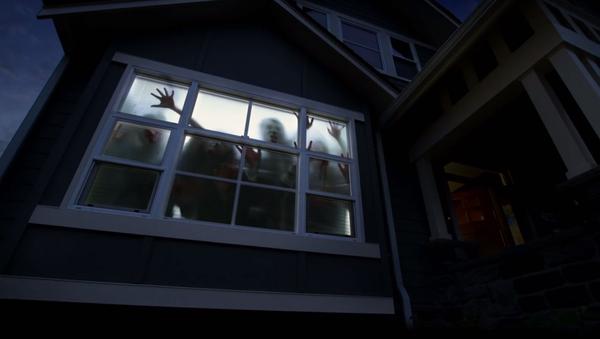 So, you want to bring your Halloween decorating to the next level. Something to really wow your friends and neighbors.  What are you gonna do?  Why projection effects!  These can be used not only in windows, but on walls, objects (for a 3D figure effect) or sheer fabric for a “hollusion” effect. So maybe you got a starter kit from Walmart or Home Depot and want to expand your projection options, or maybe you got an inexpensive used projector off of eBay.  Where can you go to get some more videos for your display?  Well I’m gonna give you a couple of sites that have digital downloads available for the fast-approaching holiday.  Since tastes differ (do you want spooky or funny, gory or family-friendly?) these aren’t ranked but just chosen to give a variety of options available.

A large selection of songs for the Singing Pumpkin effect.  What is that you ask?  It is when you project the animated facial features onto blank pumpkins (either real or those carvable craft pumpkins) so that it looks like the pumpkins are singing!  A reference would be the singing busts in Disney’s Haunted Mansion graveyard scene.  I haven’t done this effect on pumpkins, instead, I have used the full pumpkin image projection.  Word of warning here – there are a number of song animations available but the actual tune needs to be bought separate from the projection effect for this site. (Christmas effects also available)

In this case I have the older DVD version instead of the digital download. Many (though not all) of the vids are actors in costume or live animals.  Often the spirits have a sort of glowy black light effect.  For me, I have to confess that with my cheaper projectors and questionable focusing skills this means my ghosts tend to be kind of blurry, which isn’t necessarily a bad thing just not quite the effect I was going for. This is also the location for the “ghost descending a staircase” effect. There are also some excellent snake/rat/tarantula videos for projecting on floor or table – very lifelike effect even with a cheaper projector.  Also available are haunted portraits, singing pumpkins (sound included I believe), ghosts, skeletons, and even some aliens. Magic effects for the Harry Potter enthusiasts. These are a bit pricier than some of the other sites but often the download comes with a number of different scenes.

Hallowindow has a more cartoony than realistic effect to their projections but they can still be fun (and definitely family-friendly for the younger trick-or-treater). “Skull Bounce” with, well, bouncing skulls is a personal favorite, as is the zombie march.  There is also a haunted fish tank effect that is unusual. Other standard type vids are the spooky eyes and dropping spiders.  You can also get window montages that cycle through different images.

A nice assortment of effects.  Cool Frankenstein-type laboratory clip in black and white.  Some clown clips for those who are into those.  And, of course, the “green ghost” who looks very much like Slimer from Ghostbusters. A really fun little clip of the floating spud trying to avoid some proton beams. Other options are a scarecrow, floating eyeball, skulls& flames, ghosts, skeletons and others.

Spectral Illusions has some unusual ghost effects such as “Spirit of the West” (cowboy ghost) and “Ghostly Hearse”.  There are also a few skeletons, including “Forsaken Prisoner” (skeleton behind bars). They have some vids that can be used for pirate scenes: “Accursed Helmsman” which has a skeleton captain steering his ship during a storm, a skeleton captain and another pirate skeleton firing a cannon, and “Jump the Shark” which is a vid of zombie sharks!  Spectral Illusions “Haunted Tombstone” vid seems to have preceded the current trend of effects projected onto tombstones to enhance your graveyard.  Very nice little video with a variety of scenes.  Also available are an evil carnival background, a haunt rules video, zombies, and a haunted portrait.

I must confess that AtmosFX is my favorite and my go-to place for holiday videos.  For Halloween they have ghosts, skeletons, zombies, witches, spooky shadows, scary eyes, singing pumpkins, creepy crawlies, and what I think are the best haunted portrait videos. Their “Unliving Portraits” give you the option of one spooky picture or a trio of portraits that can interact with each other. A great effect whichever option you choose. Their videos are crisp and vibrant and range from humorous and family-friendly to scary and in some cases a bit gory (“Blood Walls” can let you transform your room into a literal blood bath!). A number of the effects have different options – TV mode, a background-free effect that can be used on a 3D form or for a hollusion effect, spotlight or flickering flame as well as standard lighting, etc. New Halloween effects for 2019 included Halloween Moon, some scary clowns, and some more ghost projections.

They also have videos available for other holidays: Christmas, New Years, Valentine and St Patrick’s days, Easter, and Thanksgiving.  There are even some football videos for your next game night party as well as some awesome dinosaur videos. Their site also has gear available (projectors, hollusion or window projection materials, media players) so it could be your one-stop shopping place, although if you are willing to hunt around you can probably get something at a lower price (dollar store shower curtains work well for window projections and fabric stores often have less expensive chiffon that can be used for hollusions). However, AtmosFX is the only place I know of that you can get the adorable Gourdy plushie!  Gourdy is the AtmosFX mascot and has his own blog posts on their site.

So if you don’t already have a projector for Halloween, keep an eye out for those post-season sales (just be sure to get the ones that allow you to add additional content) and then start collecting your own library of awesome videos for next year!