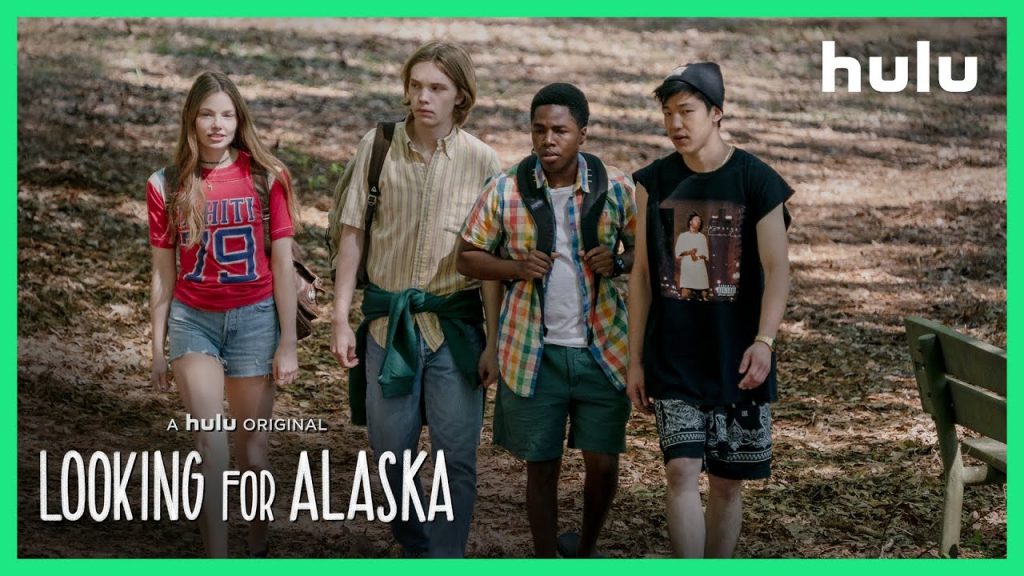 Author John Green’s best-selling novel, Looking for Alaska, was finally adapted into an 8-episode limited T.V. series, and is being released on Hulu this Friday!  All eight of the episodes will be available to watch.

Looking for Alaska was published over a decade ago in 2005, and is John Green’s first novel.  In 2006, it won the Michael L. Printz Award from the American Library Association.

This YA, best-selling novel tells of a simplistic, yet complex story.  It is told through the eyes of Miles “Pudge” Halter, who looks for a fresh start at a new boarding school.  Shortly after, he meets Alaska Young and falls in love with her. He also gains a group of loyal friends. However, when the unexpected happens, he and his friends must work to understand the mystery that is Alaska.  Throughout the novel, readers delve into a new perspective of a teenager’s complicated life.

The series had developed the cast in March 2019 and figured out who their main actors are.  Playing the lead role of Miles “Pudge” Halter is Charlie Plummer, and taking on the role of charismatic Alaska Young is Kristine Froseth (seen above).

Love plays the part of The Colonel, who’s real name is Chip Martin.  He is characterized as short, muscular, and smart. The Colonel attends boarding school on a scholarship, and must obey his loving mother’s order to attain a good education.  He is at war with the spoiled lacrosse athletes of the school (“The Weekday Warriors”), and is the mastermind of many pranks. He spends most of his time with Miles, Alaska, and Takumi (Lee).  Despite his goofy personality, he is an extremely loyal person when it comes to the people he cares about.

Lee portrays the character Takumi, who is a part of The Colonel’s group of outcasts.  He goes in between two groups of friends, but when it comes to The Colonel and Alaska, he’s always got their backs.

Bender plays Sara, who is The Colonel’s girlfriend.  However, their relationship is not one of cuddles and doting.  Rather, it consists of bickering and fights every time the two meet.

Vassilieva plays the part of Lara, who develops a crush on Miles.  She is from Romania and characterized by her shy and sweet personality.

Shelton portrays the part of Longwell, the main Weekday Warrior.  He despises The Colonel and his friends and works to make their lives miserable.

Connor plays Kevin, one of the Weekday Warriors.  He is a follower of Longwell and is not known for his intelligence.

Looking for Alaska was “created for television by Josh Schwartz, [and] the series comes from Paramount Television and Schwartz and Stephanie Savage’s Fake Empire” (Hulu).  Schwartz and Savage will be executive producers together, along with producers Jessica Tuchinsky, Mark Waters, John Green, and Marty Bowen and Isaac Klausner of Temple Hill.

When I first read Looking for Alaska, it quickly became one of my favorite books.  The enticing characters and complex plot made for a great read. I love how John Green took a down-to-life approach when describing the characters’ thoughts and made it really easy to relate to as a teenager.  The characters in the book are all going through challenges, but managing to live life to the fullest, which I believe can help to inspire others to go out there and live their best life.

Have you read the book?  What did you think of it?  Are you excited for the new T.V. series?  Let us know in the comments!