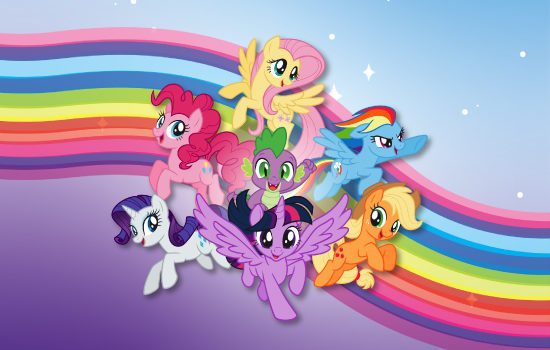 Magic: The Gathering Is Releasing My Little Pony Crossover Cards

Magic: The Gathering has done promotional sets before, so no this is not a joke. The popular card game is releasing a new one specifically to send all net proceeds to the Extra Life charity for the benefit of Seattle Children’s Hospital. Wizards of the Coast, who make the game, are based in the Seattle area so this is their preferred charity event. What is interesting is that the latest promotional set is a series of My Little Pony crossover cards, and it’s called Ponies: The Galloping. But it does make sense for a children’s hospital fundraiser.

This is really happening and is not some sort of trick (despite it being trick or treat season). Wizards of the Coast is going to sell My Little Pony crossover cards, sleeves, and playmats on HasbroPulse.com beginning October 22nd. The card sleeves are digital, and are for Magic: The Gathering Arena, but the rest of the goods are physical, though they’re not exactly tournament legal.

According to IGN, Magic: The Gathering Card Designer Chris Mooney said that the company “wanted to create a special product for our Extra Life initiative this year. It seemed like a perfect fit and the perfect time for it,” considering that the long-running My Little Pony: Friendship is Magic television show’s final season is set for this October as well.

The three cards feature Rarity, Nightmare Moon (with Princess Luna on the opposite side) and Princess Twilight Sparkle. They all feature art that’s a mix of the two properties’ styles from Andrea Radek, Jennifer L. Meyer, and John Thacker. The cards will be sold exclusively as a box set for $50 through HasbroPulse.com from October 22nd through November 4th, and a three-playmat set will go for $100 during the same period as well as Magic: The Gathering Arena digital sleeves for $3.99 a pop. You can check out all the images of this over at IGN.

My Little Pony fans can add to their collection even if they do not play Magic: The Gathering. Card players can also add to their expansive decks even though these won’t be tournament legal. Either way, the money will be going to an excellent cause and what a perfect way to do it. With My Little Pony unfortunately reaching its final season the same month that this set releases.

Are you as excited as we are for this special set of My Little Pony cards? Let us know in the comments.