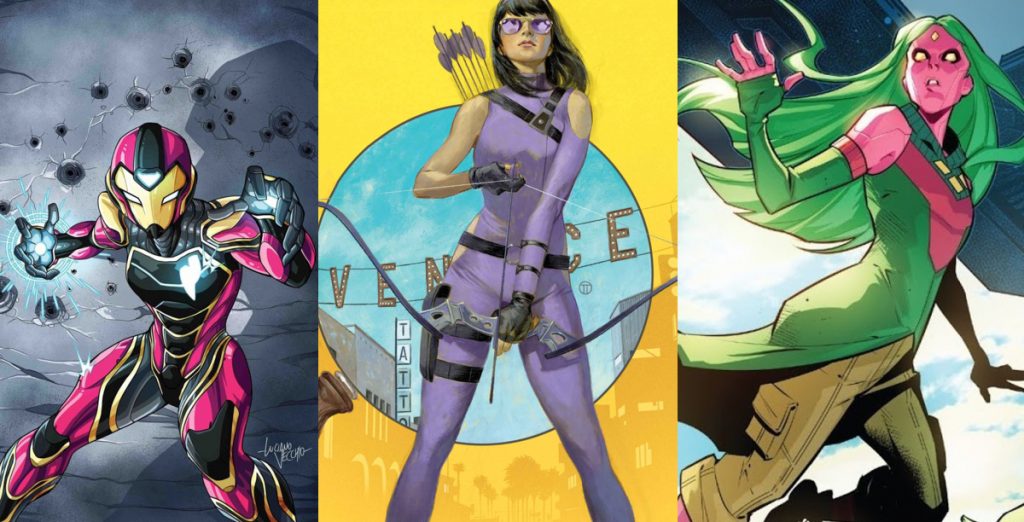 A Young Avengers Movie Is In The Works

Sources close to Nerdbot tell us that there has been discussion over at Marvel Studios about a Young Avengers film. While it is far off and nothing is set in stone for the movie the fact that it is being thrown about as an idea is very exciting.

Ironheart is friends with a few other superheroes that would make a great team up movie. For example Kamala Khan, a shape shifting Pakastani American who can shape shift and has become the newest Ms. Marvel. Or how about Kate Bishop who is known as Hawkeye and is the former leader and financial benefactor to the Young Avengers?

It would make sense that they would want to introduce younger characters to the MCU. Robert Downey Jr. has said that he would love to see Ironheart in the MCU and we all know about X23 being Wolverine’s daughter. While X23 is not canonically in the Young Avengers group they could also incorporate Avengers Academy where she has attended. There are multiple girls that could play these roles coming up and it would be a great opportunity to showcase some up and coming new stars while also getting a younger audience into the MCU.

But it wouldn’t just be girls kicking but. There would also be Amadeus Cho who is the new version of Hulk. We have already seen Amadeus’ mother in the MCU Helen Cho who created a new body for Ultron. Other characters could include Honey Badger(a clone of X-23 and youngest of the sister clones), Moon Girl, Snowguard(A young activist that joined the Champions), and Viv who would be linked to Vision. Viv is Vision’s synthesized daughter.

Ideally the whole thing with Fox and Spider-Man will be over by then and they can use Miles Morales as well. Though I’m not sure of the specifics of the litigation or what the contract actually covers. Perhaps if they only refer to him as Miles Morales it would be OK to use him in that capacity. It would be a shame if they could only have him on board in civilian form though.

If someone weren’t already into the MCU they could easily latch on to the characters since they have no previous presence in the films. Like Teen Titans was a latching on point for many people it would make Young Avengers a good place to connect with younger audiences. Knowing about one characters history allows you to make connections with others as they interact with them. Young Avengers might be the entrance to the MCU that a lot of little girls and boys would get into.

All the pieces seem to be fitting into place and if we know Disney at all they love to have characters grow into roles. Or at least be available to film multiple movies for franchise. Plus they can incorporate the adult heroes into this for cameos or guidance or whatever they needed to use as a plot device.

More info to come as we hear more. Stay tuned!