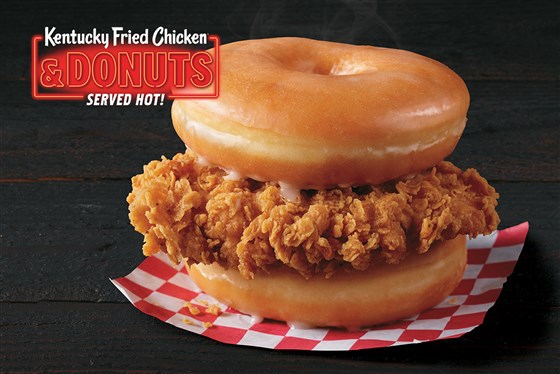 Things are heating up again in the world of fast-food chicken. Popeye’s started the sandwich war with its introduction of a new chicken sandwich. Customers stood in long lines for a taste of the new offering, and Twitter soon had fans taunting self-proclaimed chicken sandwich inventor Chick-fil-A, but all too soon it was over—Popeye’s was sold out.

But the lull in the chicken sandwich war may soon be over as KFC is looking to introduce a new sandwich–the fried chicken & donut sandwich! I suppose with the introduction of fried chicken and waffles to some restaurants’ menus that chicken and donuts was maybe the next step? The sandwich consists of the traditional fried chicken with its secret recipe placed between two glazed donut buns. Cost of the sandwich around $6. For the less adventurous among us, you will also be able to get a basket of chicken with a side donut instead of the usual coleslaw or mashed potatoes. Cost of the basket meal will be $5.50. Or you can just add a hot donut to any meal for $1.

I suppose this is the “breakfast sandwich” alternative to the Cheetos chicken sandwich they tried out recently? Maybe next we will start getting some of those deep-fried Oreos as a dessert option instead of the cake. Or maybe just top off your chicken & donut sandwich with a deep-fried Oreo. Or wrap it in bacon.

In their press release KFC states, “As part of its food innovation strategy, KFC is always looking for ways to serve its customers with new delicious and innovative choices. The Chicken & Donuts trend has been gaining popularity, but mostly on a local level in areas like Philadelphia, San Diego, and Portland.”

I don’t recall seeing this, but maybe that is because I am just in the suburbs of Philly. Besides, cheesesteaks and Tasty cakes would be more my thing (though not in the same sandwich!)

Social media was quick to question the health effects of the tasty combo, seeing it as a complete 180 from the recent Vegan Fried Chicken. Nutritional information is not yet available as the donut sandwich is not a regular menu item. However, you probably don’t need to see the numbers to guess that the sandwich is bad for you, you just won’t know how bad.

The new sandwich is being tested in Norfolk and Richmond, Virginia and the Pittsburgh area so if you want a taste and you live elsewhere you may have to take a road trip or wait. Or maybe hit up Dunkin’ Donuts before you go through the KFC drive-thru and make your own!