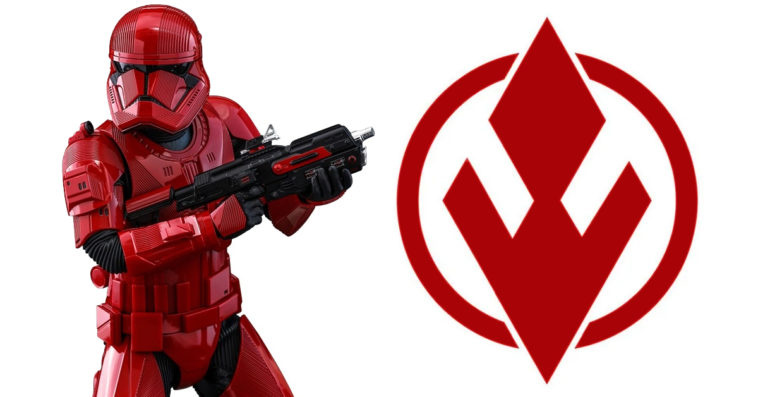 The Star Wars official canon is giving the symbol for the dark order of The Sith a whole new look. This new symbol will be debuting in the upcoming movie Star Wars: The Rise of Skywalker. Which means we will be seeing it in a few months from now.

Take a look at the brand new Star Wars symbol for The Sith, below (via Star Wars.com):

This promotional image for Star Wars: The Rise of Skywalker shows off the new “Sith Troopers”. As well as the new Sith Symbol.
As Screen Rant points out, it actually first appeared in the summer 2019 release, Star Wars: Who’s Who in the Galaxy: Character Storybook, as part of the entry on Darth Vader. The appearance ignites a lot of speculation and theory. But when it was released as the new symbol for The Rise of Skywalker, a lot of those speculations can be put to rest and/or confirmed.

This new symbol for the Sith could have several meanings. However, the Star Wars Sequel Trilogy has been supposedly building off the idea of “The Ones” (aka “The Father,” “The Son,” and “The Daughter”). Which was first introduced in the Clone Wars animated series. Themes of three, as noted by the three prongs, helps justify this theory.
Whatever the symbol may mean, it isn’t as though this is the first time the Sith have adopted a new symbol although we maybe most familiar with the one associated with Darth Vader’s time. The symbol has often changed as the dark religion has changed.

What do you think of the new Star Wars symbol? Does it mean anything new? Or is it just a new look to revamp an old order?