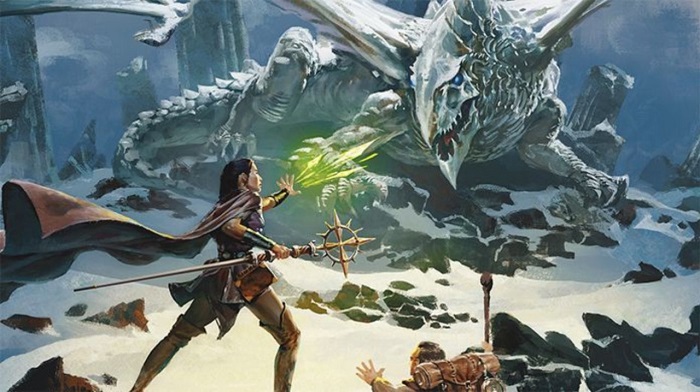 Originally an exclusive run at Target, where it eventually sold out, the Dungeons & Dragons Essentials Kit is now getting a wide release. Starting on Sept. 3, you can pick it up at Amazon, Barnes & Noble, or your local game store.

Back in July, Wizards of the Coast released the Essentials Kit as a way for new players to learn the ins and outs of the most popular tabletop role-playing game. The box set includes everything a new D&D group needs to start its first campaign: an introductory rulebook, DM screen, a set of 11 dice, a handy set of cards for things players need to keep track of (initiative, magic items, etc.), and a brand-new adventure called Dragon of Icespire Peak.

What really stands out in the Essentials Kit is the new ruleset for one-on-one campaigning. Now all you need is a DM and a player to start adventuring. It eliminates one of the most common barriers to getting into D&D: which is getting an entire party together regularly. Which we all know is the most impossible task one can undertake in the tabletop gaming lifestyle.

The Dungeons & Dragons Essentials Kit is on sale now at Amazon, Barnes & Noble, local game stores, and is back in stock at Target. The MSRP is set at $24.99, but both Amazon and Barnes & Noble are currently selling it for $17.49.

Mary Anne Butler May 26, 2022
We are so very sorry to report the passing of actor Ray Liotta. Reports indicate the "Goodfellas" star passed in…
Nerd Culture