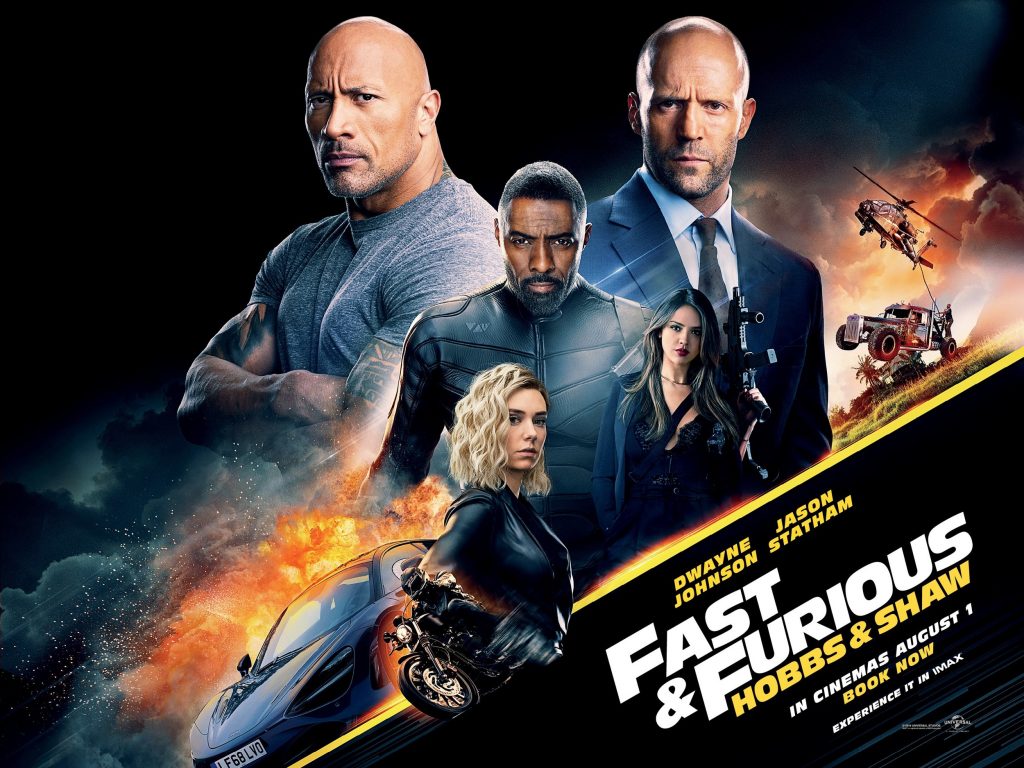 With the Fast & the Furious franchise releasing a spin-off there have been mixed reviews. Honestly, I’ve only seen the first, Tokyo Drift, and Fate of the Furious. Thanks to Google I went into the screening with an open mind and excitement for this movie review.

Since hulking lawman Hobbs (Dwayne Johnson), a loyal agent of America’s Diplomatic Security Service, and lawless outcast Shaw (Jason Statham), a former British military elite operative, first faced off in 2015’s Furious 7, the duo have swapped smack talk and body blows as they’ve tried to take each other down. But when cyber-genetically enhanced anarchist Brixton (Idris Elba) gains control of an insidious bio-threat that could alter humanity forever — and bests a brilliant and fearless rogue MI6 agent (The Crown’s Vanessa Kirby), who just happens to be Shaw’s sister — these two sworn enemies will have to partner up to bring down the only guy who might be [worse] than themselves.

Directed by David Leitch (Deadpool 2, Atomic Blonde) who has a long list of Stunt credits, you will not be disappointed with the stunts delivered. Screenplay by Drew Pearce (Iron Man 3, Hotel Artemis) and Chris Morgan (47 Ronin, Vatican Tapes, and other F&F films). Written by Gary Scott who is the creator of the characters from the F&F.

As someone who likes action and comedy I enjoyed this movie; To sum up the film: action, montage, action, story build, action, funny jokes, action, and tear factor for tender hearts.

You want some character development or cameos? In previews, Hobbs (Johnson) goes back home in Samoa where his family use tradition to kick ass with the Shaws. You get to see what sort of relationship he has with his daughter. You review the damaged history of Shaw (Statham) as he sits with his mother. With that, Queenie Shaw (Mirren) and Sam Hobbs are back in this film with cameos. Idris Elba is an amazing actor and did a wonderful job with his character, Brixton.

You’ll get some laughs with the back-and-forth insults between Hobbs & Shaw and with Ryan Reynolds, Kevin Hart, and Rob Delaney. Awesome fight scenes with John Tui, Josh Mauga, Roman Reigns, Eiza Gonzalez, and Cliff Curtis. Shout out to Lori Pelenise Tuisano (Funsize) who plays Mama Hobbs (and GOD do I love her character). The movie will probably please the masses who enjoyed the franchise with hot cars, hot chicks, guns, and fight scenes. This film may disappoint some masses as there are no sexy, steamy scenes (sorry, boys).

Do You Need to Watch the other F&F Movies?

Don’t worry about watching the rest of the franchise before jumping into this one. The introduction of this film has a small sum up of who Hobbs and Shaw are. If you’re dedicated to the films; Hobbs is introduced in the 5th and Shaw appears in the 6th.

As of August 2, 2019, Hobbs & Shaw has grossed for a worldwide total of $48.6 million. With a budget of $200 million and $48.6 million opening night, Hobbs & Shaw shows promise as the first spin-off. Don’t forget! There are THREE scenes in and after the Credits so stay in your seats!

What did you think of Hobbs & Shaw? Did you notice some continuity errors in the film? Do you like this movie review? LEAVE A COMMENT BELOW!

This review is based on the opinions of one Nerdbot writer.