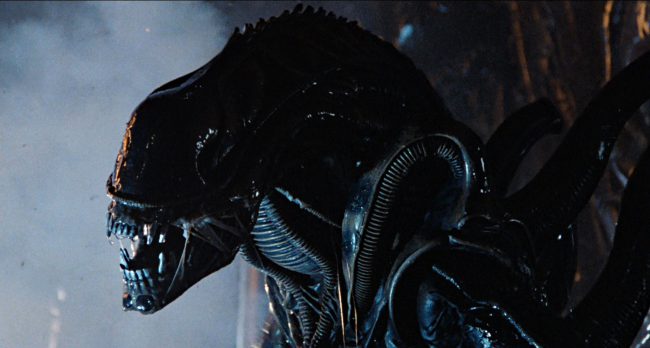 Ridley Scott’s Alien Coming Back To Theaters This Fall

So it’s been forty, yes that’s right, the big 4-0 years since Ridley Scott’s sci-fi horror classic Alien popped out of Hollywood’s chest and into a theater near you.

Yes, 1979. No, not the Smashing Pumpkins song. And what does the industry do when a staple of cinema celebrates an anniversary? Bring the Xenomorphs and FaceHuggers back to the theater for another run!

Scott’s landmark film launched the career of Sigourney Weaver, a franchise with many lesser installments, and cemented H. R. Giger as household name in the world of terrifying art.

Have you heard of Fathom Events? They’re the company that partners up with your local movie house to bring classic movies, concerts, and for some reason stage plays to the big screen. If you’ve gone to the theater lately, you have definitely seen a couple of their advertisements before the usual Cinemark twenty minutes of previews. Seriously Cinemark… twenty minutes? Don’t you know people now watch a majority of their previews online?

Anyway, if you’re interested in seeing Alien the way it was meant to be seen, wait a little over two months until the week of October 13th. Select theaters will be holding three showings over the course of seven days and you can find the nearest location, plus buy tickets by clicking here.

While I have never been to a “Fathom Event”, Alien might be the opportunity for me to finally experience this recent entertainment phenomenon.

I paid to see Covenant, still don’t know why.

Tickets are on sale now.

What are your thoughts on Fathom Events? Let Nerdbot know in the comments!!