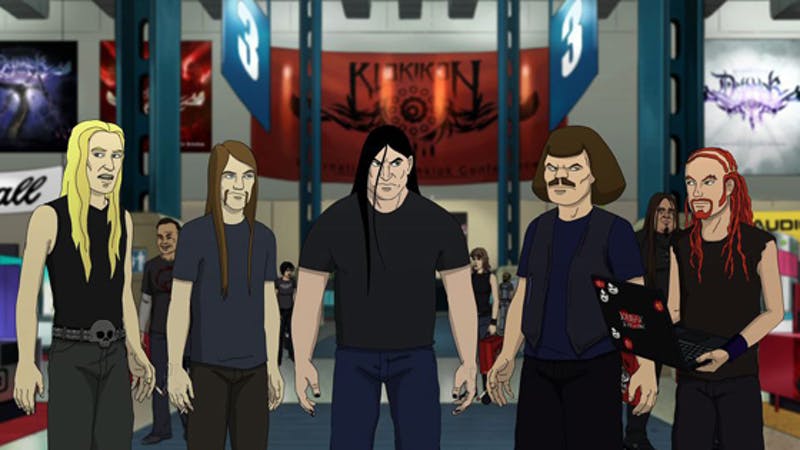 If you’re the Cartoon Network, it’s either the most on the nose thing ever to schedule a band that was the central focus of one of your shows, to headline your own music festival… or it’s a marketing genius!

Let’s hope for the latter as the lineup for the second installment of Cartoon Network’s Adult Swim Festival dropped today and right at the top of the bill are the Deathklok. You might remember them as the stars of Metalocalypse, a classic animated series about an ungodly successful death metal band. Yes, after recovering from what I’m assuming is the biggest hangover ever, the group will take the stage again.

Just so you don’t think it’s a bunch of holograms rocking out on stage, Deathklock is actually a real band, Brendan Small and Tommy Blacha being the geniuses behind the music. They have released three albums, toured with Mastodon, and now are following in the footsteps of just about band by reuniting to play a major festival.

I know what you’re thinking… is the Adult Swim Festival a “major festival?” Well in 2019, the Cartoon Network is stepping their game up big time. This time around the fun will take place at Banc Of California Stadium. An upgrade when compared to the grounds of Row DTLA, not just in size but also a much nicer and accessible venue for a festival bringing this type of talent to the house LAFC built.

Make sure to get there early for No Joy. Out of nowhere, they released two phenomenal albums back to back. You’ll thank me later. Also, this will be Captain Murphy’s first show in five years.

The festival will also feature the Eric Andre Show Live, stand up comedy, and an exclusive glimpse of Rick And Morty Season Four.

The Adult Swim Festival takes place between November 15th and 16th. You can click here.

Who are you most excited to see at this year’s festivities? Let Nerdbot know in the comments!!