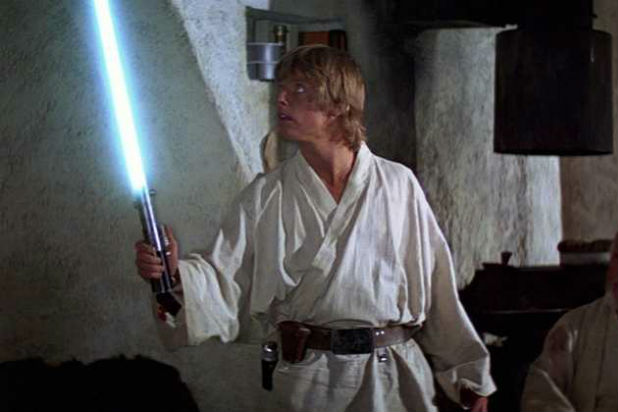 Spotted Prop Mishap in ‘Empire Strikes Back’ on Luke’s Lightsaber

Producer for the film Pablo Hildalgo has spotted an error with a prop in The Empire Strikes Back. After premiering 39 years ago there are still new things to be discovered, and he’s found that the words “New York” appear on Luke’s Lightsaber, only apparently no one noticed it for years. If you take a look at the tweet he put out you can see the side by side of the prop in a clean image vs. the film. In the film it is pretty blurry but since he produced it he knows what to look for. He was after all on set with all of the props being used at the time.

This comes into the spotlight after a couple of Game of Thrones mishaps were brought into discussion. In one scene from season 8 fans of the show were quick to point out that there was what looked like a Starbucks cup. In another there was a bottle of water. Many attributed that to the production team being lazy or not noticing with the last season feeling so rushed. The fact is though when you are working on anything sometimes things just slip through the cracks. And unfortunately sometimes those things are a pretty big deal.

As for the words New York on the Lightsaber, I don’t believe knowing that is going to take away any of the magic in the Star Wars films. Not when there are other things to argue about. Like for instance the added scenes that George Lucas put in after the films were completed. Han shot first was one of the biggest issues as well as the odd looking CGI in the DVD and VHS rereleases for films 4,5, and 6.

But no matter where you stand on it, Pablo Hildalgo is right. No matter how many times you watch something you will always find something new. Especially in the Star Wars universe where they put in so many Easter eggs.

What do you think of spotting this 39 year old prop “fail”? Tell us in the comments!