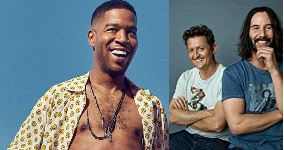 Casting continues on the upcoming Bill&Ted 3 aka Bill and Ted Face the Music. Alex Winter (Bill S. Preston Esq) and Keanu Reeves (Ted “Theodore” Logan) are reprising their roles as the title characters and Samara Weaving (Thea Preston) and Brigette Lundy-Paine (Billie Logan) have been cast as their daughters. William Sadler is returning as Death.

Now Scott Mescudi aka Kid Cudi is joining the cast. Although his character is not yet known, a press release claimed that he “has a significant role.” Perhaps he will be helping Bill and Ted in their quest to create a song to save the Earth and bring harmony to the universe? The rapper-singer-songwriter has also acted in movies and television so he brings a lot to the film. From a Twitter exchange between Alex Winter and Kid Cudi, it would seem that his appearance in the film was discussed a while ago.