As a Spider-Man nerd since I could read and a film geek for as long as I could remember, I love a good Spider-Man flick. I also enjoy making wild, unsubstantiated guesses about things I haven’t seen. Thus, I present my Spider-Man: Far From Home Theory Roundup. Some of these are my guesses. Some are certainly found elsewhere in the ether. But all of them have one commonality: They COULD be true. Maybe. Possibly.

MYSTERIO IS A BAD GUY

Shocker, I’m sure for all the Spider-Man fans out there but Mysterio will be a bad guy! 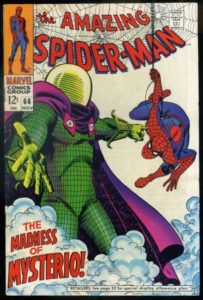 Quentin Beck is a special effects master who, being a completely loser despite his amazing skills, couldn’t get a job in Hollywood or Bollywood or really anywhere. So, crime! That’s sort of a pattern in the Spider-Man universe.

In his first outing against Spidey (Amazing Spider-Man 13), Mysterio frames Spider-Man and pretends to be a good guy sort of, all over a bank robbery. He also has a history of making fake aliens, fake X-Men, and other fake characters to trick or otherwise confuse the world into ignoring his real goals. I’m betting Mysterio is pretending to be a hero either to make a fortune or cover up an evil scheme. Maybe a little of both.

Here’s a reach but it could be a fantastic nod to history. 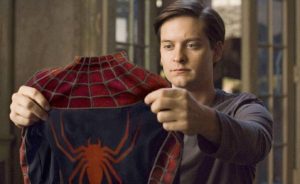 In Far From Home, Mysterio WILL BE from another universe. But not just any other universe. All of the current signs point to him being from Spider-Man UK’s Multiverse, Earth-833. But there are 2 signs this might be wrong. First, the Official Marvel Designation for the current movie universe isn’t 616 as stated in the trailer. 616 is the comic universe. 199999 is the official numbering of the movieverse as revealed in the Official Handbook of the Marvel Universe published by Marvel. So maybe 833 is a red herring and we will see a brief but fun cameo from the original movie Spidey…

Toby Maguire! I mean, there were rumors he’d be involved into Into the Spider-Verse, so that isn’t a stretch. Right?

NICK FURY IS THE CHAMELEON

The Chameleon is Spidey’s origin villain, right after Uncle Ben’s Killer and Lower Class Socioeconomic Pitfalls. He has been around since Amazing Spider-Man 1 back in March of ’63. 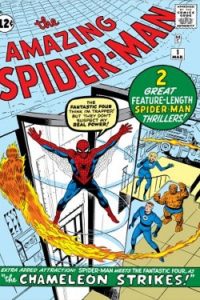 Like Mysterio, Chameleon wanted to frame Spidey and thus pretended to be Spider-Man and shenanigans happened. That’s his shtick. He’s a master of disguise and a Russian spy. The Nick Fury in the trailer is the Chameleon, though the REAL Nick Fury could very well be in the movie as a shocking reveal.

This theory is also bolstered by the fact that Dmitri aka the Chameleon is apparently in Far From Home. And the Nick Fury in the Trailers is wearing his old Avengers outfit. Just the kind of subtle mistake the Chameleon could make… Like in the Spider-Man cartoon when the Chameleon pretended to be Nick Fury but had the patch on the wrong side.

Mr. Harrington, one of Peter’s teachers, makes an appearance in Far From Home and in the comics was killed by the Chameleon. Hmmm… 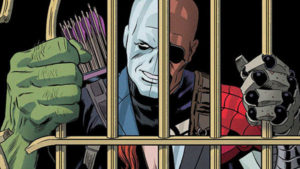 Remember how Tony was selling his old, damaged skyscraper? And then a new owner was mentioned? Well, us fans were REALLY hoping it was the Fantastic Four, but my gut says it’s Norman Osborn. 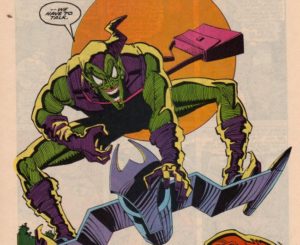 The Green Goblin aka Norman Osborn aka Iron Patriot aka President Osborn hasn’t been mentioned or hinted at yet in the MCU. This is big because Osborn is THE Spider-Man villain and a huge villain in the Marvel Universe. If he is around and Oscorp is buying old Stark Industries’ buildings, then maybe, just maybe Osborn is pulling a few strings.

THE SINISTER SIX AND THE THUNDERBOLTS

Some supposed leaks running around point to either the Sinister Six being the goal or the Dark Avengers. Both teams could easily be run by Norman Osborn, but I tend to lean toward them using the Thunderbolts AFTER the Sinister Six. 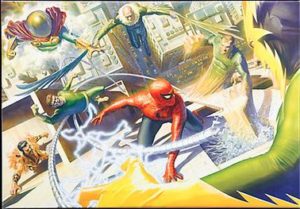 Norman Osborn will use the existing Spider-Man villains we’ve seen that are alive: Vulture, Shocker 2, Scorpion, Mysterio, Chameleon… maybe a couple of different ones we have yet to see. He will lead the Sinister Six in Spider-Man: Home on the Range (name of 3rd movie not official). After his defeat there – or during all of this? – he will also set up the Thunderbolts.

THE THUNDERBOLTS ARE THE BIG BADS IN PHASE 4

The Thunderbolts are a team of villains pretending to be heroes. Here are some of the names of villains pretending to be heroes that currently exist or are rumored to exist in the MCU moving forward and are alive: Iron Patriot (Normal Osborn who will steal some Stark tech?), Citizen V (Baron Zemo), Red Hulk (General Ross), Ghost, and Justin Hammer. Oh, and Bucky Barnes AND Hawkeye have also both been on the Thunderbolts at one point. 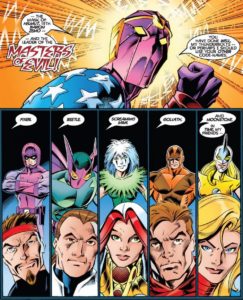 Having a team of baddies fighting the Avengers is a new concept, so why not use what they have and build on it, making the Thunderbolts the evil dudes of Avengers movies for a while?

THE MULTIVERSE IS A BIG DEAL

What happens because of The Snap won’t be touched on much, sadly, in Far From Home I surmise. What will be a big deal is the Multiverse hinted at in the trailer. Why? Money. Having a multiverse lets Disney and Sony make elevenkajillion movies from here on out, recasting every character to infinity by just making it a new universe. But after Spider-Man introduces the multiverse of the MCU here, I think the first real ramification will be…

It makes perfect sense for a Mr. Fantastic or one of the FF villains (Dr. Doom, Annihilus, Kang…) to be the one to break the multiverse and enter the MCU reality or bring the MCU reality characters to their own. It would be a great way to introduce a GOOD version of the Fantastic Four, the X-Men, and whoever else Marvel decides to throw at us in the next 400 years of Disney/Marvel movies.

IT WILL SET UP A SOLO BLACK WIDOW MOVIE

This is a cheap random guess, but Dmitri aka Chameleon is Russian. Black Widow is Russian. Why not tease a Black Widow solo movie that’s planned? It’ll certainly very likely be set before her time on the Avengers (I mean, she IS dead after all), so why not have Chameleon be the bridge between current MCU and a future movie? Taskmaster is rumored to the main villain but Dmitri could be hanging around, being a jerk. 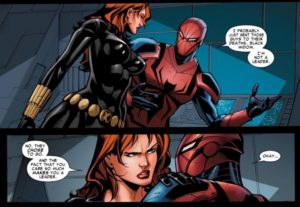 All of these theories are just that… fun fan theories floating around in the universe. Will they be true? Am I full of BS? You’ll find out July 2nd whether or not I am on the money or a big stupid wrong jerky jerk.

What do you think will happen in Spider-Man: Far From Home? Let Nerdbot know in the comments!