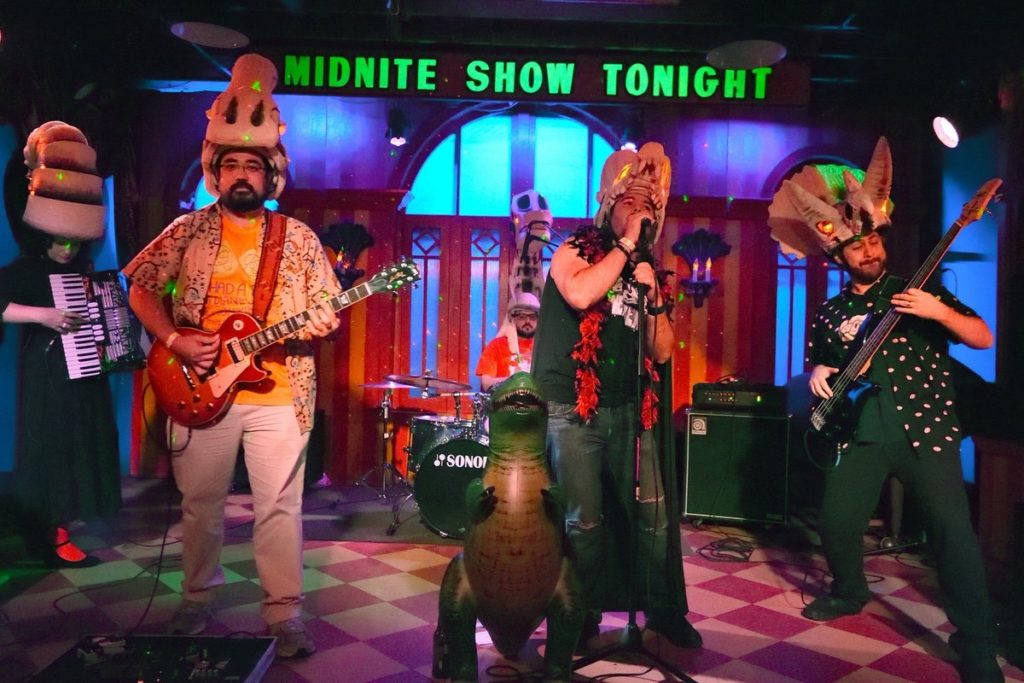 By Adam ChmielewskiMay 29, 20199 Mins Read
Share
Facebook Twitter Pinterest Reddit WhatsApp Email
Yes, there is a subgenre of music completely devoted to the prehistoric era.  I was surprised to learn about this because I consider myself to be somewhat musically inclined, at least when it comes to listening, and I’ve never even heard of such a category.
What is dinosaur rock you might ask? If I could easily describe the sound, it encompasses several sounds.  Rock, funk, ska, punk, I would set the spectrum with the Voodoo Glow Skulls on one end and S.C.I.E.N.C.E. days Incubus on the other, somewhere in between them, only coupled with lyrics inspired by the creatures that roamed planet Earth millions of years ago.  You may think I’m pullin your chain but I swear Dinosaur Rock exists, and it is BONEHENGE.
And fortunately enough for you the members of BONEHENGE, Southern California’s non-extinct musical Dinosaurs, sat down with us for interview.
Check it our below!
How did the idea of BONEHENGE come to fruition?
Ian Luckey (Bass Triceratops): CeCe and I had the idea for a prehistoric-themed band back in 2015 when we were living in San Diego. Our music projects over the years have always leaned more costumed/theatrical, and dinosaurs seemed like such a great concept that everybody could recognize and appreciate. Originally the music was more heavy and brutal; kind of going for that Metalocalypse style of satire…but I guess people weren’t picking up on the subtlety of the humor, and we had a hard time finding band members. It got shelved for a few years, but after we moved to Long Beach, getting a group of musicians together that were willing to be weird was so much easier in LA county. We started writing new songs with more of an Oingo Boingo vibe, putting a greater emphasis on fun and comedy, and it all just kind of came together.
Who came up with the name BONEHENGE? Also, is it a humorous take on Stonehenge, or is there another meaning behind the name?
Cece Luckey (Accordion Ammonite): As a group we came up with several different band name ideas and voted on them. In the end our top two choices were “BONEHENGE” and our drummer Bijan’s amazing idea “The Band Before Time 2.” It was a very close finish, but for the sake of simplicity—and also fitting our name on show flyers—we went with “BONEHENGE.” The original idea for that name started with a word Ian and I made up to refer to our dog’s habit of leaving cow-bone chews sitting upright on the floor for us to constantly trip over. 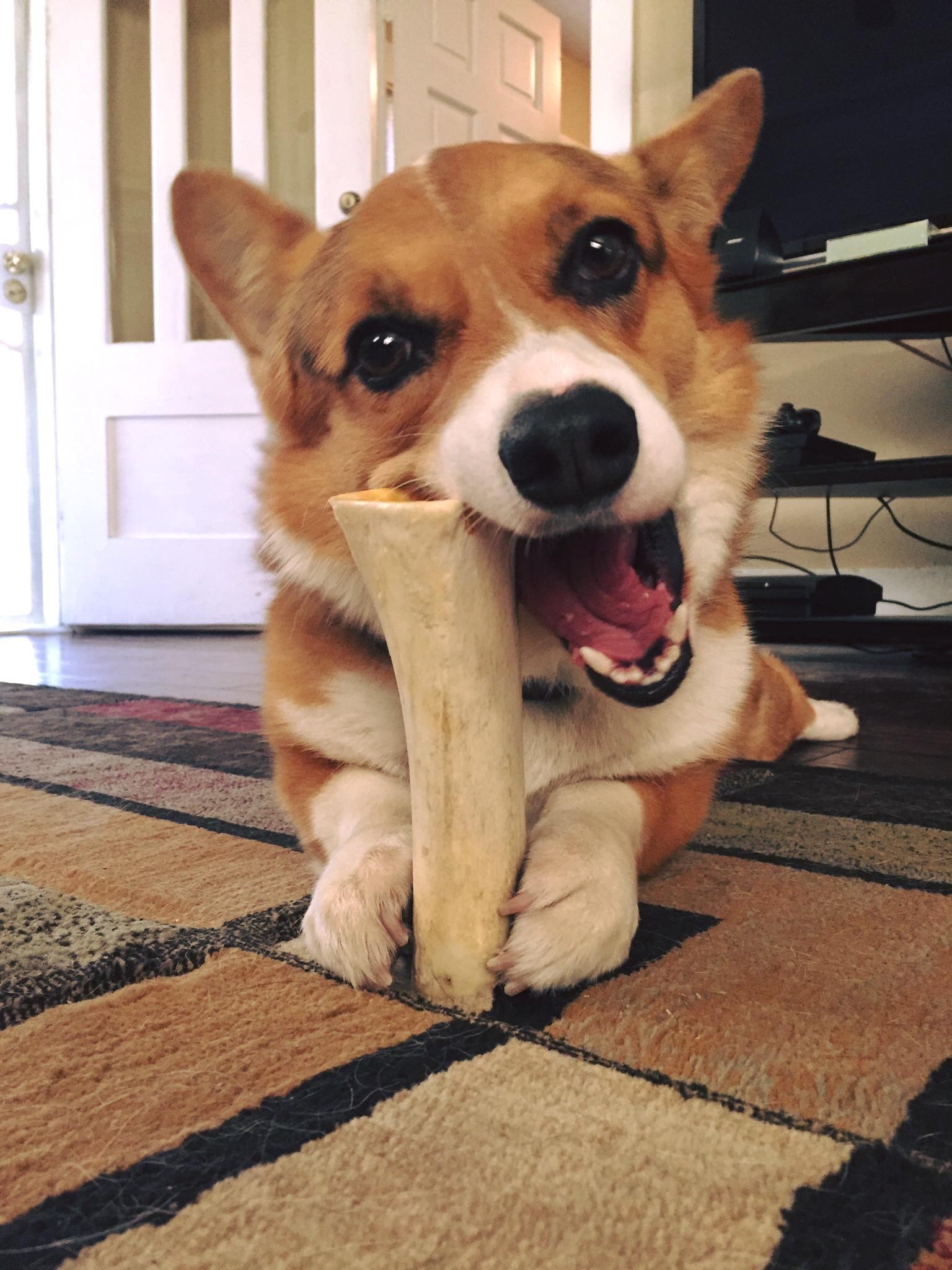 First I have to say that is one adorable corgi.  I would have totally named my band after something my dog too.  Even though “Band Before Time 2” is a pretty damn good name I think you made the right choice.
Now that you mention it, heavier music does seem like the perfect place to start a band with costumed/theatrical elements.  Groups like GWAR, Mushroomhead, and Slipknot really pioneered the concept.  Did you feel by changing to a lighter, more accessible style of music presented opportunities you wouldn’t normally get by being more of a metal band? And believe me, I’m a fan of heavier music but I feel hard rock bands don’t get the same type of treatment or opportunities as others bands do (Just my opinion, for another day).
Ian Luckey (Bass Triceratops): The versatility is definitely nice, but I think the primary drive behind the style change was the instrumentation. I was looking for a new outlet to play bass, CeCe was looking for a new outlet to play accordion…a lot of the band members are multi-instrumentalists, so during the formative period of the group it was more like “what are you most interested in playing”, and then we started building the music around that. The end product is sort of genrefluid, where we’ve got major style changes not only from song to song, but often within a single track too. The benefit is, since we don’t go with anything specific, we end up kind of going with everything. We’ve played with metal bands, ska bands, punk, prog, surf, folk, you name it. There’s usually common ground with at least one of our songs. 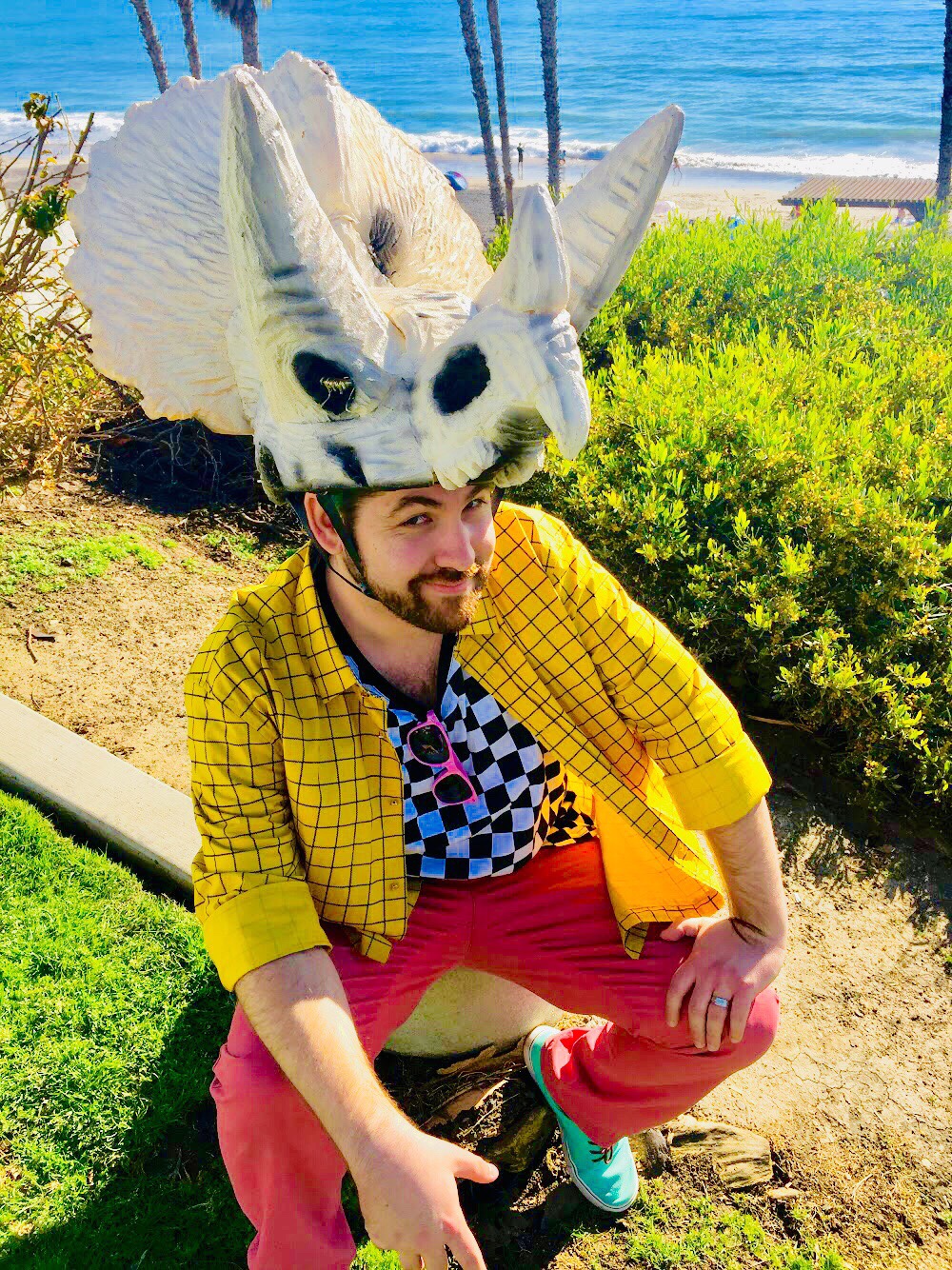 Since BONEHENGE has changed their sound to more of a ska/funk/slash straight forward rock, who were some of the bands that influenced this new direction?
Ian Martyn (Guitar Parasaurolophus): Well, since three of us have written songs so far, I think that we’re all taking influences from different places. As someone who has a lot of experience writing prog rock and metal songs that are mostly longer than 8 minutes, I really tried to find different influences in my writing for BONEHENGE. Overall, I’ve found that I’ve been particularly inspired by Stolen Babies in much of my writing; interestingly enough, Ian’s ad for BONEHENGE mentioned Stolen Babies in the potential influences, and that’s what initially piqued my interest. I found that, with songs like Mammal Uprising and a couple of upcoming songs that I’m finishing right now, I was particularly influenced by third wave ska bands, especially early No Doubt and Save Ferris. For my darker songs like Underwater Frenzy and Prison of Stone, I’m drawing on my high school love of early 1990s Visual Kei from Japan, particularly Tetsu-era Malice Mizer and early Luna Sea. I have a song that I’m finishing up that’s particularly Luna Sea influenced. 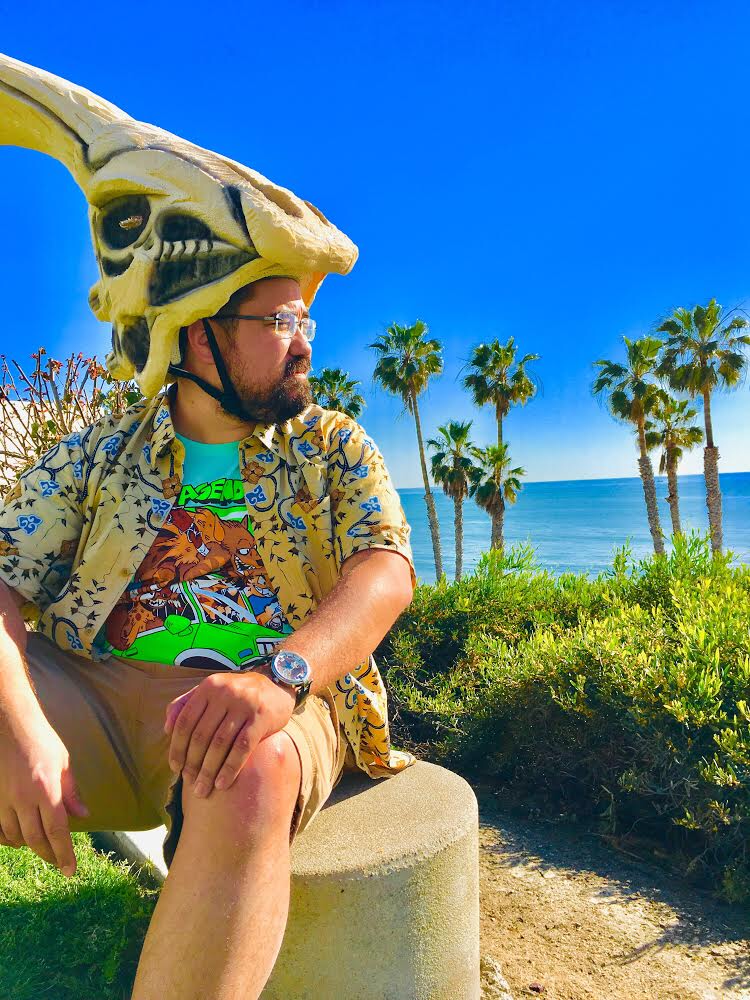 Also, I’ve noticed some killer bass lines and guitar . Are there any specific musical personalities who have influenced your style?
Ian Luckey (Bass Triceratops): T-Sex, Tar Pit, Dino War, Chicks Dig Paleontologists, Museum, and Wrath of the Sun…these were all my fault, hahaha. There’s a sort of dark quirkiness to a lot of my songs that I’m sure comes in no small part from growing up listening to Danny Elfman scores. A few other influences for this project that haven’t been mentioned yet; Grant Kirkhope, Tenpei Sato, The Aquabats, Tom Waits, and Gogol Bordello.
CeCe Luckey (Accordion Ammonite): I wrote Herbivore. I am definitely influenced by my deep love for 90’s grunge bands such as Alice In Chains and Soundgarden. The breakdown for Herbivore is somewhat classical sounding, though. I thought it was an interesting contrast to the dark mood of the rest of the song, considering the theme is one of confusion and general distress. 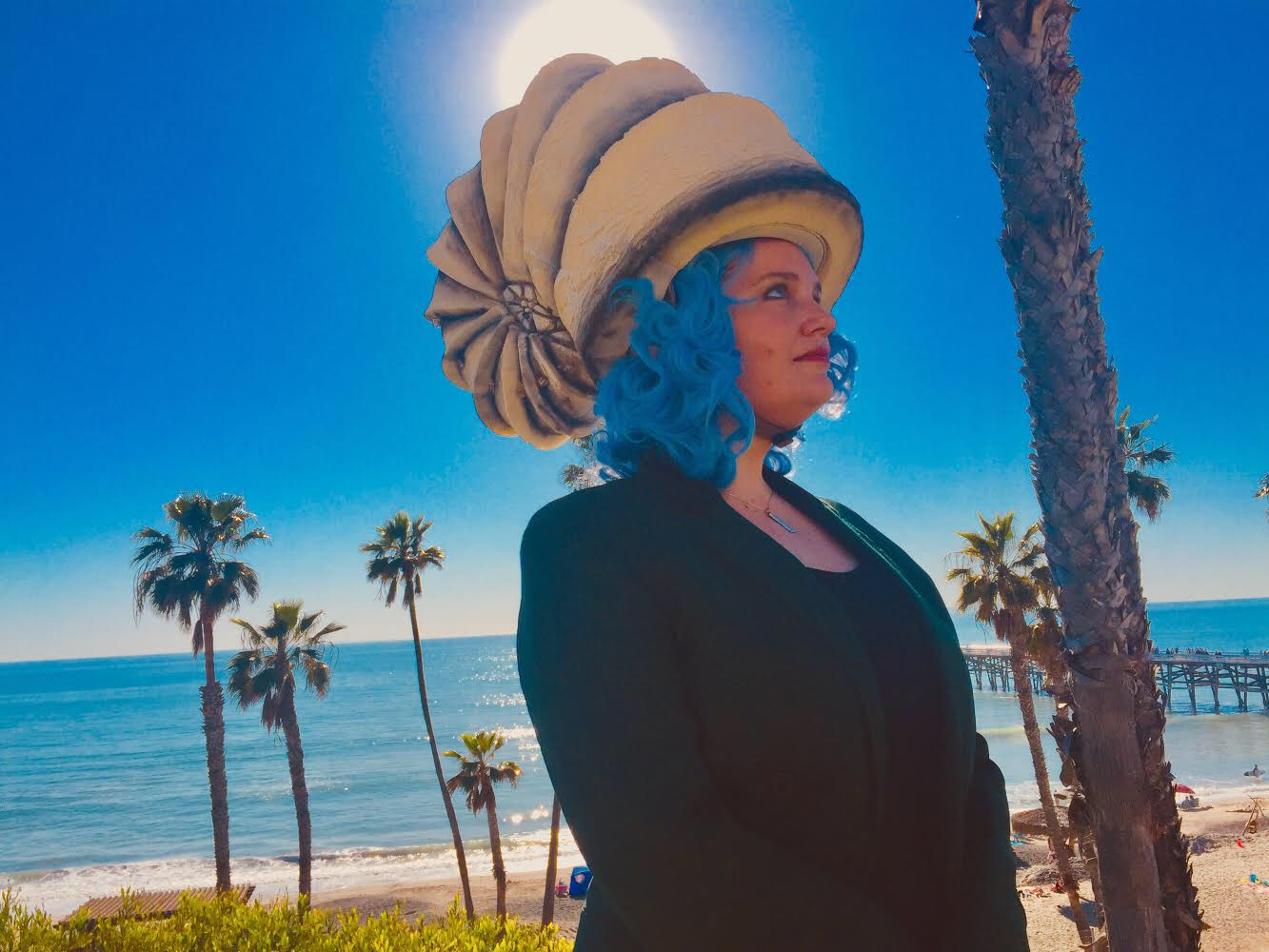 Ian Luckey (Bass Triceratops): Hirokazu Ando was my earliest influence, but video game soundtracks in general have always been the one constant in my development as a musician. The SNES and PS1 work of Nobuo Uematsu and Yasunori Mitsuda really solidified the importance and versatility of bass to me when I was younger. It isn’t my first instrument but it’s definitely become my favorite, so I’m drawn a lot to the funk/disco style of writing and love the sound of FM synths. Jake Kaufman is probably one of my favorite modern artists, but I could list excellent and underrated composers for days. Been really into Ryu Umemoto lately…it’s a shame he died so young.
Bijan Eghtesady (Drum Brachiosaurus): I like Dinosaur Jr. I think Feel the Pain was in Rock Band? That’s how I discovered them lol. 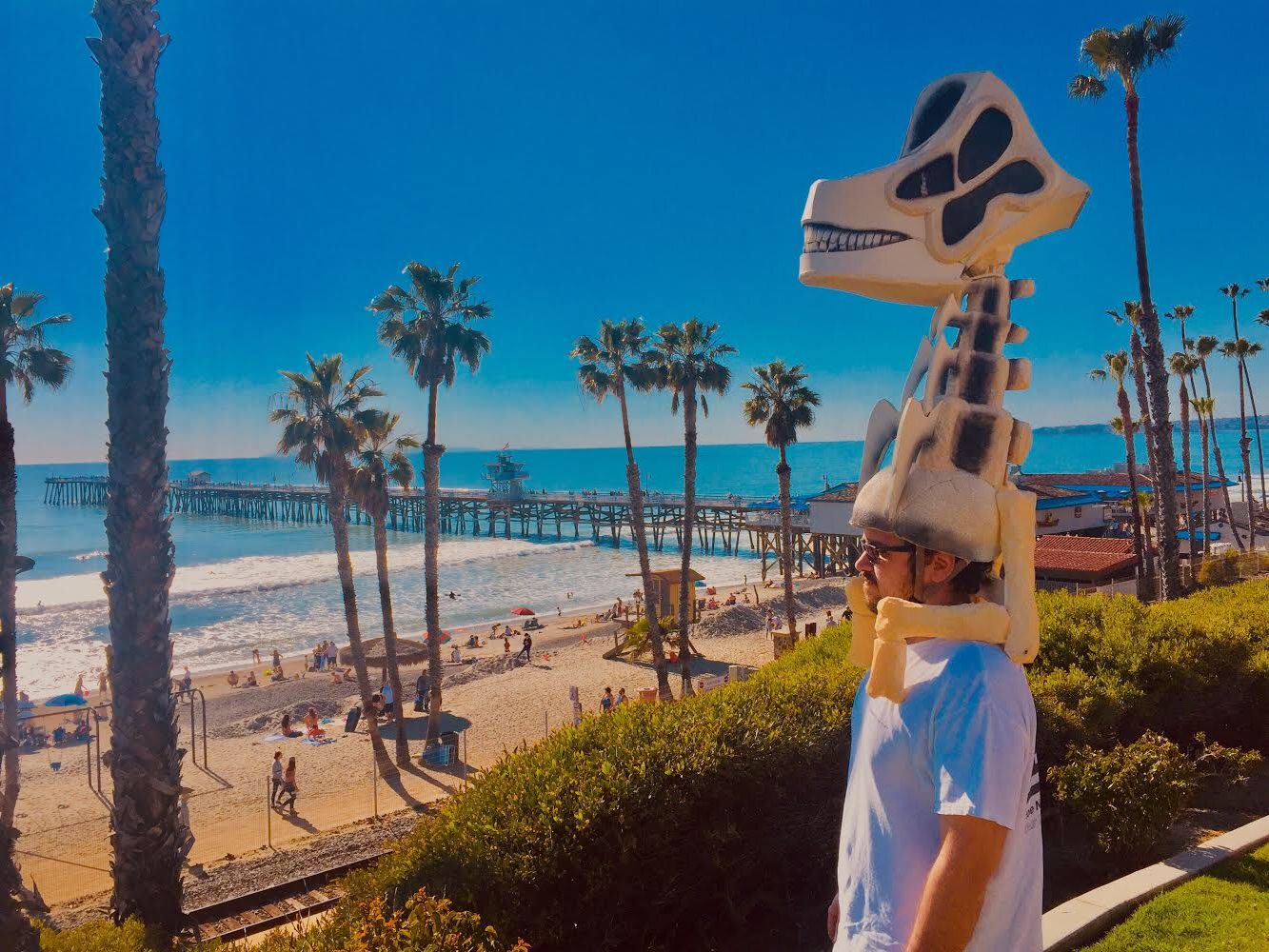 Ian Martyn (Guitar Parasaurolophus): My friend’s former band, Uphill Battle, went on tour with Mastodon. I’ve listened to some. It’s what I’d call prog stoner metal maybe? Haha?
Can you describe a BONEHENGE show for our readers? Like what could they expect to see at one of your shows?
Jon Allen (Vocal Dilophosaurus): Dinosaurs. Just to expand upon that SLIGHTLY, you get a lot of bang for your buck when you come see BONEHENGE, and we take a lot of pride in that. You’re getting great music, you’re getting comedy, and you’re getting something different than a lot of what else is out there. One thing that’s been pretty cool is how well we’ve managed to fit in with wherever we are on the bill regardless of who we’re playing with. Sometimes we’re a great compliment to the rest of the lineup, other times we’re a breath of fresh air. The bottom line is, when you come to see us, you’re going to be entertained, and you’re gonna have a great time…But yeah, they can expect to see dinosaurs. 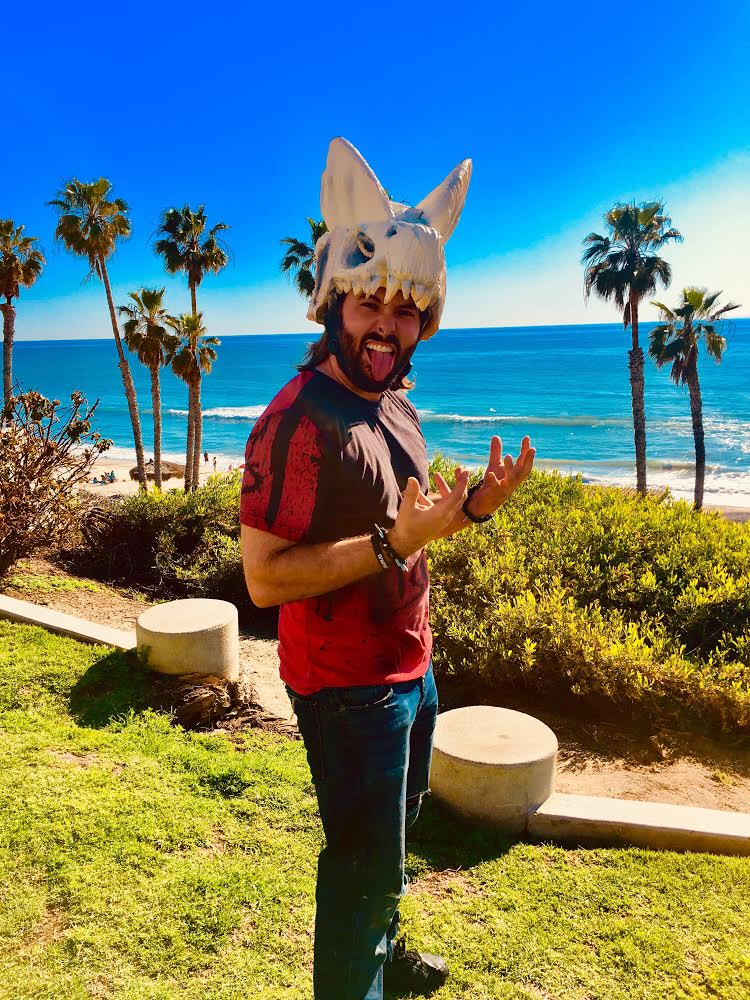 Also, what have you been doing lately when it comes to touring? Has there been a specific show that was your favorite?
Ian Luckey (Bass Triceratops): So far we’ve only performed around LA, Orange, and San Diego counties, but we’re still relatively new. A lot of the shows have been great for different reasons, but Aztec Brewery in Vista is one of my favorite places to play (we’ll be returning there August 24th), and Tomorrow! with Ron Lynch at Dynasty Typewriter was an absolute blast.
Bijan Egthesady (Drum Brachiosaurus): Dynasty Typewriter for me.
Jon Allen (Vocal Dilophosaurus): God, that was a fun one. Playing San Diego the first time was also kind of neat, especially since I’m from there. I loved those light up floors at The Merrow.
Xale Slusser (Saxophone Smilodon): Hard question—because as the newest addition: I loved Dynasty Typewriter and “Tomorrow!”, but I was nervous since it was my first gig—so my favorite overall gig so far has been at Fais Do-Do. 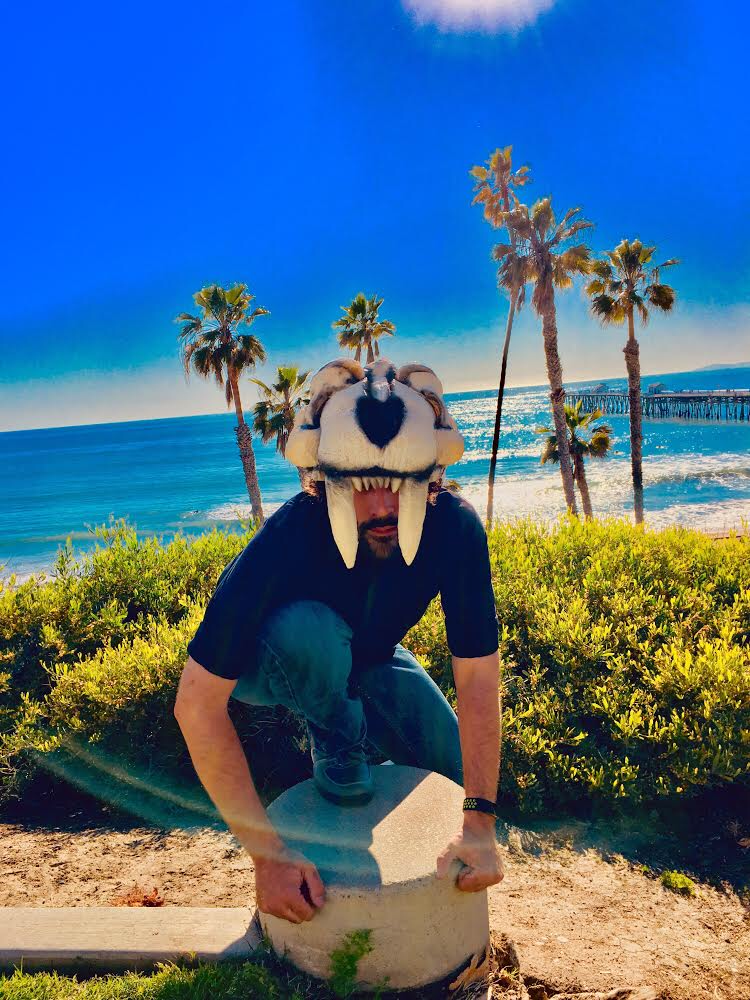 What is on the horizon for BONEHENGE? More touring? Or recording?
CeCe Luckey (Accordion Ammonite): We are in the process of recording our first full length album, so that is definitely our top priority right now. We recently released a single from the album as a preview, so that’s already available for download on Bandcamp. We’d love to do a West Coast tour. Also, keep an eye out for some really fun music videos we’ll be filming in the next few months. Lots of stuff planned for the future!
Yeah they are pretty badass, a phenomenal group to interview.  Great personalities that you can definitely hear when you listen to their music.  We here at Nerdbot really appreciate the time they took to speak with us.
You can check out tunes from BONEHENGE by clicking here and you can like them on Facebook.
They also have a YouTube Channel.
By Adam Chmielewski
@PolishKaiju
Photo Credits – Members of BONEHENGE/Wesley Hicks
Fossil Helmets courtesy of CeCe.
Have you ever heard of Dinosaur Rock? Let Nerdbot know in the comments!!