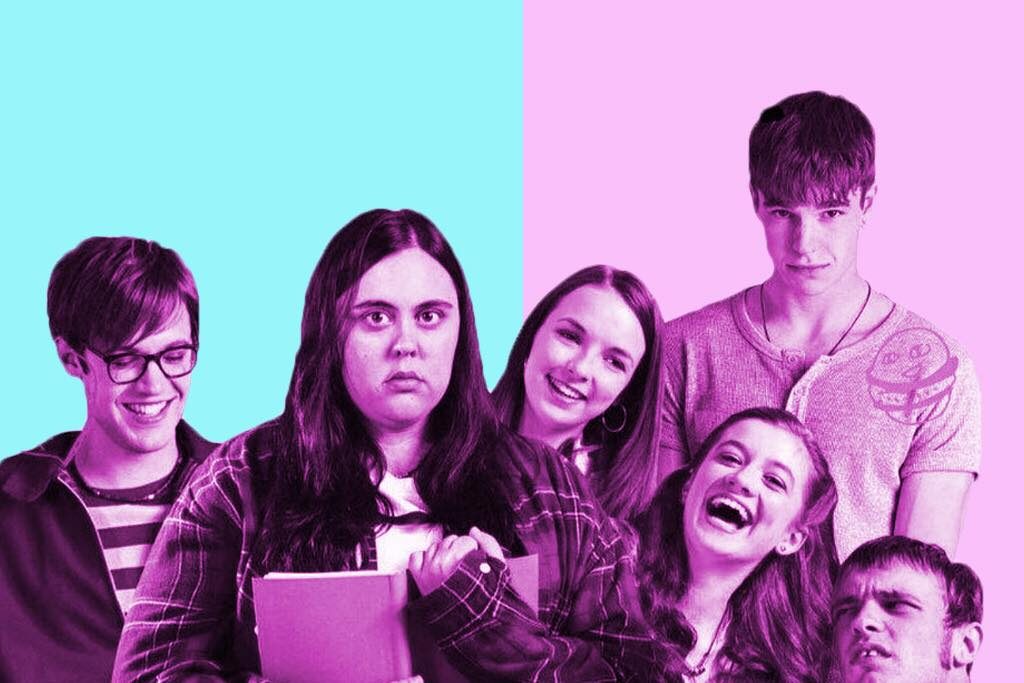 Ahh… My Mad Fat Diary, my favorite show that absolutely no one else is watching and all of my friends refuse to watch.

My Mad Fat Diary is a British comedic drama show based on the books of the same name by Rae Earl, who also happens to be the main character, played by Sharon Rooney. The show takes place in 1996 in Stamford, Lincolnshire, where 16 year old Rae has just been released from a four month stay in a psychiatric facility. On her way home, she runs into her estranged childhood friend, Chloe, played by Killing Eve’s Jodie Comer, and her group of friends. Chloe has been under the impression, thanks to Rae’s quirky mom, that Rae was in France for the past four months, so she asks Rae to join her and her friends at the  pub later to catch up, and thus we embark on an emotional journey of self discovery and mental health with Rae and her newfound gang of friends.

Rae initially finds it hard to fit in, but finds a way, via music, to catch the attention of the gang by picking the song that plays on the jukebox in the pub. This gains the attention of the bespectacled cutie Archie, played by Dan Cohen, and the grumpy Finn, played by Nico Mirallegro, and this impresses Chloe and so she invites Rae to her pool party to celebrate her friend Izzy’s birthday. The idea of a pool party and wearing a bathing suit in front of her new friends drives Rae to drink, leaving her with a hangover the next day. That day, Rae and Chloe go to try on bathing suits and Rae catches Chloe smoking in the dressing room. The smoke sets off the fire alarm, prompting the store attendant to evacuate the store while Rae is in a bikini. She wraps an inflatable alligator around herself and runs outside where people stare at her and she runs into none other than Archie and begins to have a panic attack.

She goes home and tries not to raid her mom’s cabinet for snacks, as she counts to ten. It doesn’t work and she binges on sweets. Feeling like a failure, she returns to the hospital to talk to her friend Tix, played by Sophie Wright. She tells her that she feels like she can’t function outside of the hospital and she wants to come back. Tix becomes livid and reprimands her, telling her that if she has a problem she needs to put on her Rae armor and charge at it, that she needs to fight, because Tix would give anything to be more like Rae. She tells her that she doesn’t like the real world because she doesn’t like herself.

With newfound confidence, Rae charges on to the pool party. After a while of feeling too self conscious to take off her robe, she finally decides to take it off and go down the pool slide, but gets stuck, her legs making a loud skidding noise on the plastic, drawing the attention of the whole gang and it is revealed that Rae has self harm scars all over her legs. She tries to make light of it and asks for Chop’s to help pry her from the slide, and the mood lightens and they all have a blast.

All of this is being told, by Rae, to her therapist, Kester, played by Ian Hart, who tells her to continue keeping a diary, as recommended by her previous therapist.

Through Rae’s diary we learn of her short foray into romance with Archie, who turns out to be gay, Chloe’s relationship with a teacher and subsequent pregnancy and abortion, Rae’s complicated romantic entaglements with Finn, and her mother’s romance and marriage to Karim and the fights it causes with Rae.

And that’s just season one! What? Did you think I was going to spoil the whole series? The complete series of My Mad Fat Diary can be found on Hulu and YouTube and consists of 16 episodes which span three seasons, and I highly recommend checking it out. The way this show handles mental illness is unlike anything I’ve ever seen before and it’s extremely relatable. I remember quite vividly being in that deep, dark place that Rae so often visits in the show, and I always thought I was alone, but this show has shown me that I wasn’t.