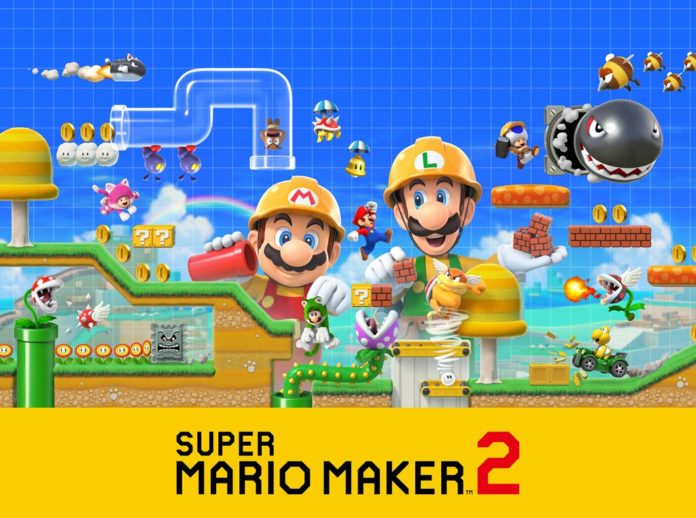 There was a time before Sideshow Collectables, before Gentle Giant were household names in the collectables world....
Read more

Growing up toys were front and center but many have been forgotten. Check this out and see if you remember any of these!
Read more

Breana Ceballoshttp://www.nerdbot.com
Hi! I am the Managing Editor for Nerdbot.com I enjoy watching anime, learning about new things and keeping up with Nerd Culture. I love writing and hope to introduce people to things that they may not have known about before through my articles. If you think you may be interested in submitting a guest article please check out the "Write for Nerdbot" section on the main page!
Breaking News

During the Super Mario Maker 2 Direct video presentation, Nintendo shared new details about the Super Mario Maker 2 game, launching exclusively for the Nintendo Switch system on June 28. The deep dive into the game revealed some of what’s new in Super Mario Maker 2, including new course parts and tools; a new single-player story mode with more than 100 Nintendo-created courses; new course themes; details about online course sharing*; options to create and play together with others**; and information about a special offer for Nintendo Switch Online members. The presentation also covered the upcoming Super Mario Maker 2 Invitational 2019 tournament, streaming live online the weekend before E3 from Los Angeles. The Nintendo Direct was stuffed with more fun goodies than a ? block!

“Super Mario Maker 2 puts the power of creating unique Super Mario courses into the hands of the player,” said Nick Chavez, Nintendo of America’s Senior Vice President of Sales and Marketing. “Video game fans of all ages have more tools than ever to help them stretch their imaginations as they make, play and share the Super Mario courses of their dreams.”

To view the Nintendo Direct video in its entirety, visit https://www.nintendo.com/nintendo-direct. Some of the highlights revealed in the video include:

Remember that Nintendo Switch features parental controls that let adults manage the content their children can access. For more information about other features, visit https://www.nintendo.com/switch/.

**Additional accessories may be required for multiplayer mode (sold separately).

About Nintendo: The worldwide pioneer in the creation of interactive entertainment, Nintendo Co., Ltd., of Kyoto, Japan, manufactures and markets hardware and software for its Nintendo Switch™ system and the Nintendo 3DS™family of portable systems. Since 1983, when it launched the Nintendo Entertainment System™, Nintendo has sold more than 4.7 billion video games and more than 740 million hardware units globally, including Nintendo Switch and the Nintendo 3DS family of systems, as well as the Game Boy™, Game Boy Advance, Nintendo DS™ family of systems, Super NES™, Nintendo 64™, Nintendo GameCube™, Wii™ and Wii U™ systems. It has also created industry icons that have become well-known, household names, such as Mario, Donkey Kong, Metroid, Zelda and Pokémon. A wholly owned subsidiary, Nintendo of America Inc., based in Redmond, Wash., serves as headquarters for Nintendo’s operations in the Americas. For more information about Nintendo, please visit the company’s website at https://www.nintendo.com/.

What Skills Can You Gain From Playing Video Games?

Whether you play casually, regularly, or even professionally, there are many different skills that you can gain from gaming.
Read more

Sega is coming out with the Game Gear Micro! Each color comes with four games.
Read more

We are pleased to report that Niantic Labs, the company behind such popular games as Pokémon GO (which yes, we are still playing thankyouverymuch) and "Harry Potter" themed Wizards Unite is pledging to donate at least $5 million dollars to Black Lives Matter.
Read more

If you're using video games to help cope with the current state of the world, it's ok! You're not alone, and sometimes...
Read more

4 Games That Can Improve Your Critical Thinking Skills

Games can be more than just fun time-wasters. The right game can also stimulate your brain and teach you problem-solving and logic skills.
Read more

All in all, MK 11 Aftermath is a refreshing return to a beloved franchise, adding new characters, finishes and a compelling story to keep the game fresh.
Read more

XBox Series X will be backwards compatible with all games & our favorite peripherals! Guitar Hero anyone??
Read more

You can now order the official "Art of Assassin's Creed Valhalla" book. There will be two versions, a standard and a deluxe.
Read more

There was a time before Sideshow Collectables, before Gentle Giant were household names in the collectables world. The one company that everyone...
Read more
Toys

Growing up toys were front and center but many have been forgotten. Check this out and see if you remember any of these!
Read more
Nerd Culture

The Hero’s Journal Turns Your Life Into an Adventure Story

It's easy to forget that life is an adventure. But with this you can keep track of your quests and accomplishments with ease!
Read more
Cosplay

Mochihoe (Mochi) is a cosplayer in Colorado who has been taking huge steps in their cosplays and is out there spreading POC cosplay awareness.
Read more

The giant extinct invertebrate Arthropluea could grow to be more than 1 1/2 feet wide and more than 6 feet long.
Read more

Next up on our 2020 bingo, a massive fuel leak resembles the first plague of the Egyptians. The River of Blood
Read more

On Monday police were called out to a possible cannibal crime scene were a bloody man was seen standing over the body of a woman.
Read more

It's a little late but at least it's cute! We've found this baby Darth Maul on Twitter drawn by "PAW Patrol" artist...
Read more

Get ready for the next season of the Mandalorian with a cool new Boba Fett dinner set!
Read more