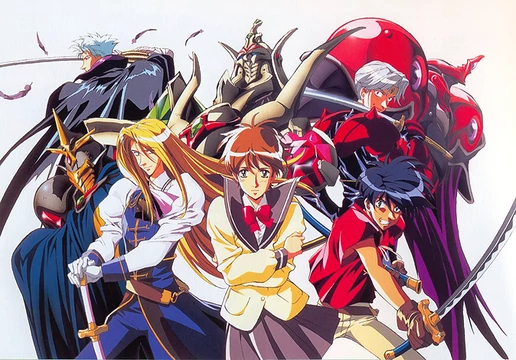 It’s Time Escaflowne Gets the Recognition it Deserves

Okay y’all, we need to take a moment and understand that, while our knowledge of anime was slim and next to nothing in the 90s to 00’s, we can openly admit that one anime flew under the radar. It’s time that The Vision of Escaflowne (Tenkuu no Escaflowne) gets the just rewards it freaking deserves.

Quick summary (thanks Internet) Hitomi Kanzaki is just an ordinary 15-year-old schoolgirl with an interest in tarot cards and fortune telling, but one night, a boy named Van Fanel suddenly appears from the sky along with a vicious dragon. Thanks to a premonition from Hitomi, Van successfully kills the dragon, but a pillar of light appears and envelopes them both. As a result, Hitomi finds herself transported to the world of Gaea, a mysterious land where the Earth hangs in the sky. In this new land, Hitomi soon discovers that Van is a prince of the Kingdom of Fanelia, which soon falls under attack by the evil empire of Zaibach. In an attempt to fight them off, Van boards his family’s ancient guymelef Escaflowne—a mechanized battle suit—but fails to defeat them, and Fanelia ends up destroyed. Now on the run, Hitomi and Van encounter a handsome Asturian knight named Allen Schezar, whom Hitomi is shocked to find looks exactly like her crush from Earth. With some new allies on their side, Van and Hitomi fight back against the forces of Zaibach as the empire strives to revive an ancient power.

This wonderful anime ran for five, count em five months! And not once did it ever feel like a filler episode at all. While the manga ran for three years! Sure it only had eight volumes, but you know what? You got quality over quantity. I distinctly remember when I was a kid, when I was done watching morning cartoons on channel five, I knew at 10 am on FOX Escaflowne was going to be on. (Looking at you siblings who made fun of me) Little did I know that this anime was actually the debut of one of my favorite voice actresses Maaya Sakamoto, and not only did she voice our heroine but also sings the opening!

After 26 episodes we had to say goodbye to our beloved characters, but in 2002 it was announced for a movie! Which does a retelling of the story, and Van well, he actually becomes even more badass.

If you have not checked out this anime series, I highly recommend you do so. It truly has everything you need to capture you from the get go. Mech, Characters, and even a soundtrack that doesn’t quit! Even the movie soundtrack is amazing. Did I mention that Maaya Sakamoto sings in Latin? No? Yeah, she does.