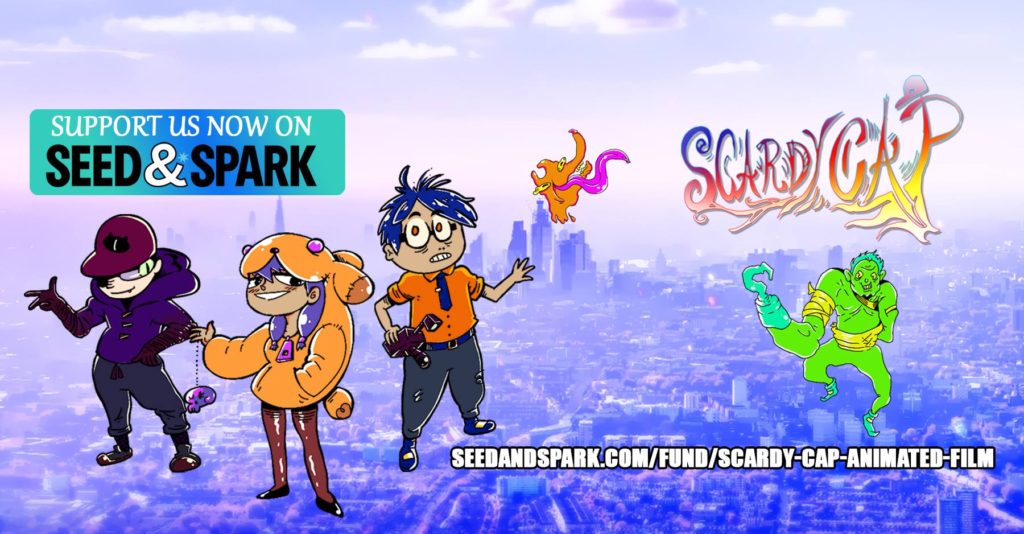 Scardy Cap is a new project headed by Nick Raith and Brendon Gillis. Nick an animator for Cartoon Network, worked on Regular Show the Movie as well as Uncle Grandpa. He also worked on America’s Funniest Home Videos, creating animations for season 28. Brendon was the mastermind behind the Nickelodeon animated short “Pig in a Blanket”. He is the artist that came up with the designs for Scardy Cap.

So what is Scardy Cap exactly? Well, Scardy Cap (Pronounced Scar-dy or Scur-dy cap, with a slight accent) is going to be an animated short following three kids who try and solve mysteries around their town. The mysteries are going to range from ghosts, to urban legends to paranormal and the kids each have a special skill set.

Scardy Cap is going to be completely animated in the United States and to be able to do it they have started a campaign on Seed and Spark so that they will be able to fund various stages of the project. Most animation now is outsourced to places like Canada so keeping it local would be a great feat.

I was able to interview Nick briefly about the project.

What inspired you to make a Scooby doo- esque story? Did you grow up in a town with a lot of urban mysteries?

So when coming up with the idea for Scardy Cap, Brendon and I wanted something that could be a fresh take on the “villain of the week” formula, We knew we wanted to combine an urban setting with fantasy elements so basing it on urban legends was natural, also Brendon is really good at drawing cute stuff and monsters. For the most part Los Angeles is a melting pot of cultures so I got a little bit of everything as a kid. The biggest urban mysteries I can remember from my teenage years were about the bomb shelter in the basement of my high school, the Chupacabra and how Echo Park had a bunch of dead bodies at the bottom (spoilers they drained the lake and didn’t find any).

Do you think after you do festivals with it, Scardy Cap could be picked up by a streaming service?

I am planning on doing my best to make that happen, I would love to get it on Netflix. Netflix has been super cool with animation and indie animated short films so I think it would be an amazing spot for it to end up. Ultimately we want to pitch it as a series, I just want as many people to see it as possible.

What cartoons did you watch growing up?

It sounds like a really neat project and I for one can’t wait to see the final product. If you would like to see it too consider backing the project! You can check out more information on Scardy Cap by following the link here.