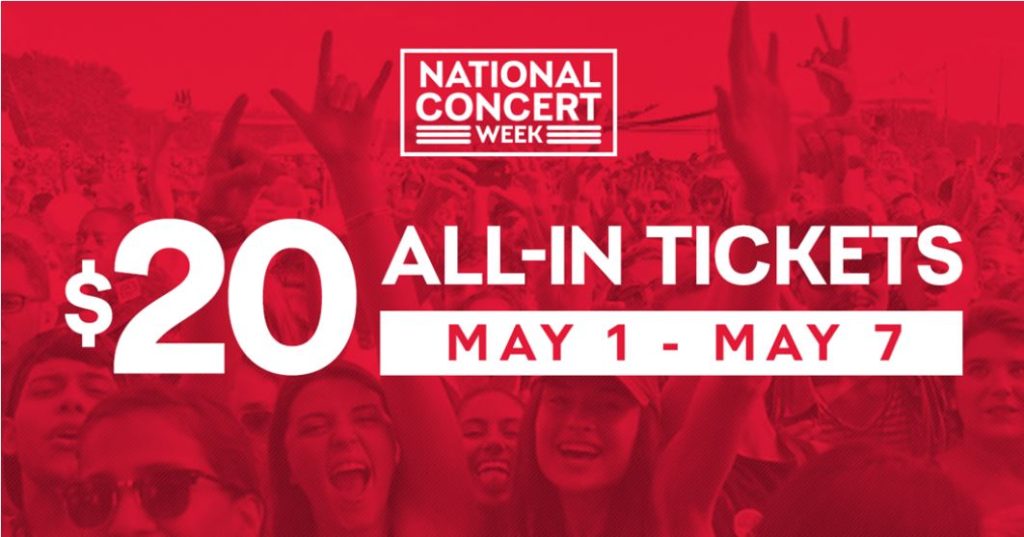 As we begin Summer, Fox Performing Arts Center and Riverside Municipal Auditorium announce a special ticket promotion. National Concert Week will take place from May 1st at 9 a.m. PST through May 7th at 11:59 p.m PST  where tickets to select shows can be purchased  for just $20 (all-in including fees). The tickets will cross multiple genres for every type of live event fan, including Country, Hip-Hop, Latin, Metal, Rock, Pop, and Comedy. To purchase tickets, visit NCW.LiveNation.com search desired show while quantities last.

The Fox opened originally in 1929 as a vaudeville house and movie theater, a beautiful integration of the Art Deco and Mission Revival styles of architecture. The theater’s rich history includes the first-ever screening (sneak preview) of the classic film Gone with the Wind, as well as its role as a temporary barracks for soldiers during World War II.  The theater was restored to its original splendor and re-opened by the City of Riverside in 2010, as a 1,600-seat performing arts center. The Fox Performing Arts Center is situated in the heart of Riverside’s downtown district within walking distance of many of Riverside’s prominent attractions.

The Riverside Municipal Auditorium (RMA) is a Riverside landmark designed by famed Mission Inn architects Arthur Benton and G. Stanley Wilson in 1928. This reinforced concrete Mission Revival style building is also a World War I memorial to the 87 military members from Riverside County who died in service of our country and was commemorated by the National Register of Historic places in 1978. The RMA has been enhanced and upgraded through a $10M renovation by the City of Riverside in 2011 and continues to serve the Community as a meeting, special event, and live performance venue. The RMA is situated in the heart of Riverside’s downtown district within walking distance of many of Riverside’s prominent attractions.