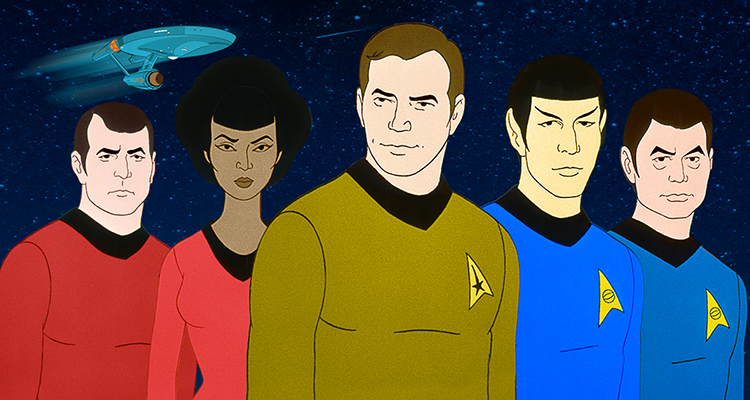 Nickelodeon and CBS Television Studios announced the greenlight of a new animated “Star Trek” series to be developed by Emmy Award winners Kevin and Dan Hageman (“Trollhunters” and “Ninjago”) and overseen for Nickelodeon by Ramsey Naito, EVP, Animation Production and Development, Nickelodeon.

Debuting exclusively on Nickelodeon, the series expands the “Star Trek” universe for a new generation of fans. The new original CG-animated series follows a group of lawless teens who discover a derelict Starfleet ship and use it to search for adventure, meaning and salvation.

“‘Star Trek’s’ mission is to inspire generations of dreamers to build a brighter future,” said Alex Kurtzman. “Dan and Kevin have crafted a story that honors its exploratory spirit in a way that’s never been done before, while the Nickelodeon team blew us away with their excitement at bringing ‘Trek’ to a younger generation around the world.”

“‘Star Trek,’ Nickelodeon, and the state of animation are doing incredibly ambitious things as of late. We couldn’t be more excited to jump aboard,” said Dan and Kevin Hageman.

“Partnering with CBS Television Studios and the creative masterminds behind the ‘Star Trek’ franchise is an incredible opportunity and allows our audience to discover rich characters and new stories,” said Naito. “‘Star Trek’ is a franchise loved by generations of fans around the globe, and adding Nickelodeon as home to the next animated series is a perfect fit.”

The animated series is the newest addition to the expanding “Star Trek” television universe. It joins STAR TREK: DISCOVERY and STAR TREK: SHORT TREKS, a series of short stories tied to DISCOVERY; the new untitled “Star Trek” series featuring Sir Patrick Stewart reprising his iconic role as Jean-Luc Picard; STAR TREK: LOWER DECKS from Mike McMahan (“Rick and Morty”), an animated series targeted at mature audiences; and a new “Star Trek” project based on “Section 31,” which is in development with Michelle Yeoh attached to star. All these projects, except the new Nickelodeon edition, are on the CBS streaming platform CBS All Access in the U.S.

Emmy Award-winning brothers Kevin and Dan Hageman have written and produced some of the biggest animated franchises in film and television. They served as co-executive producers on the Emmy Award-winning series “Trollhunters,” co-created the hit “The LEGO Movie,” wrote and executive produced “LEGO Ninjago: Masters of Spinjitzu” and developed the theatrical “The Lego Ninjago Movie.” Additional credits include “Hotel Transylvania” (story creators) and “The Croods 2” (writers), along with the upcoming live-action feature “Scary Stories to Tell in the Dark” (writers).

Dan Levy to Co-Write, Star in Guardian Angels Comedy For…

The new “Star Trek” series is the third animated series from CBS Television Studios, following STAR TREK: LOWER DECKS for CBS All Access and OUR CARTOON PRESIDENT for SHOWTIME.

Claudia Spinelli, VP Animation Development, Nickelodeon, is the executive in charge of the new animated “Star Trek” series for Nickelodeon.

Nickelodeon, now in its 40th year, is the number-one entertainment brand for kids. It has built a diverse, global business by putting kids first in everything it does. The brand includes television programming and production in the United States and around the world, plus consumer products, digital, location based experiences, publishing and feature films. For more information or artwork, visit http://www.nickpress.com. Nickelodeon and all related titles, characters and logos are trademarks of Viacom Inc. (NASDAQ: VIA, VIAB).

CBS Television Studios is one of the industry’s leading suppliers of programming for broadcast, basic and premium cable, and streaming platforms. The Studio’s programming includes the phenomenally successful NCIS franchise; the critically acclaimed STAR TREK: DISCOVERY; MADAM SECRETARY; JANE THE VIRGIN; CRAZY EX-GIRLFRIEND; the hit dramas SEAL TEAM, FBI, BLUE BLOODS, HAWAII FIVE-0, MACGYVER, MAGNUM P.I., THE CODE, BULL, INSTINCT and ELEMENTARY; the popular comedy series THE NEIGHBORHOOD; MAN WITH A PLAN; FAM; CHARMED, DYNASTY and IN THE DARK for The CW; the summer action-adventure series BLOOD & TREASURE; and “90210,” a revival of “Beverly Hills, 90210” for FOX.

The Studio also produces the Daytime Emmy Award-winning talk show THE TALK, as well as the Emmy Award-nominated late night series THE LATE SHOW with STEPHEN COLBERT and THE LATE LATE SHOW with JAMES CORDEN. For CBS All Access, the Studio produces THE GOOD FIGHT; STRANGE ANGEL; the streaming service’s first comedy series, NO ACTIVITY; WHY WOMEN KILL; INTERROGATION; THE TWILIGHT ZONE; and the highly anticipated adaptation of Stephen King’s bestselling novel, THE STAND. Additionally, as part of the expansion of the “Star Trek” universe, the Studio produces STAR TREK: PICARD featuring Sir Patrick Stewart reprising the role of Captain Jean-Luc Picard, STAR TREK: SHORT TREKS, STAR TREK: LOWER DECKS, which marked CBS All Access’ foray into the animation landscape, as well as the untitled “Star Trek” animated series for Nickelodeon. The Studio’s programming also includes series based on popular, viral segments from THE LATE SHOW with JAMES CORDEN, “Carpool Karaoke” for Apple Music and “Drop the Mic” for TBS, as well as “Dead to Me,” “Insatiable” and “Unbelievable” for Netflix. Additionally, the Studio produces the comedy anthology series “The Guest Book” for TBS; OUR CARTOON PRESIDENT and YOUR HONOR for SHOWTIME; DIARY OF A FEMALE PRESIDENT for Disney+ as well as “A Higher Loyalty,” a miniseries based on former FBI Director James Comey’s memoir.