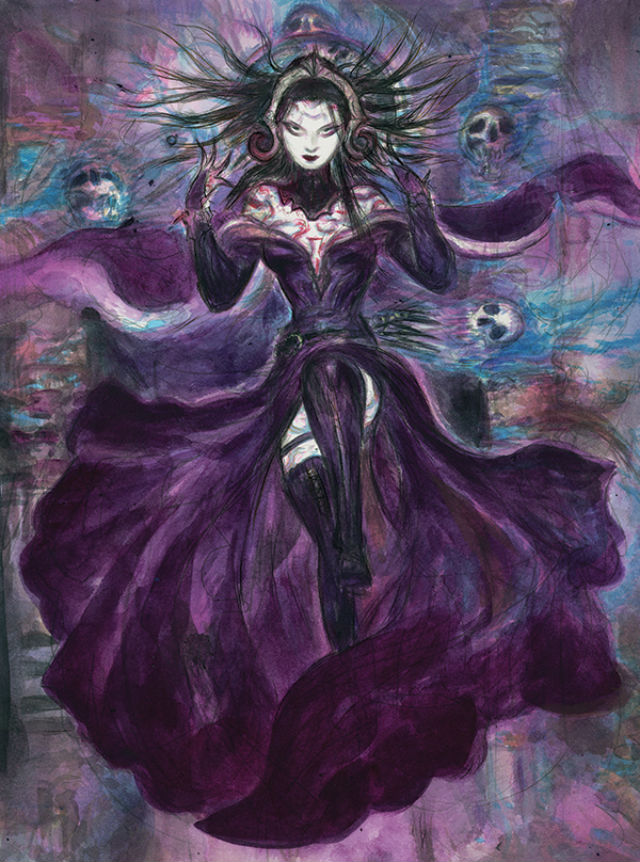 War of the Spark is setting up to be something truly spectacular. A colossal war bringing Planeswalkers from all across Magic history together for a confrontation against the powerful Nicol Bolas. It will be epic, and deadly for at least some if not a majority of the Planeswalkers we have come to love. Thanks to a recent announcement from Wizards of the Coast, we have one more thing to look forward to in an already much anticipated new set. Wizards of the Coast has teamed up with 28 artists from Japan to create 36 alternate War of the Spark Planeswalker cards.

These alternate illustrations will appear at a 50% rate in Japanese-language War of the Spark boosters. The cards will exclusively be printed in Japanese. They will also be available in Wizards Play Network promo packs during the Core Set 2020 play season. They will have a 1:4 appearance rate in these core sets.

One card in particular is garnering significant attention, Liliana- Dreadhorde General. For many RPG fans, the art style may be recognizable as the work of Yoshitaka Amano-otherwise known as the illustrator for Final Fantasy. In a statement on their official website about the alternate illustrations, Wizards of the Coast says:

“War of the Spark is all about Planeswalkers. With 36 different characters represented, the set truly showcases an all-out war for the fate of the Multiverse being fought on Ravnica.

We wanted to do something special to commemorate this event in Japan, so we worked with Japanese artists to create alternate-art versions of every Planeswalker in the set. All 36 Planeswalkers in War of the Spark were reimagined beautifully by artists well-known throughout Japan, including Yoshitaka Amano!”

You can see what all of the new illustrations look like below.