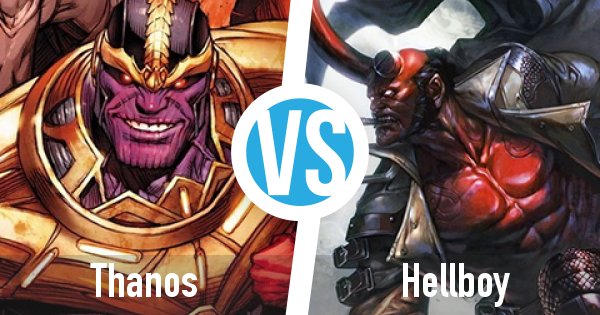 The Hellboy reboot isn’t doing too well with critics and fans. Reviews have been scathing and the box office has been lackluster. The movie premiered in third place behind Shazam! and Little with only a $12 million box office. But star David Harbour has faith in his character – he believes Hellboy would come out on top in a showdown with Thanos.

Hellboy first appeared in Dark Horse comics before Guillermo del Toro made two movies featuring the character with Ron Perlman as the lead. The recent reboot of the franchise directed by Neil Marshall and starring David Harbour was just released on April 12.

Thanos is the major villain in the MCU universe. In the recent Avengers: Infinity War movie, Thanos, using the Infinity Stones, was able to single-handedly wipe out half of the universe in the Decimation by simply snapping his fingers. Seems like something of an unequal fight, but David Harbour feels that his demonic character could win it.

What is Hellboy’s secret weapon you ask? Enquiring minds (and no doubt the Avengers) want to know. According to an interview Harbour gave to Entertainment Weekly, Hellboy could take down Thanos through the power of—jokes. Yes, you read that right. Hellboy could beat Thanos by making fun of him. This may not seem as far-fetched as it sounds, as Harbour feels that a good mocking might throw the Mad Titan off-kilter and allow Hellboy to take advantage of his momentary weakness. As Harbour said, “I mean it’d be a good fight. That Thanos guy is pretty powerful, but I think Hellboy would win the emotional fight by just making fun of the very serious way he takes himself and the way he takes himself in his Malthusian philosophies. I think Hellboy would have a field day with that and cut him down to size with one-liners.”

It’s a pity the MCU Avengers went with a more traditional physical confrontation. Their roster certainly boasts a number of characters who would be ready, willing, and able to mock an opponent. Perhaps that will be the strategy employed in Endgame? It certainly isn’t any more ludicrous than some of the ideas floating around out there (Thanus theory I’m looking at you here).

Well, we have just a few more days until we find out if our band of heroes employ some witty comebacks to disorient and defeat Thanos.

Sadly, Big Red won’t get a chance to take a crack at the big purple villain. Hellboy’s greatest challenge will be overcoming his bad press and making a comeback at the box office.