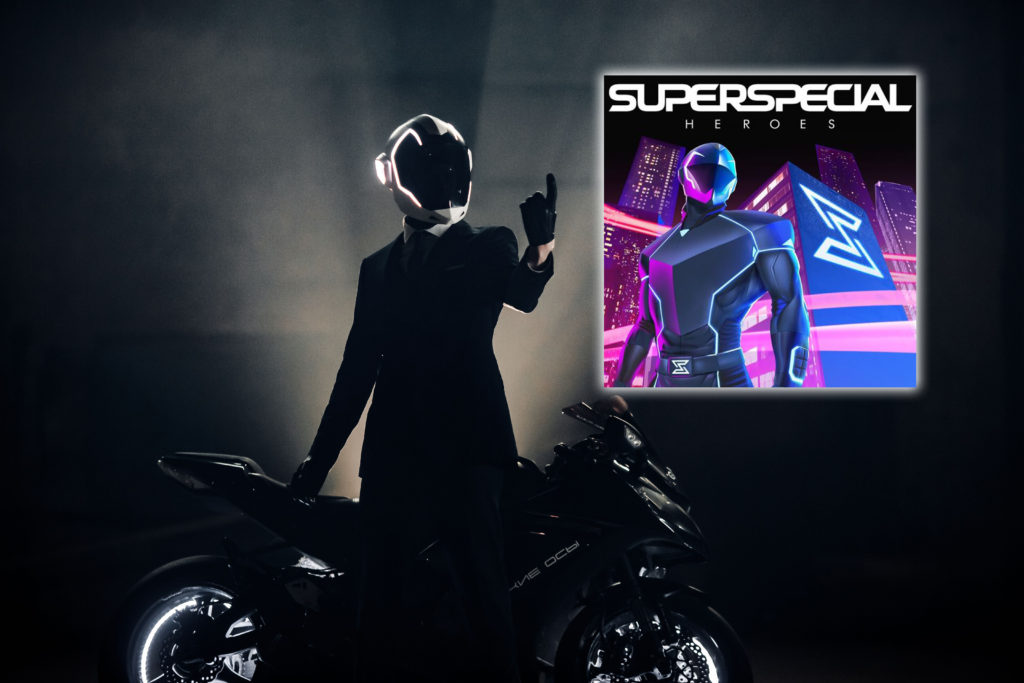 An Interview With DJ SUPERSPECIAL: Healing the World Through Music

DJ SUPERSPECIAL is making an interesting mark in the media world. A comic book hero as well as a real live DJ, you can find him in his comics as well as listen to his music. Reading the comic while listening to his single Heroes takes it to a whole new level as you get to experience the healing magic of his music first hand.

In the comic there is a mystery surrounding him as he gains these new powers given to him from his grandfather, who he has been estranged from his whole life. Finding out his parents were androids and gaining this special ability of healing through music must have been a shock for him.

I was curious about how he was taking all this so I reached out to SUPERSPECIAL and he was able to tell me a little more about his adventure first hand. But first, Check out SUPERSPECIAL’S Newest Music Video!

Can you tell me about yourself? What made you decide to become a DJ?

Nothing special, I’m a pretty average guy with pretty average dreams, hobbies and needs… Well other than the fact that I’m a hero, lol. However, Music is my dream. I fell completely in love with it during my very first open air concert. I realized it was something special. Huge crowds clapping in astonishment, people grooving to cult tracks… All of that fascinates me. I always dreamed of becoming a vocalist. I went to so many try-outs, I worked hard, I was really dedicated. Then again, it’s no secret that music is a dream, but it lives in a cruel and competitive environment.

It’s hard to put yourself out there, to be known. But I’ve come to realize that I’m not one to give up. I’ve realized, and this may seem strange, that music is something special. Not just for me, but for everyone. With music it’s different. You give more than you take. You fire up a crowd, you give people happiness. Generally speaking – you’re sharing a piece of yourself! And that piece isn’t personal, it’s for everyone. Music is what brings us together. One can save the world with a small concert.

What kind of music did you listen to growing up?

Oh, I’m a music head through-and-through. You’ll come to notice it as my music progresses. It was pretty difficult with heavy metal, though. I can’t tell you how many times my neighbors threatened to call the cops on me, haha. But that never stopped me from grooving. To me, music is all about mixing and matching different styles, melodies, sounds as well as a little bit of soulful mystery. In other words, whatever’s playing in your soul should be playing in your headphones.

What inspired you to tell your story through comic books?

I’ve always been fond of drawing. I love comics, always have. I have a whole bookcase full of them back at my parents’ house. Put mildly, I’m the kind of guy who checks his news feed every day hoping to see a new trailer of the Avengers or X-Men. I’ve always wanted my own story. My own hero. I mean, in my age people dream of becoming a hero, and it’s important to work towards your dreams!

Would it be a shock for you if find out your parents were androids?

Truthfully speaking, it would be hard to wrap my head around it. I mean, Harry is already a bit much for me. But real love and support from parents is something like a gift from fate. I don’t think I’d be who I am today without my parents having believed in me the way that they did.

How did you feel when you found out you had powers?

Oh, I don’t know, it was nothing special ya know…. You kidding?! I was bursting from excitement! It was so cool! What could be cooler than doing what you love, sharing that and recharging people with energy that we so desperately need? The greatest power I have is the ability to gift people with drive, to wake up their feelings and make them genuinely smile.

Frankly speaking, if all evil could be wiped out with just music and art, I would do it myself without batting an eye. And even though some say that that’s impossible, I don’t see anyone stopping me. As a racer by nature, I can say that I’m determined to get to the finish line. And I will most definitely fight for first place (laughing). My super power does good only through my sincere belief that music can heal this planet.

Has your grandfather explained who is after you?

That still remains as great a mystery for me, as it is for you guys.

Do you have any plans for the future?

I plan on continuing to give my readers and listeners more music, as well as more fun stories about my adventures, and the endless fight that we call the human experience. Well, and of course, I want to focus more attention on the problems in this world, I want people to care. After all, quoting the song Heroes, which I released quite recently, ‘We could be heroes.’ A hero lives in each and every one of us and I’ll give it my all to find that hero in everyone.

When can we see your next adventure?

Follow my adventures on my social media pages. The life of adventure doesn’t really go as planned, but I can tell you one thing for sure – it won’t be boring.

What can we expect to see next from you on the music front?

I’m currently working to release a few more tracks, hopefully in the next few months. I’ve got plenty of ideas; the issue is figuring out which one I have to focus on first. These days, I’m also preparing myself for my debut show in Amsterdam. Really excited about this and hope to see you guys there!

Listen to SUPERSPECIAL’S Music Here
Follow him on Instagram and keep up with his adventure by reading the comics!