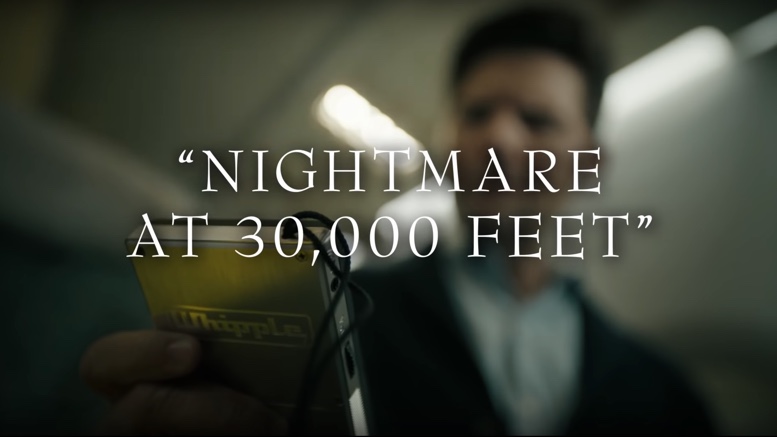 Previously on my review of the Twilight Zone, a comedian got all that he ever wanted but paid the ultimate price. Laughs were plenty, terror was in high supply, nostalgia was nice and seasoned in. All of that turns in slightly different directions as we journey into the review for episode 102 of the Twilight Zone: ‘Nightmare at 30,000 feet’

Don’t Call This A Remake

I mean in a way it’s one of those “retelling” crap that tries to tackle the same topic as before but ultimately fails. When this episode was announced, I was wary.
My toxic fanboy came out, with a shiny new pitchfork, and demanded a reason why this particular episode needed to be “remade”. Turns out, it wasn’t remade but just brought to the 21st century.
For those who haven’t seen the original episode starring William Shatner, it’s about a man who’ve recently had a nervous breakdown board a plane and starts seeing gremlins.

Obviously, no one believes him so he causes a ruckus on said plane and they had to land to take Shatner off.
But what’s this!? The plane, in a delicious reveal, is severely damaged and was just thissss close to completely falling apart.

TL;DR: The episode was about mental illness and how we as a society deal with it.

Look at me, I’M the Captain Now.

All that history lesson brings us to this current 2019 Adam Scott (Parks and Rec) rendition of almost the same story.

Scott’s character is slowly driven toward apprehension and outright panic by a mysterious true crime podcast that purports to investigate exactly how the flight he’s currently on will disappear forever. We are given a few backstories here and there about Scott’s character but none of it really pays off.
My biggest question was, what era of the Twilight Zone are we in where people still have MP3 players???

Unlike so many Twilight Zone protagonists, Scott’s character is quite in the moment and goes along with the weird turn of events. He’s careful in his approach about this mysterious podcast and even tries to get other people to listen in. His will to try to save the plane, possibly as overcompensation for some form of PTSD, is his undoing.

It all plays out in a fashion that’s familiar to those who watched the original, as Scott falls into paranoia in his attempts to use the podcast’s information to determine what will cause the plane’s destruction.

In his blind pursuit of finding out how the plane goes down, he meets another pilot, played boringly by Chris Diamantopoulos, catching a deadhead on the flight. Scott’s anxiety gets the best of him and shares with the pilot of what’s to come. Somehow guessing the code to the cockpit, cause why not at this point of the story, Scott’s character watches the pilot rush in just to hijack the plane. The plane goes down, JUST LIKE THE PODCAST SAYS, and somehow everyone survived.

Then Adam Scott gets murdered by a mob.
The mob was later rescued by a passing ship. The end.

The hell was the point of all that? If this was to harken back to the old episode about mental illness, I would say Peele and Co. missed the mark.

That’s disappointing considering that the first half of the episode was really good and engaging!

Then the 3rd act simply fell apart because the ending felt disjointed and cheaply written. How does the saying go??