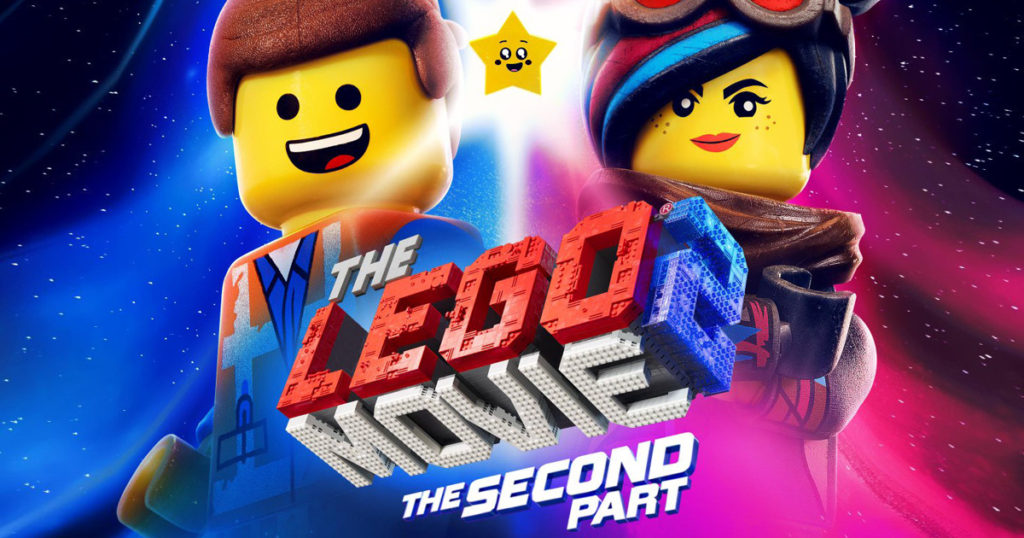 Back in 2014, we weren’t exactly sure what to expect from a movie about plastic building blocks. Since then The Lego Movie and Lego Batman have set the bar rather high for films in the franchise, and The Lego Movie Part2 manages to meet those expectations rather well. (Lego Ninjago, not so much)

It has humor and action as well as some bright, catchy tunes although none that are all that memorable (despite one being called “The Catchy Song” with a line saying “this song is gonna get stuck inside your head”). Stephanie Beatriz as General Mayhem and Tiffany Haddish as Queen Watevra Wa’Nabi are both good additions to the cast. Queen Watevra Wa’Nabi especially really does dominate her scenes in the Systar System. There are a few twists and surprises along the way as we end with a message about getting along. Really, the only problem with the movie is a bit of sequel-itis. What was fresh and new in The Lego Movie has worn off a little in Part 2, which must now struggle to meet raised expectations. At least Lego Batman (and Lego Ninjago) had the benefit of new settings and characters to give them a fresher feel. I found the movie fun and enjoyable and it did quite well in living up to some heavy expectations. I might not have loved it quite as much as The Lego Movie or Lego Batman but I am still glad I saw it.

The movie picks up where the first left off.  At the end of The Lego Movie, when Finn had reconciled with his dad, Finn’s dad said that now Finn’s little sister Bianca would be allowed to come down and play. In Brickland this translated to a group of Duplos appearing to say they were going to destroy everything. Fast forward 5 years from that initial appearance and things have changed in Brickland.  There have been repeated attacks by the denizens of the Systar System, which particularly target anything bright and cheerful.  This has led to the transformation of the land to a dark post-apocalyptic dystopia now called Apocalypseburg

The Justice League (minus Batman who was off enjoying his own movie adventure) took off to confront the invaders but haven’t been seen since.

Apocalypseburg is a land populated by mutants and cyborgs, where the denizens have all hardened in response to the calamity of Taco Tuesday and where the only cheer is provided by coffee according to Lucy aka Wyldstyle. Everyone, that is, except for Emmett.  Emmett has retained his naiveite and his optimism and that puts a strain on his relationship with the more pessimistic Lucy who just wants him to grow up. Instead Emmett has been busy building his dream house and is eager to show it to Lucy (admittedly, it is pretty cool with more underground goodies than Wayne manor). No sooner does Lucy berate Emmett for his foolishness, pointing out that the cheery yellow house is just begging for an attack than they are attacked. There is a wild chase, a retreat to a bunker, and Batman unleashes some bad Bat-itude on the invaders. Unfortunately, General Mayhem of the Duplos is still able to kidnap Lucy, Batman, and some other Lego character and takes them away to the Systar system (aka Bianca’s bedroom).

So, Emmett vows to rescue Lucy and his friends, rebuilds his dream house to a ship and takes off with his plant to try and get to the Systar system.  Things aren’t going too well for Emmett until he is rescued by Rex Dangervest and his crew of velociraptors. Rex is something we haven’t seen before, a Master Wrecker, and under his tutelage Emmett tries to toughen himself and become a Master Wrecker too.

Meanwhile, back in the Systar system our captured Legos are introduced to shapeshifting Queen Watevra Wa’Nabi who declares her desire to wed Batman. Soon she is luring the Legos over to her side with some bribery and a little brainwashing from a catchy tune (or in Batman’s case by playing on his rivalry with Superman). Only Lucy escapes to rejoin Emmett and Rex in their quest to disrupt the matrimonial ceremony. However, she learns that things aren’t as they appear, that most of the conflict is due to poor communication, and that stopping the ceremony could lead to Our-mom-aggedon. But she is unable to stop Emmett from wrecking the ceremony. In the real world this translates into Finn wrecking Bianca’s construction and taking back his Legos. The siblings fighting causes their mother to order them to dismantle their Legos and put them away. The Our-mom-aggedon has arrived!  Is this the end?

Of course not! Who would end a movie on such a downer? (looking at you Russo brothers) Eventually Finn and Bianca reconcile and start playing together in a world that encompasses both their creations. Which you probably could have guessed before you ever saw the movie.

While Lego Movie Part 2 has been well received (currently 85% on Rotten Tomatoes) it has been underperforming at the box office. Although it came in as #1 it only brought in $34-35 million instead of $50 million or so. The 5-year span between the original and the sequel as well as brand fatigue from the spinoff Batman and Ninjago movies are two of the possible reasons for the drop. An ad campaign that doesn’t attract older viewers may also play a part.

Bottom Line: Did I love it as much as the original or even Lego Batman? No, not really. Did I still enjoy it? Yes. So maybe adjust your expectations accordingly, don’t weigh it down with too heavy expectations, and go enjoy a movie that is still pretty awesome.