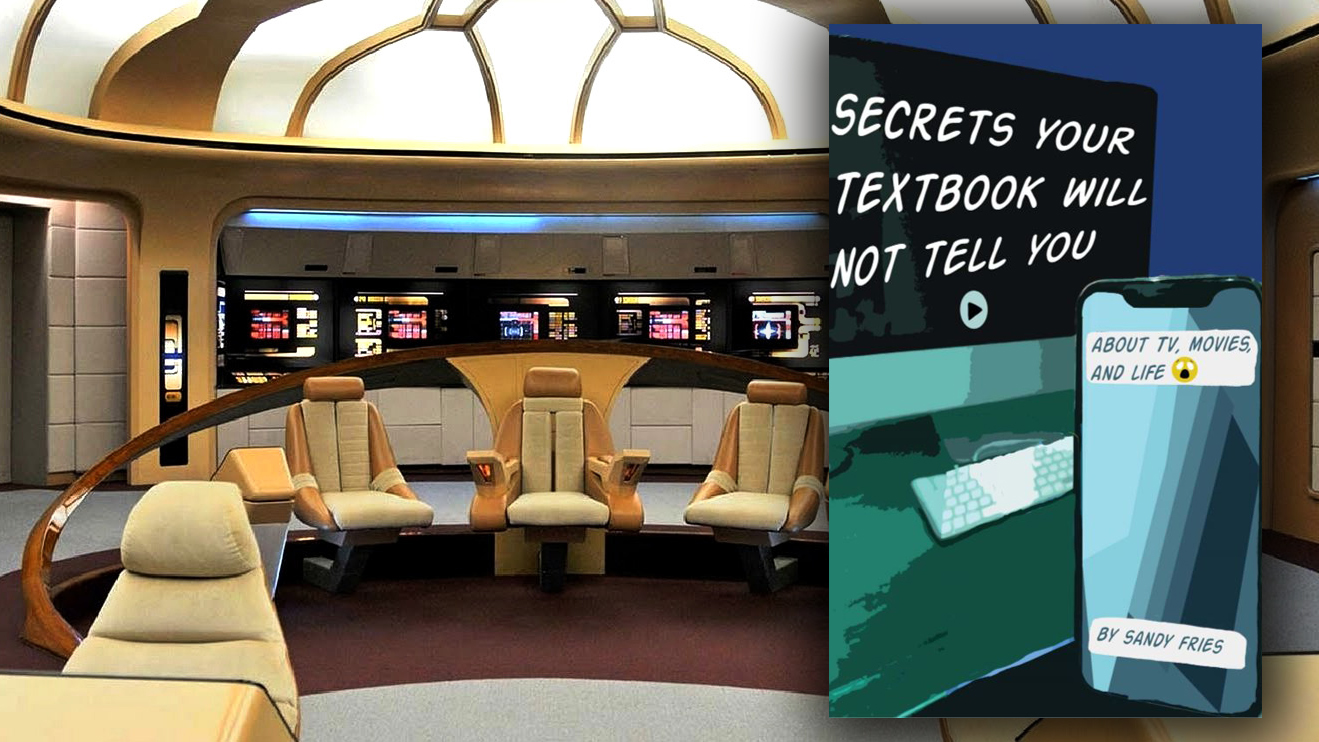 I don’t think its a secret that I love Star Trek and love to learn any trivia about its nearly 60 year history. Which is what drew me to the book ‘Secrets Your Textbook Will Not Tell You.’ I have to admit that when I first picked up this book it was mostly because the author Sandy Fries was a writer on Star Trek the Next Generation. The book seemed to be a way to get some real first person perspective on what it was like to be apart of that show. It wasn’t until I started reading that I realized how valuable this book really was in how to understand what it is like to write for television.

I had thought to myself I would just read a couple of pages at a time. However, the breezy pace hooked me pretty quickly. The book flows so easily that you end up losing yourself in the stories that Fries tells you. His conversational tone and the fascinating stories he tells provides a window into being a professional writer. When reading the book it is easy to put yourself there inside the story. He writes it so that you can actually picture it, you aren’t reading about someone else’s experiences, you are seeing it first hand.

Sandy goes into detail what it was like to work with some of the greatest minds in show business. His stories go beyond Trek and go into some other classics of 80s-90s tv like Quantum Leap. Fries also has experience in animation as well, having done work for the likes of Hanna Barbera and even the great Stan Lee.

Some of the encounters mentioned are the most entertaining thing that I have read in a long time. He is able to illustrate what these people were like and we can get a glimpse into some part of them.

There are a lot of great stories in this book. I would have to say one of my favorites was this interaction that Fries had with Roddenberry when talking about Stardates.

“During another meeting with Roddenberry and four other producers, we
spent a half hour figuring out the details of how Star Dates worked. How long was a Star Date? How many months? An assistant rapidly took notes on our conversation. When we finally figured out how Star Dates worked, I raised my hand and, attempting humor, said, “Gene, what happens to the Star Date on a Leap Year?”

Roddenberry looked at me sternly and said, “Sandy, it’s my future. I abolish leap years.”

Trying to pick through quotes is so hard because I don’t want to give away too much of the book. I want you to read all these amazing stories! There are encounters with everyone you would care about from the president of CBS Fred Friendly to William Shatner to Bill Clinton!

This isn’t just a book about making it in the world of writing. As you can tell from the title, the book is also an advice guide on how to try to be a television writer. Fries is also a professor in Chicago for DuPage University so he knows what they teach in a writing program and knows what works and what doesn’t.

You can apply any of these tips to your everyday life and become more successful. A lot of the advice in this book is invaluable. It is filled with things that need to be addressed but seldom are in college. For example you can’t have a bad attitude when working on something. It’s easy to fall into a bad habit of negativity but in order to really succeed and have people want to work with you, you have to keep yourself in check. I don’t want to just list off his tips simply because it is worth the time to read his advice in his own words. It never feels like a lecture and more like a conversation about how to learn from one person’s success.

I think everyone should read this book. Even if you aren’t interested in writing professionally, there are engaging stories that are worth the time to read. Even if you are not a fan of Star Trek and just want to hear some amazing stories about being a part of monumental television, you need to read Secrets Your Textbook Will Not Tell You.

You can pick up your own copy of Secrets Your Textbook Will Not Tell You here.