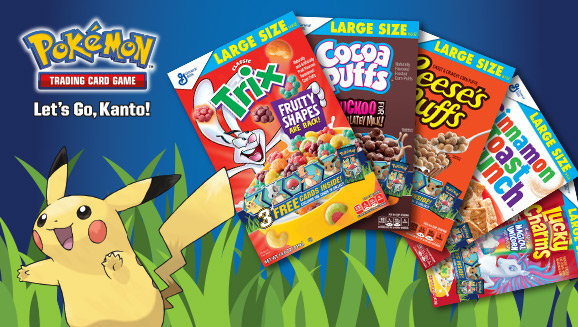 Pokemon Cards Available in Cereal Boxes For a Limited Time!

Good news Pokemon fans! For a limited time you will be able to get packs of Pokemon TCG in Big G(General Mills) cereal boxes. The promotion runs until March 30th. You can find them inside specially marked boxes of
Cinnamon Toast Crunch, Lucky Charms, Cocoa Puffs, Trix, and Reese’s Peanut Butter Puffs.

General Mills will be including packs of three Pokemon cards inside boxes. The Pokemon in the promotion are from the Kanto region so think classic 150 Pokemon here. They have thirteen designs total you can get.

Inside each pack you will receive two normal cards and one foil card. The four foil cards you can get are Pikachu, Eevee, Charmander, or Cubone. They offer a special foil card as a bonus if you shop at Walmart, they are getting exclusive Bulbasaur foils that are included in some packs.

This is a lot like the promotion going on at Build-a-Bear right now where if you make a Pokemon you get a special Pokemon card with the animal. They also have Pokemon card packs at the counter when you check out with your Pokemon pal for purchase.

It’s also not the first time pokemon cards have been available in cereal boxes with the last time being around when Sun & Moon came out.

With Detective Pikachu coming to theaters May 10th this year it seems that The Pokemon Company is in for a big push to get kids who aren’t already into Pokemon into it. It is very smart advertising. I know my kid is already asking to see it.

What do you think of the new promotion? Will you be getting any Cereal for the Pokemon cards inside? Tell us in the comments!