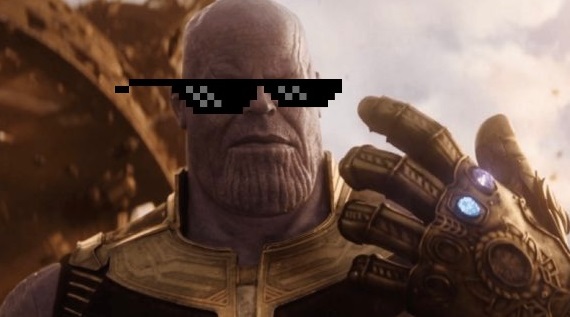 Hot Take Alert: Thanos was straight up an evil monster and, yeah, he wasn’t very smart when it came to using the Infinity Gauntlet.

In the comic book version, Thanos has a clear goal: Ending half of all life in the universe would win him his true love, the embodiment of Death. Here, committing insane mass murder wasn’t for any heroic means. Thanos didn’t want to save a dying universe or alleviate the destruction of his home world. No, he just wanted to hook up with Death. 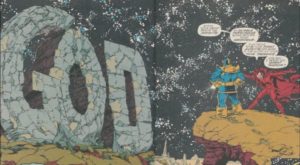 Image: Thanos thinks highly of himself.

However, in the MCU we see an emotional, brooding, and determined Thanos. He has seen so much death and destruction because of unchecked life and civilizations. To Thanos, the only way to fix the universe is with a snap… A single moment that will wipe out half of all life in the universe at random, leaving the remaining half to prosper and hopefully learn from the mistakes of the past. It is the masterful directing, world building, and a great actor that bring everything together to make such a fantastic film.

Thanos has all the hallmarks of a tortured villain. Joshn Brolin gives him life and humanity with moments of sadness and self-reflection. We believe that Thanos truly wants to help the world and will do the things that others cannot do, making hard choices, so that he may retire knowing the universe is saved from itself… 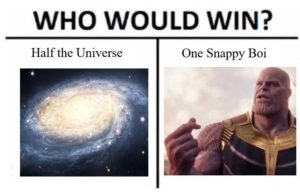 Unless you have a basic understanding of the Infinity Gauntlet and physics.

Then, you see, Thanos is a mass murdered blinded by revenge and some quest to stop and consider that there are about 700 better options than, you know, murdering half of the life in the universe. In fact, there’s his first stupid idea.

HALF OF ALL LIFE

If perhaps Thanos had spent a few minutes to consider what he could do with the most powerful weapon in the universe, he might think that killing HALF OF ALL LIFE was a royally stupid idea and would not actually fix the problem he was after. A lot of people seem to think that Thanos’ snap killed half of all human-like creatures. But, nope, not at all.

Gamora expressly states half of all life. Period.

Oh, and Kevin Feige expressly stated that, yup, half of all birds and hedgehogs and weird alien plants are gone. So cannon straight from the mastermind behind the MCU is that Thanos killed half of all humans BUT ALSO half of all the resources those humans need to survive. So, instead of fixing the problem he merely made it the same problem by half.

Thanos has a goal of fixing overpopulation by sentient life. That might be great but not if there’s half as many chickens, trees, and fish. That defeats the entire purpose of his snap and is confirmed by Marvel. So, yeah, he didn’t think that one through.

RANDOM IS A BAD IDEA

But at least it’s random, so half of murders and half of war criminals are now gone. Though… if, say, someone smart had the gauntlet – Lex Luthor? Dr. Doom? – they might make the weapon more, uh, specific. If you want to save the universe from itself, why are you taking half of all doctors, scientists, and chickens and not taking a much larger percentage of deadly diseases, murders, rapists, or something that most beings in the universe can get behind.

Oh, and there’s another huge reason randomly killing half of all life is a stupid idea for sentient beings here. 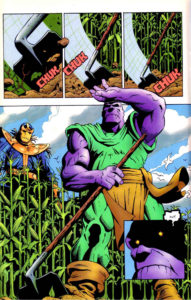 Imagine you have 10 people. Maybe 5 are brilliant or highly skilled people that society NEEDS… the woman who is about to cure cancer, the kid who is going to write the greatest book over… and the other 5 are criminals and con men.

Random could mean that every single doctor, scientist, and artist on a planet dies and then the remaining 50% are a few regular folks but then every single criminal, murderer, lazy person, or just people who don’t have the special skills needed.

So, then we have things like nuclear plants melting down, people dying of disease, plans falling out of the sky, or even an entire planet where the 10 people who HAD TO BE ALIVE to keep something bad from happening are gone, so… KABOOM! 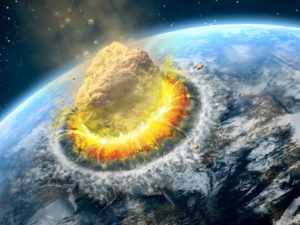 Image: Oops. The Soul Gem trapped the one woman who could run the Planet Protection Machine.

The 10 astronauts trying to stop a comet from crashing in to your planet just turned to dust but, hey, the 10 mumble rappers popular on your alien planet streaming service are alive!

Enjoy that for the next 16 minutes until all life ends because Thanos’ snap randomly took the people you needed. So, Thanos won’t be killing half of all sentient life or half of all life in general. He will actually be doing a larger number than that to eminent doom and…

Even if you don’t care about sentient beings and civilizations losing half of their population IF it’s for the greater good, they’ll probably die anyways from disease or food webs dying or just the entire planet losing all its oxygen because that one species needed is now gone. Hell, the planet might plunge into an ice age because everything is completely out of balance. Or worse.

If the snap is truly random and, as Marvel states, takes half of all life… Imagine if all the trees are randomly gone. That would be far more devastating than all of the horses or pigeons. There are plants and animals on earth that are so crucial to the ecosystems worldwide, if they disappear, that’s going to lead to huge ecological and economic problems. 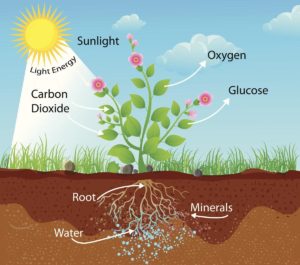 Image: Oops. Thanos took all the plants on Planet Z and also the three squid people working on stopping that deadly pathogen.

All the bacteria that eat feces are gone? All the dung beetles are gone? Enjoy the remaining tigers because that 50% missing means you’ll be knee deep in crap and probably dying of terrible intestinal diseases in a few weeks. Assuming the random Thanos snap didn’t take all of the gut bacteria you need to digest your food or all the farmers growing your food.

AND IT ISN’T REALLY RANDOM

Thanos shows us that he’s at least a caring monster. He makes sure his 50% killed is random. Well, as long as you aren’t Thanos. Thanos can’t die because he has the power of the Infinity Gems so, yeah, he’s safe. Automatically that isn’t random and is self-serving. What a hero! It’s pretty easy to do that awful thing as long as you are safe and sound growing corn on your farm.

And though they haven’t YET showed up in the MCU, we can assume there are other beings who are safe from the snap and we’d classify as living. Maybe they are in astral form. Maybe they are just so powerful the snap doesn’t mean anything to them. If you’re, say, Galactus there’s probably a much better chance you aren’t going to disappear because you are essentially a god and beyond the powers of some silly stones. So, randomness and equality kind of goes out the window because Zzyzx the Alien Ant Farmer is far more likely to blink out of existence than the Beyonder or Eternity. Oh, and if some of those all powerful beings do turn to dust…

And what if the giant alien being living inside your planet turns to dust and your whole planet collapses? Or the planet IS the living being, like Ego! RIP you guys. Sorry, that was more than half. 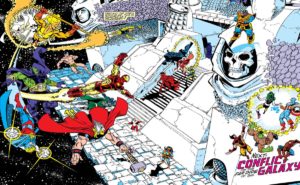 Well, let’s just hope that wasn’t the being that controlled time or gravity or something that just got trapped in the Soul Stone in a cloud of dust. Like if Eternity or Infinity which are classified as living, sentient embodiment of important things like the universe itself, well… There goes all of reality.

I’m betting the guy who didn’t consider that getting rid of half the crops and half the nuclear technicians in the universe was a bad idea probably didn’t plan ahead for living beings whose powers are so great they hold space and time together.

Thanos might’ve made a couple of bad choices in pretending randomness and taking half of ALL life, but his basic idea was at least good…

THANOS ONLY CARES ABOUT DEATH

Thanos isn’t a benevolent murderer, willing to kill so that life may continue. He’s strictly motivated by revenge and ego. He’s shown violent tendencies. He surrounds himself with violent sycophants. And he’s never read one physics or biology textbook. He tortured his own children that he claimed to have loved at least one of. Nothing screams “hero we deserve” like the guy who made his two daughters fight and then turned one into a cyborg for losing. 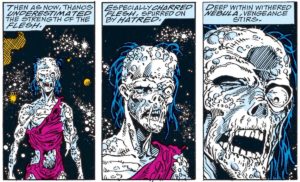 Instead of killing half of all life to reduce overpopulation and resource competition, he had about an infinity number of options

Assuming basics physics still exist that no power can change, matter cannot he created or destroyed and the universe moves towards entropy  BUT the universe is largely empty and most objects aren’t habitable. If Thanos cared about helping the universe instead of just murdering half of it, he could’ve taken a bunch of the unusable planets and moons and move them into habitable zones, altering their chemistry, and simply doubling the number of places life can live.

Or make a bunch of life sterile. No death and the goal is still achieved.

AND HIS SOLUTION WON’T WORK

Assuming the MCU works like our reality, it might only take a few million years for life to get back to the point it was, eating up resources and destroying things. That leaves a few billion years for the universe to be just as bad or worse than it was. Thanos’ grand plan will last for the blink of an eye in geological time. Earth has had mass extinctions that were as bad or worse than the snap and, hey, life came back pretty damned fast.

For all his tears and soliloquy-loving talks, Thanos didn’t fix any problems, didn’t think, and just wanted to kill things. And none – not one being – around him suggested any of the myriad of better options.

Thanos of Titan isn’t an ecological savior, a flawed hero trying to prevent life from destroying itself…

Thanos is a bastard with a really powerful weapon who likes to kill things. He’s a kid burning ants under the guise of controlling ant overpopulation. He’s so very wrong, so stop trying to support his dumb plan. He is a straight up evil villain. Not a tortured and twisted being with a heroic intention distorted and bent. He isn’t Magneto or Dr. Doom or any of the myriad of bad guys who might do wrong for the right reasons or are capable of doing good, just things between the terrors… 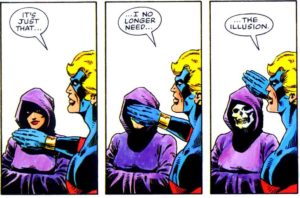