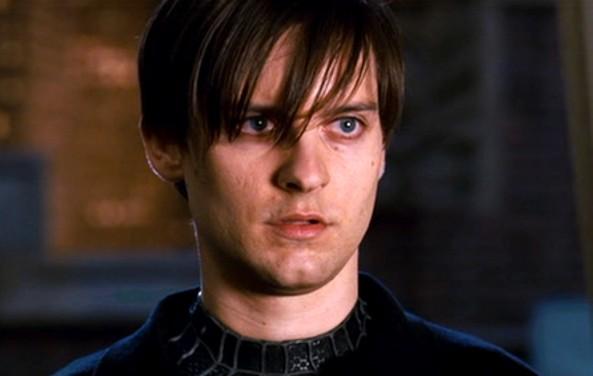 Time to get out the tissues and your Thursday records because we’re getting emo up in here!

Believe me, I’d love to do a ten thousand word article highlighting some of the greatest works to come out of the punk rock sub-genre but today we’re here to discuss another figure in emo culture who is ripe to re-enter the limelight… Emo Peter Parker. On December 4th, Comicbook.com reported that Toby McGuire was considered to lend his voice to Spider-Man: Into The Spider-Verse… or as I call it; Flashpoint Spider-Man.  Though nothing ever came to fruition, McGuire would have played an older Peter Parker.  Which I guess makes sense but in all honesty, a golden opportunity was missed here.

What opportunity was that?

The opportunity to resurrect who the internet has unofficially titled, Emo Peter Parker.  If you’re unfamiliar with the reference it stems from a brief period in Spider-Man 3 where our protagonist is succumbing to the supplemental powers his new black suit has to offer.  On top of heightened, heightened abilities, the symbiote trickled down to Peter’s everyday life, giving him a new found form of badassery.  An artificial personality rebirth, like when you’re dad buys a motorcycle after the divorce.

While Spider-Man 3 was God awful and I’m not recommending any other homages be made to that piece of crap.  However through memes, Emo Peter has taken on a new life.  This brief sequence from the movie has aged infinitely better than the movie itself.  Include the recent lighthearted making fun of Emo culture online, also a retrospective acceptance of the genre for sure.  A comedic nod to the worst Spider-Man anything is long over due.  Seriously, it was bad.

And the perfect person to make it happen would be Toby McGuire, also the studio… definitely need them.

We can hope right?

Spider-Man: Into The Spider-Verse arrives in theaters on December 14th.

The Avengers: EndGame Trailer Did Exactly What It’s Supposed To Do