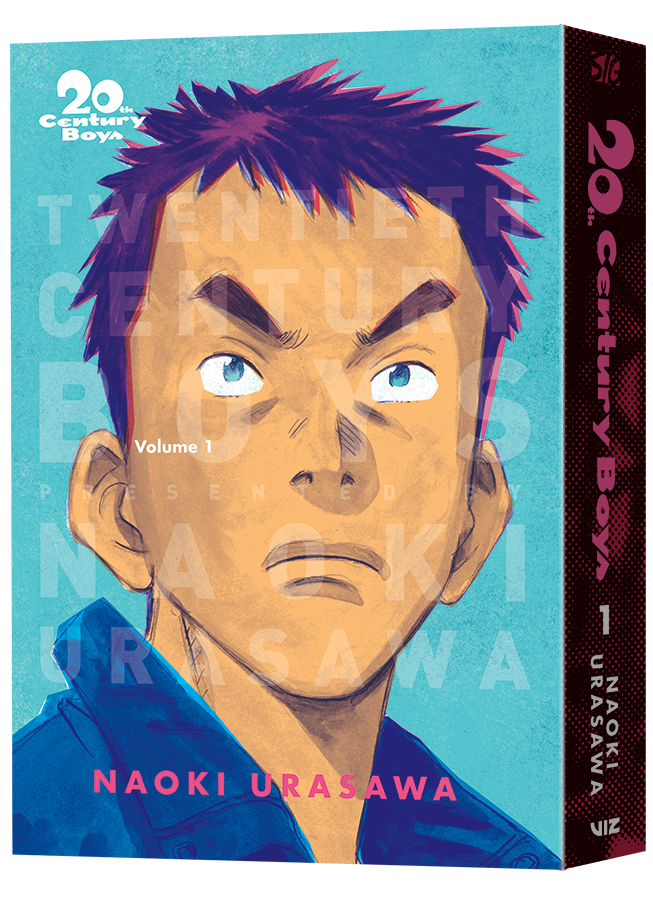 Nerdbot would like to thank Viz Media for providing an advance review copy of ‘20th Century Boys’ by Naoki Urasawa.

I think I have to start this review by saying that I have never read a manga as deeply rich and layered as Naoki’s Urasawa’s 20th Century Boys. And this new Perfect Edition from Viz Media is no joke. It’s 400 pages of some of the most unique and incredible artwork I’ve ever seen in my life.

A little backstory of the history of 20th Century Boys and the premise itself:

Back of book: “Humanity, having faced extinction at the end of the 20th century, would not have entered the new millennium if it weren’t for them. In 1969, during their youth, they creted a symbol. In 1997. As the coming disaster slowly starts to unfold, the symbol returns. This is the story of a group of boys who try to save the world.

20th Century Boys (20世紀少年 Nijūseiki Shōnen) is a Japanese manga series written and illustrated by Naoki Urasawa. It was originally serialized in Big Comic Spirits from 1999 to 2006, with the 249 chapters published into 22 tankōbon volumes by Shogakukan. In January 2007, a sixteen chapter continuation titled 21st Century Boys (21世紀少年 Nijūisseiki Shōnen) ran until July, and was gathered into two tankōbon.

A trilogy of live-action film adaptations, directed by Yukihiko Tsutsumi, were released in 2008 and 2009. The manga was licensed and released in English by Viz Media from 2009 to 2012, and distributed in Australasia by Madman Entertainment. The films were also licensed by Viz in North America and by 4Digital Media in the United Kingdom. 20th Century Boys has received critical acclaim and has 36 million copies in circulation.

In 1969, young boys Kenji, Otcho, Yoshitsune and Maruo build, in an empty field, a hideout they call their secret base, in which they and their friends can get together to share manga and stolen pornographic magazines and listen to a radio. To celebrate the event, Otcho draws a symbol for the base that would represent their friendship. After their friends Yukiji and Donkey join the gang, they imagine a future scenario where villains would try to destroy the world, and in which the boys would stand up and fight; this scenario is transcribed and labelled Book of Prophecy (よげんの書 Yogen no sho).

In 1997, Kenji Endō (a shop owner around 30 years old caring for his sister’s baby who he keeps strapped on his back) and his childhood friends notice a cult-leader known only as “Friend” is out to destroy the world, and it has something to do with their childhood memories. The series makes many references to a number of manga and anime from the 1960s-1970s, as well as to classic rock music, its title being taken from T. Rex’s song “20th Century Boy”.

The characters in this story are all extremely defined, even if it’s to the point of singularity. That’s not a bad thing! 20th Century Boys follows a sort of ‘movies from the 80s’ method of storytelling. The mystery unfolds as we jump around the timeline. The reader gets to see Kenji and his friends as kids, all energetic and enthusiastic. We see them as adults in 1997 trying to reconnect with their childhoods to help understand the impending danger of the cult leader and how he’s associated with this group of friends. One of the most exciting things about this book (because remember, this is only Perfect Edition Volume 1) is that we know there’s going to be a gnarly mess coming in the year 2000. I love stories that take a premise like “The world ends here” and it’s a slow burn toward that date. We get invested in the characters and their personage (and the many, many side stories that overlap and build to the core premise) all the while knowing (while they don’t) that something terrible is lurking around the corner.

I feel like there’s so much familiar material in here, yet the premise is unique and all its own. I’m reminded of Season One of The Legend of Korra (you know, the only good season) and even bits of what Stranger Things wants to be. I’m reminded of movies like Stand By Me, IT, and other films that depict a group of kids experiencing a thing and having to understand it again as adults.

I’m not sure how many of these ‘Perfect Edition’ books Viz Media will release. But I know that I completely plan on having them all because now I’m invested and need to know what’s happening in this rich and layered world.

I give 20th Century Boys Perfect Edition Vol. One 5/5 Stars.