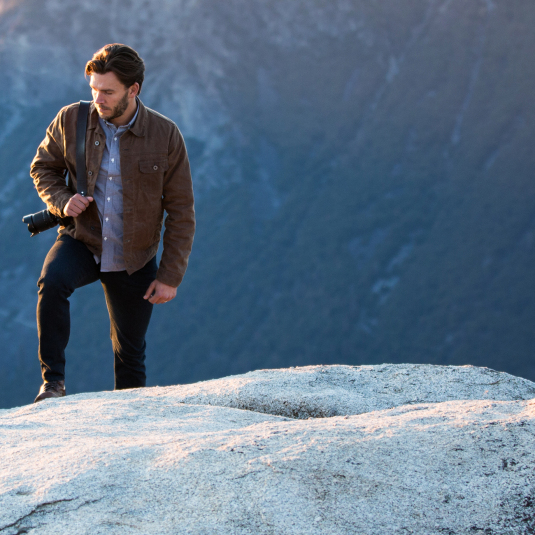 We all know at least one of them. Men, that is. Hell, I’m willing to bet that a good portion of you out there reading this are in fact men. But ultimately, as I’m sure you don’t need me to tell you, we’re all just people. A conglomerate amalgamation of a flesh-bag with complicated layers of experience and emotions that all manage to build up a personality. And most healthy, educated people will reassure you that there is no right or wrong way to be a man, to express your own sex and gender, and how to be the best possible version of you that you can be.

Unless of course, you’re a catalog aimed at men.

The truth is, I’ve (personally) always been wary of men’s advertising. Sure, women’s catalogs tend to have impossibly gorgeous models with unattainable body types, and all that craziness that feminist literature has been pointing out and tearing apart for years. And by no means am I discounting that or brushing it off. It’s important, critical scholarship. All media is subject to examination and dismantling. It’s an important part of being human.

But it’s men’s catalogs that really push me in an aggravated direction. More specifically, it was a catalog for an online clothing store called Huckberry that really sent my hate-recorder into rage mode.

I already have a theory that many (not all, of course) men are susceptible to any sort of “How to be a Man” media. After all, while women are freer to dress and behave however we want, it’s not an exaggeration to say that many men are held down by a predetermined set of rules and decorum that might be painfully stifling to many of them. Men’s masculinity and sexuality is constantly under the social microscope, and for all the freedoms that men have versus women, especially women of color, that’s just not one of the roles I would trade with them.

It looks terrible. This woman doesn’t want any of it.

But when this piece of trash catalog for a store I’d never even heard of showed up in my mailbox for whatever reason, I knew I couldn’t let it go without subjecting it to fire and thunder.

After I got my hands on this catalog I did some extra research. I poked around at other sites geared toward men, like Lucky Brand and Fossil to see what their agenda was. Sure, I knew I was going to find dudes modeling clothing, that’s a given. I even anticipated the “guy standing on a cliff side” shot, like our gentleman friend on the cover photo, wearing a fashionable jacket. That wasn’t a surprise. I mean, if they can do it with cars, they can do it with men, right?

The Giving Season: A Brief Overview in Manly Gifts

I thought maybe I was being too hard on the Huckberry advertisement. After all, they need to create a reality that causes their sales to spike, don’t they? But I was conflicted- who are they advertising to here? Are they aiming their products at outdoorsy hipsters? Are they trying to appeal to the manly-man?

The two pictures above are the most honest depiction of Christmas ever. This is all we need in life, man or woman.

But the Huckberry catalog disagreed, and educated me in the importance of gendered stocking-stuffers.

In addition to the physical catalog in my hand, I decided to peruse their website. And then I stumbled upon this.  And that’s when more hate manifested.

Look at this product being pushed. It’s called Mushroom Coffee. According to the product’s own website, it’s hocking GUILT-FREE COFFEE because there are minerals infused from some kind of anti-jittery-make-you-focus mushroom. Guilt free coffee? Are you serious? My only guilt with coffee is that I didn’t drink the whole pot myself! Of all the things we’re conditioned to be guilty for, it never would have occurred to me that we, or people, or men, are supposed to be guilty about the coffee we drink. Like, on the real, if the only hook you can use to sell your poop-shroom product is guilt, then that campaign can seriously step right off.

Here are just a few examples of selling points taken from the coffee manufacturer, Four Sigmatic’s, own website:

Nasty stomach burns? What are we talking here, coffee or crystal meth?

And a carry-on cocktail kit…for when it’s just time to give up.

In the name of research, I asked a few questions to a guy named Dave. Dave is a well-balanced dude. His interests lie in the vain of the nerdy, overall quiet and shy, but he is confident and charismatic enough to find his way around any crowd. I showed him the Huckberry catalog and asked him what he thought.

After sharing a laugh over the drink “The Dirty Snowman” being too manly to have real cream in it, he sheepishly admitted to wanting this keg product. Spoiler: No advertising should ever be so ridiculously gendered that you’re embarrassed to admit that you wouldn’t mind owning one of the products!

My work wasn’t done. I knew I had to call upon the forces of a different flavor of man. Now, I’ll pause here to say that my male friends are a varied, yet balanced group. Because, you know…they’re people. Only a few of them are really into sports, and about half of them participate in what society agrees are typical male behaviors.

I thought long and hard about all of my male friends before deciding it was time to call upon my manliest friend, Geoff. He’s the kind of guy that runs into burning buildings, flips off tornadoes, punches sharks in the face, dives into the ocean during rainstorms, skydives into a bed of nails, and wears tank tops in the snow.

In short, a renegade. I thought to myself, if this is trying to appeal to any demographic, it might be him. His feelings on the topic were nothing short of harrowing.

The conversation went as thus:

Loryn: “Hey- are you affected by advertisements?”

Geoff: “I don’t know what you’re talking about.”

Loryn: “I’m sending you a picture. Tell me what you think.”

A few beats of silence pass before a reluctant response appears.

Geoff: “I don’t know what to say. I want nothing to do with any of that. That jacket looks like a loser should be wearing it. And…duuuuurrrrr, tools.”

Took the words right out of my mouth.

Notions like the garbage Manly Manifesto, the recent call in publishing for Manly Science Fiction Works to “combat today’s depiction of the bumbling man” combined with terrible advertising trash like this probably leaves some men lost without knowing what to do. Hell, or even how to just be. Even moving past this one specific catalog, I was enraged by the way other advertisements try to categorize and compartmentalize men into these easy little categories.

But of course, it’s not just ridiculous Huckberry projecting these manufactured realities and personality types. Check out the ads below.

And yes, ads ran around Father’s Day and Christmas, for the sake of gift-giving, push this agenda more than other times of the year.

See all the different people you can just be? And the only one who gets to shovel down trash food is Dad because he’s surrendered to the gluttonous life.

But advertising like this isn’t smart. It isn’t healthy. It isn’t fair to men because it give them visual constraints about what it means to be men, how to be men, and what kind of grilling/drinking/adventurous lifestyle they need to have in order to be considered a real dude.

And it isn’t fair to women because why can’t I have beer, whiskey, and slingshots for Christmas, too?!?!

What are your favorite gifts and advertisements? Tell Nerdbot in the comments!