Showrunner Gray Haddock made the announcement today during RTX London, the company’s annual UK-focused counterpart to RTX Austin. “One of my favorite things about this #genlock announcement is I can finally follow @Maisie_Williams and not tip anyone off,” he joked after the announcement.

Williams will be voicing Cammie MacCloud, described in the newest teaser as a “young tech whiz” and “one of the most creative coders” Cyber-Ops had met. The teaser also offers a new glimpse at Japanese transfer recruit Kazu Iida, voiced by Koichi Yamadera (Ghost in the Shell, Cowboy Bebop), a former tank driver with a bit of a problem with authority.

According to Haddock, working with Williams is “as fun as it gets”. “Her energy and the sense of humor she brings to Cammie is an absolute delight. I’m running out of superlatives to describe how perfect this cast works for the characters, but Maisie truly sounds exactly like how Cammie does in my head — she’s brilliant.”

Although best known for her role in Game of Thrones, Williams is no stranger to voice acting. Earlier this year she provided the voice of Goona in Ardaman Studio’s British claymation film Early Days.

Williams joins a wide variety of actors already attached to the series. Michael B. Jordan will lead the cast as Julian Chase, a young fighter pilot turned candidate for the gen:LOCK program. Dakota Fanning (The Alienist) will play Miranda Worth, an expert pilot and love interest for Chase. Monica Rial (Dragonball Z, RWBY) will voice Col. Raquel Marin. David Tennant, heard in the teaser trailer, is Dr. Rufus “Doc” Weller, the inventor of the gen:LOCK technology who works with the Experimental Science Unit. 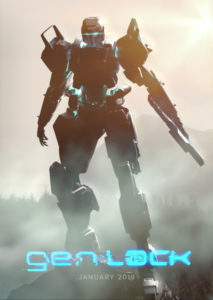 gen:LOCK focuses Earth’s last free society as they are on the losing side of a global war, who recruits a diverse team of young pilots to control the next-generation of mecha—giant, weaponized robot bodies. These daring recruits will find, however, that their newfound abilities come at no small cost.

It is expected to premiere January 2019.