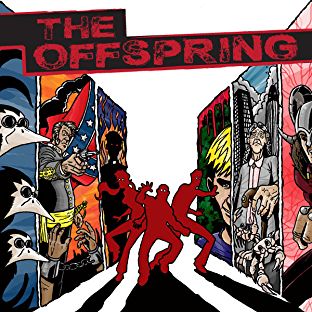 I met David Whalen when his art was brought to my attention via social media. Intrigued by the art style and impressed by his photos with physical copies of his comic book in hand, I was curious what his urban-fantasy comic ‘The Offspring’ was all about. David was more than accommodating to my curiosity, and provided not only two review copies (issues one and two), but provided the following information about his start up company, Correct Handed Productions.

‘The Offspring’ Issue One Description:

When three friends are reunited after years apart, they realize their hometown is not the quiet borough they once knew. Will, Vince and Sara must use their newfound abilities to rescue the children of their town from a man who will do anything to become immortal. 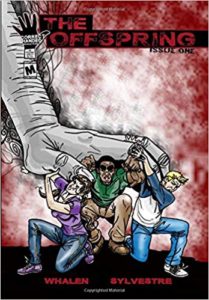 All right, so we have three friends with troubled pasts find that they have super powers of sorts. These powers must be used for good when they’re thrust into a world where a cult leader is kidnapping and murdering people under the guise of eternal life. All right- this is a familiar premise I can get behind. I was curious to see how this narrative unfolded, but first, I wanted to talk to David a little more about his company itself:

I started Correct Handed Productions a little over a year ago. I wanted the experience of starting a company and building a universe from the ground up. I chose the name Correct Handed Productions because I am left handed and have often made the joke that it’s not right and left handed It’s right and CORRECT handed and I felt that was a strong company name.

The Offspring is the culmination of years of writing and retooling and getting myself ready to tell a story about characters that I feel have real emotions driving them and real problems that can translate to people in the real world giving the three main characters a 3-dimensional feel. The main characters Will, Vince and Sara had troubled childhoods. WARNING Sara is a strong lead female character but does have to fight of an attempted rape. These childhood struggles inform their flawed adult life causing them to make bad choices time and time again. It’s when they meet up years later in their early 20’s that these three friends start to share a supernatural connection that brings them closer to each other but also brings trouble from unknown places.

I try to combine action, humor, horror (there is slasher type killing), drama, and sci-fi and place these characters in unbelievable circumstances that echo struggles others might face in the real world. 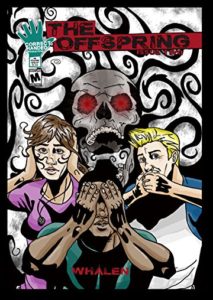 It’s easy to sort of pinpoint the cultural elements that influenced David leading up to him building his own comic book world. The art itself in ‘The Offspring’ is (and this isn’t a bad thing, it’s matter of fact) over-drawn in a sort of Aeon Flux fashion. The characters all bend in a little bit of an uncomfortable stop-motion style. It’s something like 90s Claymation, the way everything is super saturated and almost looks like it could melt. You know- just a little bit gnarly. Another style it reminded me of was Phoebe Gloeckner’s The Diary of a Teenage Girl: An Account in Words and Pictures, which was a fictional YA half graphic novel, half traditional novel. Something about the line work and mouths reminded me of that book as well.

Overall, Whalen’s world is easy to immerse into and it is engaging. The panels are clear and the text is easy to read. It’s not a bunch of visual noise, which I appreciate. The story telling, for me, doesn’t do anything new or revolutionary. But at the same time, it doesn’t do two things that are mood killers for me, which a lot of writers do accidentally at times. And that is 1. The Info Dump, and 2. The Laundry List. Whalen finds ways to reveal information about the world he’s slowly building without two characters dropping everything during a conversation about breakfast or something. Secondly, there are time jumps and organic scene leaps, which helps readers understand what else is happening in this world other than the reader simply following Vince, Will, and Sarah in a literal checkpoint fashion. The conflict is clearly laid out when we see the villain, a crazed man in power seeking immortality at the hand of human sacrifices. He’s also got some brainwashed followers who kidnap children, with a friend of theirs trying to find his little brother. 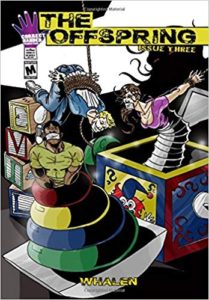 Plus, Will, Vince, and Sarah have a little old granny character who is something like their magical mentor. She reminds me of Mrs. Garett from Facts of Life, so that pleases and delights me to no end. A little old Magical Mrs. Garret. Every comic book should have this.

One area that confused me a bit was the way the magic powers were handled. I liked the fact that the world is set in reality and then it’s revealed the reader in a moment of high tension that “Hey, guess what, these three vigilante losers have supernatural abilities!”. It’s not addressed after this display of powers, which leads me to believe they’ve had these powers for a while and they are not learning about them for the first time; the reader is. I actually really like that, because sometimes we don’t need to see the origin story. Let’s get thrust into a world, quickly learn the rules, and go along for the ride. Perfect, no problem there. However, because the back of the book calls their powers ‘newfound’, it leads to me wonder if these displays of power are the first for the characters as well? But maybe I’m looking into it too deeply.

One weakness of the story is the handling of the character Sarah. The book opens with her being chased outside by her drunken father into a field of some sort, where he starts taking off his pants to rape her. Later in the story, after her guy friends pick her up from jail and take her to a dance club, she’s immediately preyed upon by two men who won’t back off. She screams at them that she’s had enough, and that’s when her burst of energy-magic comes forth from her. 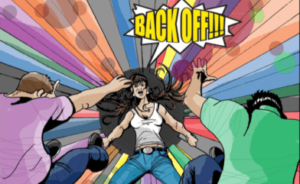 This treatment is the ‘Jennie from Forrest Gump/Beverly Marsh from IT’ approach to female plight in stories. It’s easy to fall back on and easy to write because it’s a flavor of troubled childhood/female dilemma that’s easy for people to consume/understand. But it’s not only a tired approach, but at this point, it’s dangerous. I would much prefer an O-ren Iishi from Kill Bill approach, where she saw some gnarliness that could have shattered her…but instead she became the leader of the troop that almost ended her. That is how you correctly demonstrate a strong female. Not someone who manages not to get raped multiple times and still manages to shrug the world off. This is a big detriment to the story; I’d like to see the men receive equal violation.

‘The Offspring’ by David Whalen shows promise, and it’s a nice addition to comics for someone like myself who is more of a manga/graphic novel person. The art and story compliment each other, and I did find myself wanting to continue into further issues to find out what everything building up will eventually mean.