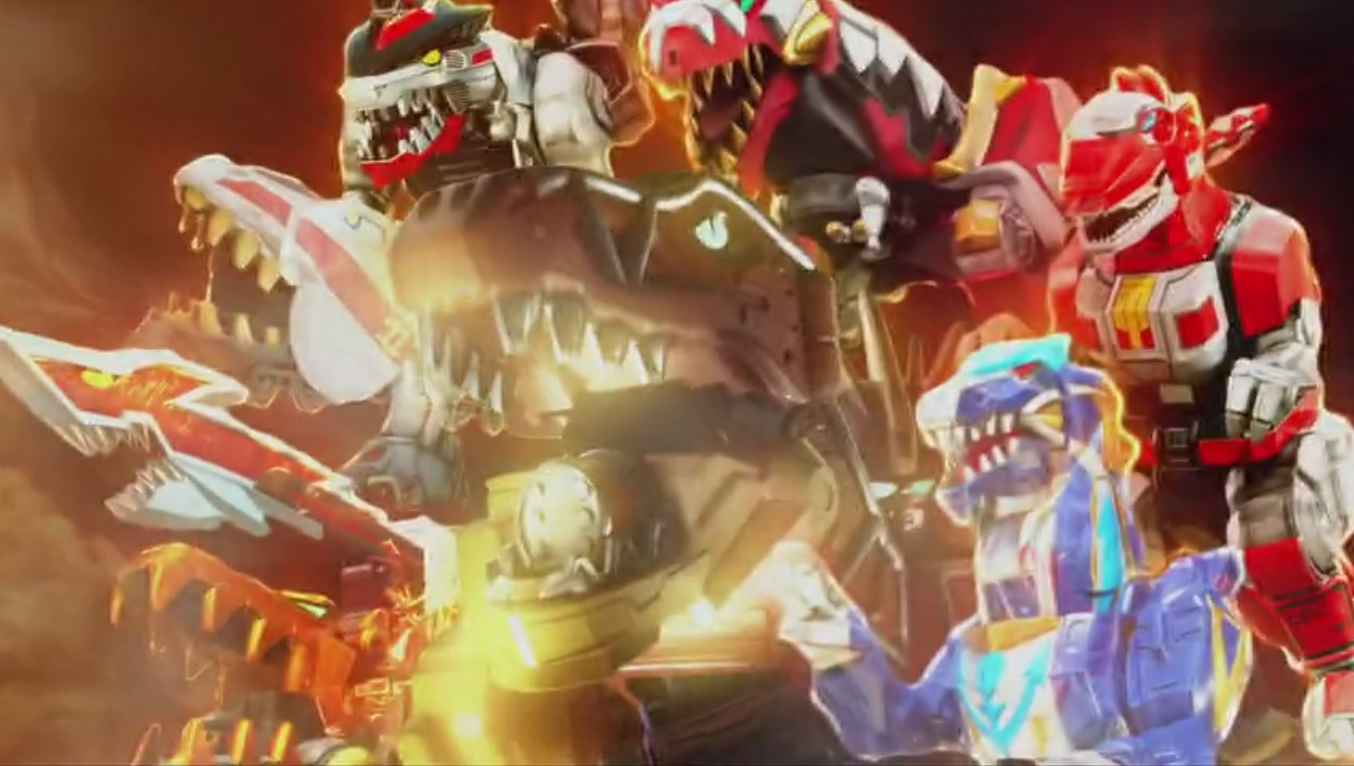 There are three things kids love above all else: dinosaurs, robots, and superheroes. So why not combine all three and have dinosaur robots piloted by superheroes? Toei’s Super Sentai franchise, known in the US as Power Rangers, had the good sense to do just that.

But no dinosaur is more revered in pop culture than the Tyrannosaurus rex, and Sentai has had their fair share of them. But which robot rex reigns supreme? Let’s count them down!

Ranking dead last is this stubby-legged little guy from 2009’s Samurai Sentai Shinkenger. Appearing as a movie exclusive, the Kyoryu Origami is summoned by Hyper Shinken Red to combine with main mech Shinkenoh to form…Shinkenoh with a lumpy hat.

Officially, the Kyoryu Origami is a Tyrannosaurus, but he sure doesn’t look it. The resemblance is so lacking that when the Power Rangers production team got a hold of it, they decided it was a shark instead. Even with the legs, “shark” rings more true here than “T-Rex.” In speaking of not looking like a T-Rex, here’s the Tyranno Header hailing from 2010’s Tensou Sentai Goseiger. This guy shares the same shortcomings as all the Header mecha: he’s literally just a head. A nondescript head, to boot. He could just as easily pass as a crocodile as he could a T-Rex.

He doesn’t offer much to the main robot, either, only forming a foot on Gosei Great. On a positive note, the wheels do provide giant robo roller skates, so that’s a plus. Another mech that only amounts to arms and legs is Engine T-Line from 2008’s Engine Sentai Go-Onger. Unearthed from ancient fossils alongside two other train mecha, T-Line is a beastly bullet train that speaks in roars and growls (which are understood by the heroes through Chewbacca logic).

Like the Tyranno Header, this Engine only consists of a face on wheels. But what a face! T-Line has major attitude factor in his gnarly grimace. If they had stuck it on a full T-Rex body, we’d have a contender for top spot! A movie exclusive from 2015’s Shuriken Sentai Ninninger, Dinomaru was one of the ninja team’s many auxiliary OtomoNin mechs. Dinomaru may be a bit slouchy and sad-looking in his T-Rex mode, but he makes up for it in versatility. He can not only transform into a humanoid minibot, but also combine with Shurikenjin to give him a drill, a hammer, and a vicious red visor. Cracking our top 5 is the red rex from 2003’s Bakuryuu Sentai Abaranger, nicknamed Tyranno. Arriving from the alternate dimension DinoEarth, Tyranno and his comrades search for humans with the power of Dino Guts to help fight the villainous Evolians.

While Tyranno mainly serves as the body of AbarenOh, he’s a lot more than just a robot component. He’s the only T-Rex on this list that can actually speak and with that comes a ton of personality. For that, we’ll forgive the fact that he’s rendered entirely in subpar, cartoonish CGI. Gaburincho! Lock and load with Gabutyra, a battery-powered beast from 2013’s Zyuden Sentai Kyoryuger. One of the ancient Zyudenryu strengthened by bravery and samba dancing, Gabutyra forms the majority of series mech Kyoryuzin (literally the whole body but the arms). He’s also the best partner a Red Ranger can ask for, shrinking down into a gun that powers up Kyoryu Red into his Carnival form.

But Gabutyra ranks so high because he’s just an excellent-looking dinosaur. If he wasn’t colored like the final evolution of a Happy Meal box, he’d be the most convincing T-Rex since Jurassic Park. You can barely tell that he’s a guy in a suit. Bonus points for being the only one to acknowledge that dinosaurs had feathers, as well. From across time and space, here’s GoZyuRex, Gokai Silver’s triple-threat machine from 2011’s Kaizoku Sentai Gokaiger. Able to transform between a drill-tipped time ship, a fire-breathing dinosaur, and a trident-fisted robot, GoZyuRex is a super robot for all seasons. And let’s be honest, how can you not love a robot whose finishing move is called Triple Drill Dream? It sounds like the best possible ice cream flavor, except three times as sweet and with extra dino-sprinkles on top. You knew this guy had to be close to the top. The original Sentai Tyrannosaurus, the red Guardian Beast originated from 1992’s Kyoryu Sentai Zyuranger. However, most fans in the States know him as the Tyrannosaurus Dinozord, the very first mecha from Mighty Morphin’ Power Rangers.

He may not look like how we imagine the T-Rex today, but he has just the right blend of retro robot charm to make him irresistible fans. That, along with his kangaroo kick and the way he rises out of magma every episode, makes this one tough to beat. There’s just one T-Rex that edges him out, though… What is it about Time Fire’s personal mech from 2000’s Mirai Sentai Timeranger that makes him take the top spot? Maybe it’s his design that mixes futuristic tech with animalistic fury. Maybe it’s the way he runs into battle like a beast out for blood. Or maybe I just love how amazing his theme song is (If you don’t know it, please look it up. It will improve your quality of life). Whichever way you want to slice it, V-Rex sets the bar that all these other mecha have to live up to.