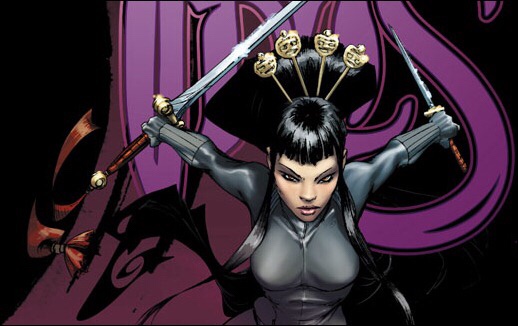 This week Nerdbot was fortunate enough to do a review trilogy of the latest from our friends at Aspen Comics. I got to check a brand new series called Artifact One as well as the most recent issue of the Soulfire saga. It has been a pleasure getting the opportunity to check out something other than the regular Marvel and DC heroes that populate the shelves of stores.

So for our final installment of this week’s round of Aspen Comics releases, we are going to discuss the new issue of Executive Assistant Iris. As this is also my introduction to the series, E.A. Iris tells the story of a badass killer assassin receptionist. That’s right, the corporate grind by day and an axe to grind by night. Hollywood has made this movie God only knows how many time but in the modern world of comics Iris stands out amongst the typical graphic archetypes.

We begin at the Magni Headquarters in Los Angeles where Iris is being “debriefed” after a recent mission. If you’re just jumping into the story, the first page provides us with our protagonist’s sort of resume as we learn she’s not only an assassin… but a dismantler of crime syndicates who brought the down two Yakuza clans in the same night. We also find out Mr. Mangi (the boss) doesn’t trust her and has delegated the debriefings to a super advanced lie detector machine.

Iris begins to describe a trip to Russia. Her task, take photographs of dead computer hackers and retrieve the Porosha Worm, a powerful virus capable of compromising data. After she does, a plane will pick her up at an extraction point. The stakes run high, if Iris doesn’t complete the mission she’s to be left stranded then declared a foreign spy to be hunted by the Russian government. Iris and her partner Mack get stopped at a checkpoint on their way to their destination. Things are about to get heated when Iris hands a fat stack of cash to one of the guards. Then they approach an underground bunker where the real meat of the story takes place.

Of course it’s not a friendly welcome as shots are fired. Iris and Mack have to force their way inside only to find themselves in a standoff. Punches are thrown, shots are fired, Mack takes a bullet to the shoulder. But they complete the mission then blow up the bunker. All is kind of well, for now.

We’re back to the debriefing room. Now the Porosha Worm is the focus of the discussion. Iris says she gave them the only copy of the virus. She passed the lie detector test then heads home to find Mack waiting for her. We discover what Iris said to the Magni people was a ruse and tomorrow they’re going to war.

For the closing installment of this week’s Aspen Comics reviews I’d say we’re leaving on a high note. Granted there’s nothing wrong with sci-fi/fantasy stories with creatures and technology. But a grounded, spy tale is a classic worthy of being told til the end of time.

What I like about E.A. Iris is it’s lack of superpowers. Sometimes, you just need a break from reading about special abilities and alter egos. If you include the movies, they’re everywhere. Almost as signature to comic inspired mediums as paper. In order for anything to keep it fresh, stories like this are essential to have in your stable. Which is why I have to throw Aspen some love here for being different.

Over the last week I have been fortunate enough to experience a different side of the comic industry. Read material unknown to me. Seen products I feel could stand with the mega stars of graphic art. Earlier I made a comment about an ACU (Aspen Cinematic Universe) and if the stars of the MCU or DECU ever burn out, I feel Hollywood has a ripe field to harvest in Aspen Comics.

What Non-Marvel or Non- DC comics do you read? Let Nerdbot know in the comments!!