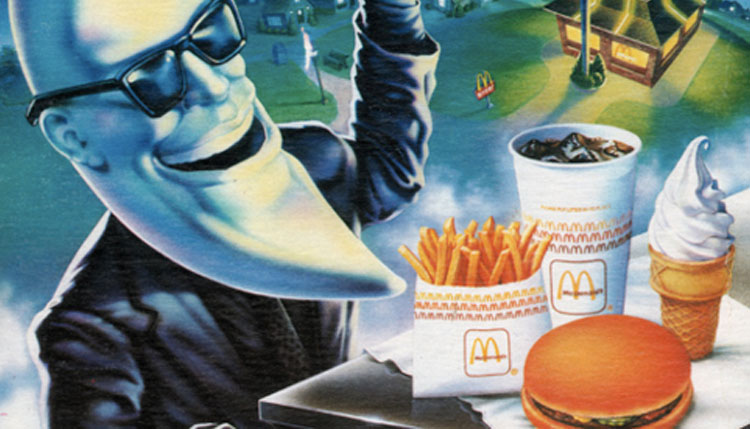 7 Commercials From the 80s (That We Wanted to Live Inside)

Fiction: It helps us imagine a better world. And when your real life is mundane, all you want to do is escape into a magical, fantastical world where anything is possible, robots feed you cereal, a moon man gives you hamburgers, and friends want to hang out with you. And nothing provided this feeling of excitement more than television commercials in the 1980s. Today on Nerdbot, we’re counting down the Top 7 Commercials from the 80s that we wanted to live inside!

7) Rice Krispies Showed Us the Future

This commercial was escapism at its finest. Just me, my robots, some synth effects, and all the cereal we could eat. It gave us hope that The Matrix was coming, and the magic of it was nothing short of glorious. It made me hope that someday I would get to live in TRON or something where everything existed on a 3D neon grid of electrical wires.

When I was a kid, this commercial was so haunting. It almost looked like a dystopian future where everything was ruled by the Overlord of Koolaid. Adults were locked in a dungeon somewhere and all we did was dance and drink Koolaid all day. If there’s any reality that looks like a kick in the pants, Kool Aid world is it.

5) Mac Tonight Peter-Pans At Your Window

While a lot of people might think the idea of a whistling moon man sneaking to their window is scary, I as a kid thought this commercial was very exciting. The idea of doing your homework in the dark and getting visited by Mac Tonight (and free dinner out of it) was super cool. To this day I’d be very all right with it if he haunted my window, but even as a kid there was a romantic (not sexual, weirdos) element to this commercial where I wondered what was going to happen after the camera stopped rolling. Maybe Mac will take Jim on some kind of Little Nemo nighttime adventure where he has to save a kingdom on a daring “Chosen One” adventure! Or maybe he’ll just get heartburn from that Big Mac. Probably the latter.

When you’re a kid, all you want is some attention. And that’s exactly what happens in this commercial. Clearly, that little boy is a magical McDonalds elf. He goes from beach to beach all summer long, bringing people together with his enchanted sand castle McDonalds creations. Everyone on vacation (that thing my family never went on) gather around him in awe of his talents, and then he feeds them. Magic is real, everyone is friends, and in the constructs of this commercial there is peace for everyone.

Ghosts are real and they play Nintendo. All we have to do is try to beat them. All day with our robot partner. That’s freakin’ cool.

The 80s Pocket Rockers commercial was the best. Early teenagers hanging out, collecting tapes, accessorizing, unsupervised. It seemed like the perfect set up to discover yourself, ride your bike, and hang out with your friends. Want to meet at the mall? Excellent! You have your Pocket Rockers ready for action! Want to grab some pizza before hitting the arcade? Radical! You’re Pocket Rocker ready! Commercials like these romanticize teenage hood in the 80s because you’re free, you’re young, and damn it you look good.

1) Zack the Lego Maniac and his Nerd Dungeon

If this commercial was remade in the exact same setting with a 35-40 year old man cast as Zack, I’d still think it was pretty cool. I knew as a kid that I wanted to go to Zack’s room and be his friend. We’d build Legos, talk about ROB the Robot, and when the 90s eventually happened, we’d watch Are You Afraid of the Dark? together. And as he got older and his mom said “Time to redecorate the room” we’d tell her she was insane, because that room is cool as hell and one day chicks will dig it. That’s the magic of Zack’s room. Because you know what? He’s a maniac.

What were your favorite “imagine a new world” commercials of yesteryear? Did any of these hold a special place in your heart? Tell Nerdbot about it in the comments and get the conversation going!