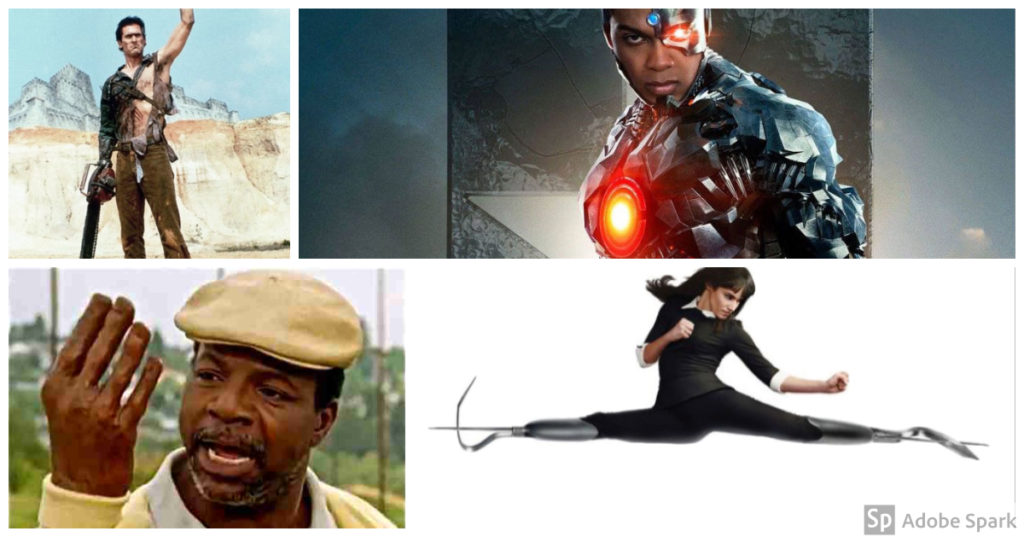 10 Most Epic Prosthetic Limbs in Movies

Unless you are not a fan of movies (and if so, who are you people?), chances are, you have seen a prosthetic limb pop up here or there. Most aren’t that exciting, but there are a glorious few that are the stars of the movie themselves.

Without further ado, here are the ten most iconic prosthetic limbs

Not that impressive of a hand mind you, but a classic.

The interesting thing about Furiosa’s arm is that she fights just fine without it- I mean, she gave Tom Hardy’s glorious face a sweet punch with her stump (which was delightful). The arm is nothing fancy, just like Furiosa herself.  Functionality and nothing else, it’s never really made a huge deal as far as character development, the arm is there just to help her kick some ass (as if she even needs help).

It is a vital part of the Star Wars universe, losing a limb. It happened so often, I could write an entire article on that alone, but this one was special. It was the first hand lost in the movies (not chronologically, because the Star Wars timeline is a thing of complicated beauty). This loss is significant in foreshadowing Luke’s future path as well as tying in the past of his father.

Um, it’s the name of the movie, so it’s safe to say that his hands (or lack thereof) are a pretty significant plot point…

Obviously, I’m not referring to the table-leg she sports early- on.

How much better prepared could you be in the event of a zombie apocalypse than to have an M4 Carbine and grenade launcher for a leg? Cherry wielded that thing like a boss.

We all let a tear fall when Bucky fell off of Zola’s train in Captain America, only to be caught completely off-guard when he popped up again as the brainwashed supervillain Winter Soldier sporting a righteous cybernetic arm. It has seen some changes over the years, but it was always awesome.

Silver had what was essentially a swiss-“arm”y *wink wink*, which would be super helpful as a chef/ mutinous crew member. In the end, however, Silver uses that arm for good-rescuing Jim and letting go of everything he ever wanted in order to do so, redeeming his character and by extension, his arm.

Cyborg is essentially ALL prosthetic limbs, which makes him awesome, and I’ll fight anyone who says any different.

Watch a single fight scene with the amazing Sofia Boutella as Gazelle and tell me I’m wrong (Spoiler alert: I’m not wrong).

A boomstick in your left hand, and a chainsaw for your right? It’s a pretty groovy way to handle the invasion of demons.

Did I miss any awesome prosthetic limbs? Let me know in the comments below!