Rooster Teeth has added another well known name to its upcoming sci-fi anime series gen:LOCK. David Tennant, known for his work on Doctor Who and Jessica Jones, has jumped back into the world of science fiction. Tennant will be lending his voice to Dr. Rufus Weller (aka “Doc”), the inventor of the technology used in gen:LOCK who works with the Experimental Science Unit.

Excited to announce that David Tennant is joining the voice cast of #genLOCK as Dr. Rufus Weller, aka Doc! pic.twitter.com/MY3YBblwil

Tennant is joining an ever expanding cast of star power for the series. Michael B. Jordan will lead the cast as Julian Chase, a young fighter pilot turned candidate for the gen:LOCK program. Dakota Fanning (The Alienist) will play Miranda Worth, an expert pilot and love interest for Chase, and Koichi Yamadera (Ghost in the Shell, Cowboy Bebop) will play Kazu Iida, a transfer from Japan’s military and fresh new recruit to the team. Finally, Monica Rial (Dragonball Z, RWBY) will voice Col. Raquel Marin.

Yes, we now live in a world where @michaelb4jordan is going to work with @RoosterTeeth #RTAnimation on a mecha show. Have a good day! #genLOCK pic.twitter.com/HyGd3yDrXJ

Excited to announce that Dakota Fanning is going to voice Miranda Worth in #genLOCK! pic.twitter.com/dt6hn9vaGr

Kōichi Yamadera (@yamachanoha) is also joining the cast of #genLOCK as the voice of Kazu Iida! pic.twitter.com/WZJx4E3NEn

gen:LOCK focuses Earth’s last free society as they are on the losing side of a global war, who recruits a diverse team of young pilots to control the next-generation of mecha—giant, weaponized robot bodies. These daring recruits will find, however, that their newfound abilities come at no small cost. 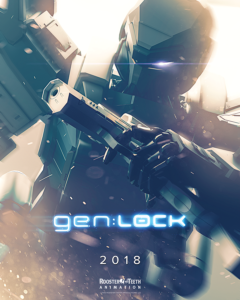 gen:LOCK was teased at the beginning of 2018, along with the new animated show Nomad of Nowhere. This will be the second anime-style series for the company following the popular RWBY series, and it will be the company’s third 3D animated series, which includes the well known series Red vs Blue which just finished its 16th season. Fans can anticipate a 2019 debut.