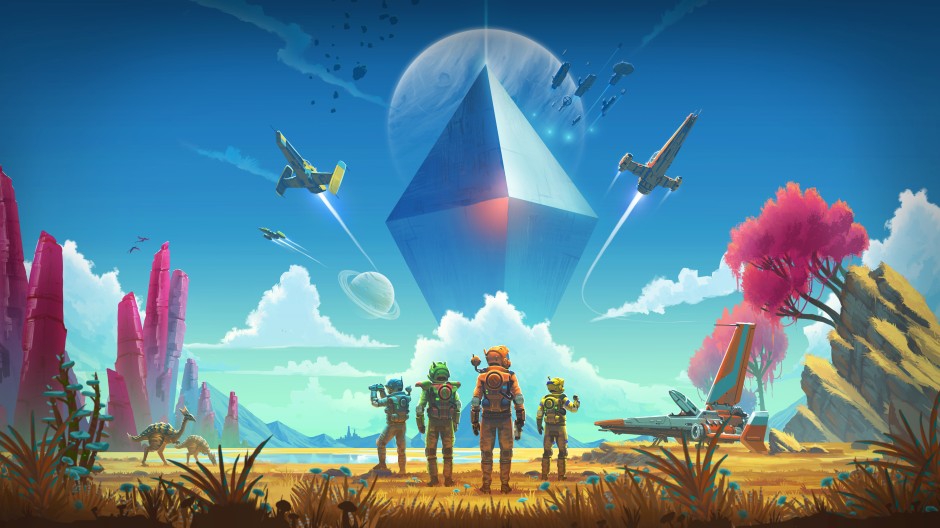 Why do we fall, Master Bruce? So we can learn to pick ourselves back up. So, that doesn’t have the same impact as it does when Michael Caine is speaking specifically to Batman, or at least someone named Bruce, but the idea behind it remains. No Man’s Sky is infamous for the amount of hate it got when it was first released. It failed to come close to deliver on a very big idea that you could explore a vast galaxy full of wonders and something new was around every corner.

Instead, we got the same kind of brown, kind of green planet with every animal doing mostly the same things across the galaxy. The universe was vast but ultimately thin. Bilbo Baggins wrote a great one-sentence review: “It’s like butter scraped across too much bread.”

With the release of No Man’s Sky Next, can this game come back from the fall?

In all fairness, the development team over at Hello Games has not been sitting idly by since the initial August 2016 release. They saw that they didn’t deliver on the premise they had presented and kept working on No Man’s Sky to make the game everyone was hoping for. Significant changes have trickled in from new vehicles to base building to elaborating on the strange giant red ball guide the players encounter in their travels.

Each of these were nice additions, but there was something still not quite right.

The No Man’s Sky update, simply known as Next, sets out to change the entire experience. It released July 24th, 2018 and I luckily just so happened to have the day off, and the original game ready to go. For someone who hasn’t really given the title a chance since the beginning, it was like stepping into an entirely different game in all the best ways.

The game starts much in the same way as it always had. You are a wayward explorer waking up on a planet entirely foreign to you with no memory or understanding as to how you got there. This is a completely random type of planet, and the dangers can range from annoying robots that just don’t like you, to radiation trying to eat through your suit to get at that them good good major organs.

Right away the game felt fresh. Back when the game first released, I shot across the galaxy trying to find a snow planet to play out my Hoth fantasies. Over and over the same funky greenish-reddish planets kept coming my way. All pretty much the same with essentially the same things to do. I awoke this time to what I had been searching for all along: a snowy landscape so cold I damn near died immediately.

The landscapes are one of the first things that stand out as you explore what would otherwise be a terrible reality to find yourself in. The textures feel like they have weight behind them and the horizon genuinely looks varied. It isn’t the same flatness with some weird floaty rocks and spires of minerals again and again. This time there are forests, mountains, clouds, valleys, and variety that drives the desire to explore.

This one screenshot I captured showcases that fresh feeling in a single moment. The landscape looks like something that isn’t Play-Doh, a storm front is moving out at the top there, and the alien sight of a planet with rings sits in the evening sky. It makes you want to shoot off into the stars.

The third person view makes a big difference for me personally. I love being able to see the character I’m playing hop around these alien worlds. Plus you get to look at your scanner on your shoulder that continually searches the area looking for something neat, and it’s just friggin’ adorable let’s be honest. I see many adventures for me and Scanner Bud.

This really hits when you get into space and take that Rogue Squadron, right behind your ship view while you desperately fly through some asteroids to escape this still super hard pirates that greet you in the void. Flying close to the ground, exploring what each planet has to offer, all while seeing your ship, is exciting and mesmerizing.

The Story of Base Building

As the main story/tutorial plays out, you are introduced to the base building aspect of the game. This was in the game before via other major updates but came with all kinds of restrictions. Now you can build a base on any planet, anywhere, however many you would like. Or at least more than one, so far. If you like that pristine view overlooking the ocean just before the firestorm hits your humble abode, then, by all means, settle down.

I decided to take in the crisp toxic morning air while overlooking the valley that held a lake that I probably won’t be keeping the fish out of anytime soon.

Look at those rings! (This was the planet seen from my snowy crash site)

The story itself seems a little more focused as well, leaning much harder into the quest surrounding the mysterious force guiding you through the beginning of your journey. This gives you the basics that you need to survive while giving you that deep sense of something very 2001: A Space Odyssey happening here.

The most significant change, of course, is the multiplayer feature. Now you and some friends can travel the stars together, watching each other’s backs for those pirates…or just be those pirates yourselves. You can, and probably will, encounter others in your travels even if you don’t have any friends logging on with you.

I ran into someone who must have been streaming their experience because he kept talking as if someone else was there in his wonderfully Australian accent. Either that or he was insane, you do you my down under dude.

Once someone is near you, you can automatically chat with each other via microphone. I didn’t have one/absolutely abhor talking to people online, it’s just a thing, so I utilized the new gestures that your space avatar can do. Surely there will be more coming down the line, but they worked for now, and I led the other lost traveler to my shelter to help keep him out of the radioactive storm that was probably not good to be out in.

This, of course, leads to the need to have some kind of visual representation of yourself in the world for others to see. You can customize your space adventurer in a variety of different equipment and colors and can even be one of the handful of alien races that you encounter along the way. I found an appearance station at a Star Base, and it cost nothing to get creative.

I, of course, went for as much of a Boba Fett look as I could pull off.

The game isn’t without its hiccups, all gushing aside. There’s still some lag and crazy sound scratches that hit my PS4 when I jumped to hyperspace or sometimes when I blasted into a planet’s atmosphere. Some of those sounds actually add to the faster than light experience, but they are definitely not supposed to be there.

The base building isn’t something I was able to fully explore in the handful of hours I put in, however, there’s some quality of life improvements that can happen there. The most glaring presented itself when I decided to delete a base, hoping to get my base computer back so that I could relocate. It deleted that and all the other equipment I had on the ground with it. Removing the base computer, okay I get that, but everything else that’s portable too? It was back to square one, and hopefully, you can learn from my mistake.

There’s plenty I couldn’t get to in the time I played. There are freighters that can act as your HQ in space which you can customize from the inside out and have a fleet of frigates at your command. There are still the rovers that can be built from a base that makes life much easier so that you don’t have to hoof it all over each planet. There’s still plenty of story that needs to unfold and hopefully it will lead me to some of these cool technologies.

The main point is that I am excited to hop back into the No Man’s Sky galaxy and see what is around the next corner. When the game first released, it was exploring to see when it was supposed to get really fun. It was relaxing, and there were things I liked about it, but ultimately it was an initial release let down.

If you haven’t played since the beginning, this is the time to get back in. The worlds feel real, and the exploration seems finally worth it. No Man’s Sky Next has absolutely picked itself back up and is learning from the mistakes of the past.

Now excuse me while I kiss the sky.

Have you given the new update yet? Share with Nerdbot your experiences exploring the stars in the comments below!