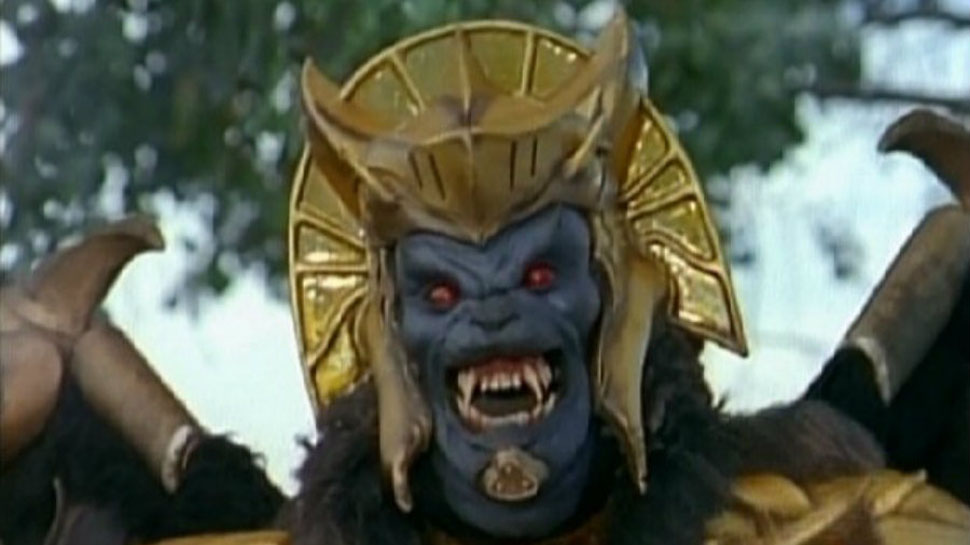 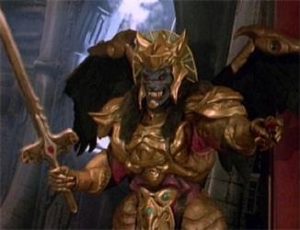 I started watching Mighty Morphin’ Power Rangers in 1994 and it quickly became one of my favorite shows. It had a blend of everything; corny drama, good looking actors, Japanese monster fight footage, transforming sentai action, and awesome robotic Megazords. All in all, a near perfect show in a nine year old’s eyes.

But one thing always stood out to me: the show’s choice of villain. First we had Rita Repulsa, or Bandora as she was known in the original Japanese Zyuranger footage. She was gorgeous, outlandish, always yelling, and that staff sure knew how to make those monsters grow. She was taken off assignment by Gwar-in-training baddie Lord Zed, who was all muscle-robot-skeletor man. Scary looking, not very scary in execution. But there was one character who stood out from the rest, who to me, was legitimately terrifying. And that character was Goldar.

Let’s begin at the elementary level: aesthetics. No one can deny that Goldar is terrifying looking. He’s a snarled-face evil cat-dog man with a growling nightmare voice. Rita on the other hand just looks like my childhood friend’s eccentric aunt. Plus, he hangs out for a while, lasting from the original Mighty Morphin’ season, through the whole Rita Saga, segueing into serving Lord Zedd, then hangs around for cameos in Zeo and In Space.

Goldar is resilient as the dickens!

When Rita and her gang break free from their 10,000 year imprisonment and declare that it’s time to conquer Earth, it’s Goldar who leads Rita’s first invasion of Angel Grove. Why would that be unless it’s because he’s more terrifying, evil, and intimidating than Rita. It’s not just as simple as “Well, Goldar is Rita’s lead warrior, and therefore he does her bidding.” Again, we know that Rita is fully capable of handling herself against the Rangers down on Earth. She’s gone there. We’ve seen her naughty little evil-sorceress sky-trike.

But you know what we’ve never seen her do? Make herself grow. Meanwhile, Goldar has grown to Megazord size, fought against the Power Rangers and their zord, and he wasn’t defeated. He held his own against their giant mech and escaped to live another day. And similarly, while Rita was triking through the sky, screaming from her wheeled-sky-spinner, what was Goldar doing?

That’s right- piloting his own freakin’ Megazord. Let me introduce you to Cyclopsis. Which he maneuvered Green Ranger style all on his own.

Other examples that Goldar is the villain we need to watch out for include the fact that when Lord Zedd returned, he didn’t banish Goldar along with Rita. In fact, he gave him back his wings and invited him to fight along his side. Zedd easily could have deemed Goldar trash and destroyed Rita’s entire empire and her minions. But instead, he kept him close. In the episode “Island of Illusion”, it’s Goldar who appears before the Rangers on the Island of Insecurities, not Rita. Part of their destruction was to revel in his image! Fan theory suggest Goldar might be royalty from Titan, Saturn’s moon, which would put him in higher ranks that either sorceress Rita or “Lord” Zedd. And lastly, you know how we should never mess with anyone’s parents? Well, in the original Japanese version of Mighty Morphin’ Power Rangers, the season called Zyuranger…

Goldar is a daddy.

Do you think Goldar was the real Mighty Morphin’ Power Rangers villain? Do you think this theory has merit? Tell Nerdbot in the comments and get the conversation going!