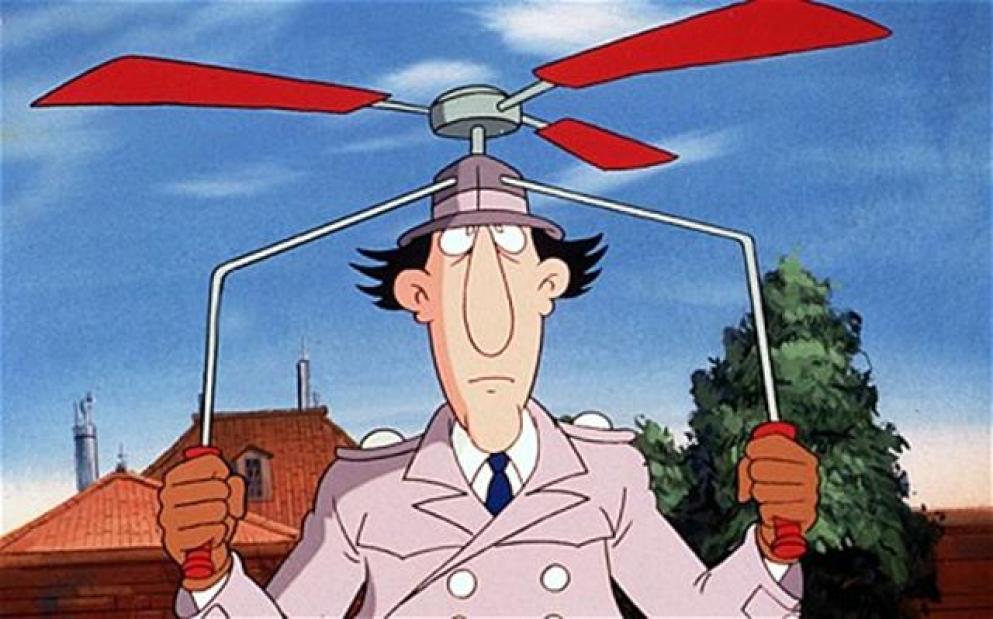 Inspector Gadget was a thirty-minute cartoon show from the 1980s produced by DIC Entertainment. The premise was simple: a cyborg man loaded up with spy gear was given a “Mission of the Day” from his boss. His goal? To solve the mystery and put a stop to the scheming Dr. Claw, his awesome spiked bracelet, his sneering cat, and his cronies of the day. However, the show wasn’t quite as simple as it appears. Because we have a theory. And our theory is that views were looking at the wrong villain the entire time. We shouldn’t have been watching Dr. Claw. We should have been watching…Chief Quimby.

Yes, at face value, we assume Dr. Claw is the evil supreme baddy in the Inspector Gadget universe. The signs are crystal clear: We mentioned the bracelet and the cat. How about the growling voice and computer that no one else ever would’ve been able to afford in nineteen-eighty-whenever the hell this show aired. All signs point to puuuuuuuure evil. But let’s stop and take a step back here for just a moment and really examine what’s going on in the Inspector Gadget universe. Let’s look at all the signs and clues this pseudo Robo-Cop mystery show is really trying to lay out in front of us.

First and foremost, let’s examine the fact that both Dr. Claw and Inspector Gadget himself appear to be augmented men. Cyborgs, if you will. One is programmed to do what he assumes is good, the other out for blood. But think about it- who is the nexus, the one in the center of every single battle between Dr. Claw and Inspector Gadget? The one who seems to know what Dr. Claw’s plans are before Claw’s cronies can even start smuggling baseballs full of poisoned gum onto planes or out of jail or whatever weird child-friendly scenes happened in that show?

That’s right, friends. Chief Quimby, the main villain we should have been watching all along. There’s a popular Reddit fan theory claiming that Chief Quimby is in fact Dr. Claw. Here’s another stating that Penny is Claw’s daughter and she’s Gadget’s creator, his mother. Then, there’s another on Cracked stating that Dr. Claw was once the original Gadget and he’s angry because he’s been replaced. But here at Nerdbot, we’re going to tell you today why that’s completely false. And trust- around here, we’re insane enough that we don’t have to borrow anyone else’s fan theories. There are too many surrounding factors, and there’s no way that Quimby could possibly have time to sit at a chair for hours, conduct naughties from the comfort of his claw, all while giving Gadget duties via explosive fire-bomb papers. No, that wouldn’t work. As mentioned earlier, Chief Quimby isn’t Dr. Claw, but more of a Puppet Master, pulling strings and conducting all the evil we see throughout the series.

Let’s start with simple physical traits. It’s easy to see that Penny is Chief Quimby’s daughter. They have the exact same coloring. So Quimby, in his spare time, isn’t even a chief. He’s an inventor. Chief is the role he takes on so his poor, confused creation Gadget doesn’t get his programming crossed and start asking questions. As for Penny, Quimby gives his (very bright daughter, no question there) and her genius dog (who we may go back and decide is a robot too, but that’s another story) to watch over his broken, bumbling creation and make sure he doesn’t die.

Come on, poor Gadget has a helicopter stuffed into his brain. A cell phone in his hand. All that radiation? The dude doesn’t stand a chance. His algorithms are all messed up all the time. But the actual tech? It’s working fine. And the actual tech is what Quimby needs to keep on functioning. But Gadget won’t just bust out his equipment without being triggered. That’s not how a field test works. Gadget’s programming insists that true danger must be present in order for the technology to initiate. Enter Dr. Claw. “Chief” Scientist Quimby created a second cyborg robot man, quite possibly from another cop or detective who died on the scene, doesn’t matter. He programmed him with pure evil coursing through those circuits and then…strapped him down to a chair. Because if the cyborg man who is Dr. Claw was able to actually get up…who knows what disasters would explode. Who knows what technology the chief had stuffed inside Claw? So when Dr. Claw growls his daily catchphrase of “I’ll get you next time, Gadget…next time.” You know it’s totally true.

Because he wasn’t programmed to do anything else.