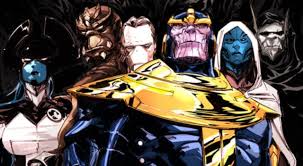 It’s an exciting year for Marvel fans. The success of Black Panther paved the way for the much anticipated Infinity War being released on April 27th, 2018. The culmination of ten years of movies that explored characters such as Captain America, Thor, Iron Man and many more to get us to this point. In this series I wanted to give a back story to Thanos’ henchmen, the Black Order. Since the introduction at Disney’s D23 expo with the super imposing statues, many people are excited but want to know more about his gang. The Black Order is a relatively new addition to the marvel landscape, first appearing in New Avengers Vol. 3 #8 in 2013. Not much of a back story is given to us but what we do know is the Black Order is a group of lethal aliens gathered by Thanos to help him raze different worlds and force them to pay tribute to him. I highly suggest reading these stories if possible because there is some crazy situations that involve everyone from the Avengers to the X-men and everyone in between. The introduction of the Black Order was Thanos’ ploy to kill all 16-22 years old boys that might be his son, eventually threatening his rule (yes, Thanos was a rolling stone). They systematically murdered millions and did so with conviction for their master.

First, let’s talk about Corvus Glaive, Thanos’ right hand. Corvus’s powers aren’t that impressive, he has super strength, speed and intelligence. What makes him special is his glaive which grants him immortality as long as it’s not destroyed. His role is essentially, the general of the group, giving orders and direction based on Thanos’ will. I feel, in the movie, we will see him show up by himself in a cocky, nobody-can-touch-me sort of way to bring the word of Thanos’ arrival. Guaranteed he’s coming down on the Avengers like a bat-out-of-hell.

Next is Proxima Midnight, she is the wife of Corvus Glaive. She’s arguably the best combatant in Thanos’ army. Of course she has super strength, endurance, and speed because what bad-ass wife of a bad-ass general doesn’t? But here’s what makes her special, she has a spear that’s made from a sun trapped in distorted space. It acts like a star, supernova and black hole all at once!! WHAT!!!!! If she hurls this spear at you and it connects, you’re getting hit with the energy of the sun. The spear also, (as if it isnt enough) carries a lethal toxin that can kill organic and energy based life forms in seconds. If that doesn’t impress you, in the comics she stabs the Hulk, yes ,the big green guy who has almost unlimited power, makes him revert back to Bruce Banner, instantaneously.

Can it get better? Well, you can bet your Infinity stones it can!!!! Ebony Maw is next. Now traditionally you would think Thanos’ squad would be a bunch of soldiers with brute force, not in Ebony Maw’s case. He’s comparable to a mage of sorts, more of a thinker and strategist. He was dispatched to deal with probably the biggest threat to Thanos, Dr. Strange. Now, if your unfamiliar with the good doctor and you haven’t seen Marvel’s 2016 movie, Dr. Strange is one of the most powerful beings in existence. Cosmic entities from Galactus to the Celestials fear him. With that being said, Ebony Maw easily mind controls him in the comics…crazy right? He does it with ease too, as well as controlling him around the likes of Professor X who could’ve easily seen through the ruse, but didn’t. Ebony Maw has super-genius class intelligence with manipulation and is known as a “black tongue that spreads evil and mischief wherever he goes”. Getting excited yet??!!! Well, there’s one more we have to explore, his name, Black Dwarf. He is the brother to Corvus Glaive, and the power-house soldier for Thanos. Surprisingly, when Thanos sent him to Wakanda to steal one the Infinity stones, he was defeated by Black Panther. Not to down-play his prowess at all, he has super-strength, durability and his skin is unbreakable. Based off the trailer it seems the movie will vaguely follow the comic line with a war in Wakanda early on. Quick note, in the movie, Black Dwarf is called Cull Obsidian. In the comics, the group is called Cull Obsidian. Marvel decided to change the name last minute to avoid confusion with Black Dwarf, Black Panther. So there you have it, the Black Order. Definitely going to be an issue for the collection of heroes. Also, there is two more members of the group, Super Giant and Black Swan. Based on the pictures from D23, they wont be in it but if from now to the release date they get introduced, I will be doing an update article, so stay tuned.

Who’s your favorite out of the group? Who do you think can go toe-to-toe with them? Let Nerdbot know in the comments below!!!!